Located in the eastern part of the Thuringian Basin, the Cathedral of Naumburg, whose construction began in 1028, is an outstanding testimony to medieval art and architecture. Its Romanesque structure, flanked by two Gothic choirs, demonstrates the stylistic transition from late Romanesque to early Gothic. The west choir, dating to the first half of the 13th century, reflects changes in religious practice and the appearance of science and nature in the figurative arts. The choir and life-size sculptures of the founders of the Cathedral are masterpieces of the workshop known as the ‘Naumburg Master’. 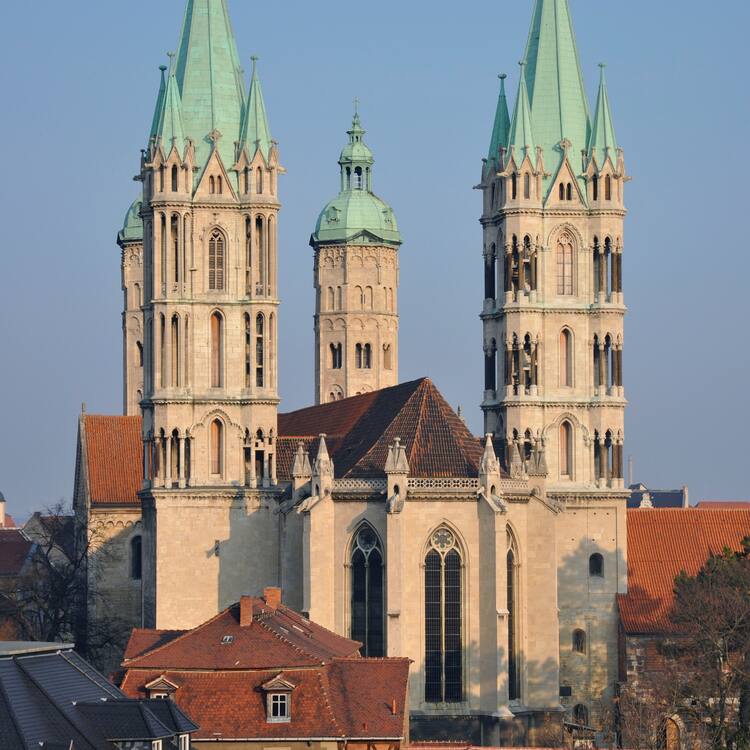 Naumburg Cathedral, located in the south of the State of Saxony-Anhalt, is a unique testimony to medieval art and architecture. Most of the church building dates back to the 13th century. It is composed of a basilical Romanesque nave flanked by two Gothic choirs in the east and in the west. The west choir with the famous portrait statues of the twelve cathedral founders and the west rood screen are the masterpieces of pan-European workshop accordingly named the “Naumburg Master”, who conceptualized all parts of the western choir as a whole, and carried out the western choir from the bottom to the roof within six years only. The polychrome reliefs and sculptures of the choir and the rood screen count among the most significant sculptures of the Middle Ages. The overall iconographic concept and the harmonious combination of architecture, sculpture and glass paintings reflect in a unique way the profound changes in the religious practice and the visual arts of the 13th century. These changes resulted in a hitherto unknown realism and observation of nature, as well as in the recourse to ancient sources.

Criterion (i): The episcopal church of Naumburg is unique among the medieval cathedrals due to the west choir conceptualized and designed by a brilliant sculptor – the “Naumburg Master” – and his workshop. The organic combination of architecture, sculpture and glass paintings created an extraordinary synthesis of the arts. The twelve life-sized, colored founder figures in the west choir, the passion reliefs of the west rood screen, the crucifixion group on its portal and the numerous capitals are outstanding examples of the architectural sculpture of the Middle Ages. One of the founder figures – Uta of Ballenstedt – is considered as one of the icons of Gothic sculpture. They are sculpted from the same blocks of stone as the pillar strips, and the various media are integrated in the fabric of the architecture and its manner of construction. A single intelligence stood behind the integrated conception of the architecture, sculpture, and stained glass and merged them into one integral piece of work.

Criterion (ii): The workshop organization of sculptors and stonemasons was established in the early 13th century and is known under the name Naumburg Master. It constitutes one of the decisive conveyors and pioneers of the ground-breaking innovations in architecture and sculpture in the second half of the 13th century. The migration of the workshop of the Naumburg Master, from northeastern France through the Middle Rhine areas to the eastern boundaries of the Holy Roman Empire and further to southwestern Europe, gives testimony to the extensive European cultural exchange during the High Middle Ages.

The inscribed property contains all the attributes necessary to convey its Outstanding Universal Value, primarily, the Cathedral and associated architectural elements, sculptures and artworks, all retained in their original layout. The structural elements of the 13th century are intact and do not suffer from adverse effects of development or neglect. The visual qualities and functional relations to the surrounding urban and cultural landscape are undisturbed. The buffer zone reflects the urban morphology of the old town of Naumburg.

The authenticity of Naumburg Cathedral is demonstrated by the intact materials and form of the Cathedral and associated buildings, artworks and sculptures, which date to the High Middle Ages. All repairs have utilized stone from the original quarries used to build the Cathedral, and restoration works have occurred since the 19th century. The building has maintained its original functions, and services are conducted regularly. The location and setting of the cathedral within the centre of the old town of Naumburg is unchanged, and overall, the property demonstrates a good state of conservation.

Naumburg Cathedral is protected by the Act for the Protection of Historic Monuments and Buildings of the State of Saxony-Anhalt (DenkmSchG LSA), which is the highest possible level of legal protection available. The Federal Building Code and Regional Planning Act support the protection of the property through the regulation of new development. All cultural monuments and sites within the buffer zone are listed in the register of monuments by the Federal State of Saxony-Anhalt. Building activities in the buffer zone are subject to land development plans, building development plans and municipal statutes. The town development plans of the city of Naumburg are basic instruments for sustainable tourism.

The cathedral and adjacent buildings are owned by the Combined Cathedral Chapters (Combined Chapters of the Cathedrals of Merseburg and Naumburg and the Collegiate Church of Zeitz). This public foundation is responsible for the protection and conservation of the cultural monuments entrusted to its care. The conservation and maintenance works on the building and the general management of the property are carried out by the owner in close cooperation with the State Ministry of Culture of Saxony-Anhalt and the City of Naumburg.

There are few pressures identified that impact on the Outstanding Universal Value of Naumburg Cathedral, although a range of factors require ongoing management, such as traffic issues and air pollution. Current and expected visitation to the property is well-managed and within the estimated carrying capacity, which is regularly reviewed.

There is no Management Plan for the inscribed property, a Management Plan was prepared in 2014 for a larger cultural landscape in which the cathedral is located and provides some general orientations. An adequate system for monitoring the state of conservation is in place.

The Saale-Unstrut World Heritage Association was founded in 2008 to guide the processes of World Heritage nomination and provides an avenue of participation for community interests, including both private and public stakeholders.

An international visitor centre is planned within the inscribed property, although the specific proposal is yet to be forwarded to the World Heritage Centre for review in accordance with Paragraph 172 of the Operational Guidelines.