Pergamon and its Multi-Layered Cultural Landscape

Pergamon and its Multi-Layered Cultural Landscape

This site rises high above the Bakirçay Plain in Turkey’s Aegean region. The acropolis of Pergamon was the capital of the Hellenistic Attalid dynasty, a major centre of learning in the ancient world. Monumental temples, theatres, stoa or porticoes, gymnasium, altar and library were set into the sloping terrain surrounded by an extensive city wall. The rock-cut Kybele Sanctuary lies to the north-west on another hill visually linked to the acropolis. Later the city became capital of the Roman province of Asia known for its Asclepieion healing centre. The acropolis crowns a landscape containing burial mounds and remains of the Roman, Byzantine and Ottoman empires in and around the modern town of Bergama on the lower slopes. 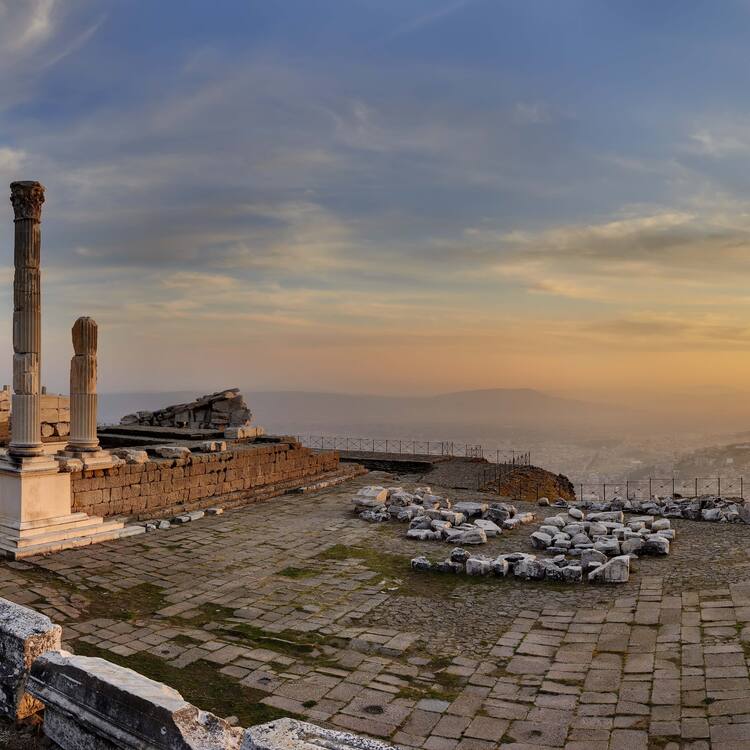 Pergamon was founded in the 3rd century BC as the capital of the Attalid dynasty. Located in the Aegean Region, the heart of the Antique World, and at the crossroads between Europe and the Middle East, it became an important cultural, scientific and political centre. Creation of the capital on top of Kale Hill set the scene for the city. High steep sloping terrain and the Bakırçay Plain were integrated into the urban plan. The exceptional composition of monuments includes the extremely steep theatre, the lengthy stoa, a three-terraced Gymnasium, the Great Altar of Pergamon, the tumuli, pressured water pipelines, the city walls, and the Kybele Sanctuary which was perfectly aligned with Kale Hill. As the Attalid capital, Pergamon was the protector of cities in the Hellenistic Period. It had political and artistic power and built up a very intense relationship with its contemporary civilisations. The dynasty founded one of the largest libraries in Pergamon, and the rivalry between three Hellenistic dynasties caused the Attalid Dynasty to create the famous sculpture school.

After the city was passed to the Romans in 133 BC, Pergamon became a metropolis and was the capital of the Roman Province of Asia during the Roman imperial period. The Romans maintained the already existing structures of the Hellenistic Period while adding new functions as a cultural and imperial cult centre of the empire. Consequently, during the Roman Period, many important structures were built or further developed, including the Asclepion Sanctuary, a well-known healing centre whose sacred spring still flows; the Roman Theatre; one of the largest Roman amphitheatres; a great aqueduct; the Trajan Temple and the Serapeum. During the Byzantine Period due to the relocation of the trade roads and political centres from the Aegean Region to northwest Anatolia, especially to İstanbul (Constantinople), Pergamon was transformed from a major Hellenistic and Roman centre into a middle-sized town, and continued its cultural-religious importance as home to one of the Seven Churches of Asia. Pergamon now preserves and presents this transformation.

After the arrival of the Ottomans, Pergamon experienced one more cultural adjustment, which is especially evident on the Bakırçay Plain. The Ottomans provided the city with all necessary urban structures, such as mosques, baths, bridges, khans, bedestens (covered bazaars), arastas (Ottoman markets) and water systems overlaying the Roman and Byzantine settlement layers. The superimposition of all these different periods and cultures through continuous habitation in Pergamon, finds its reflection in Pergamon’s urban form and architecture as continuities, formations, transformations and losses due to the material existence and use of space by different eras and cultures. The re-use of structures by later cultures is particularly demonstrated by the Church of St. John, formerly part of the Serapeum, a sanctuary dedicated by the Romans to an Egyptian deity. It subsequently became an Ottoman Mosque as well as incorporating a Jewish Synagogue.

From the 3rd century BC onwards, the city was encircled by a ring of grave mounds of various sizes, which demonstrated Pergamon’s claim to the plain of Bakırçay. In addition to grave mounds, there were sanctuaries, such as the Kybele Sanctuary at Kapıkaya, sited on prominent hills and mountain peaks in the area surrounding the city. Pergamon is a testimony to the unique and integrated aesthetic achievement of the civilizations. It incorporates Hellenistic, Roman, Byzantine and Ottoman structures, reflecting Paganism, Christianity, Judaism and Islam; preserving their cultural features within the historical landscape.

Criterion (i): The building of Pergamon into the slopes at the top of Kale Hill, exploiting the topography with manmade terraces and grand monuments dominating the surrounding plain, is a masterpiece of Hellenistic and Roman urban planning and design. The acropolis remained as Pergamon’s crown while the city developed on the lower slopes during the Byzantine and Ottoman periods, extending its domination of the landscape.

Criterion (ii): The urban planning, architectural and engineering works of Pergamon reflect a synthesis nourished from the cumulative background of Anatolia. The Kybele Sanctuary at Kapıkaya, with local Anatolian roots, represents the continual use, synthesis of cultures and interchange of human values through time. The Serapeum, a Roman temple dedicated to an Egyptian deity exhibits the interchange of human values, as did the relocation of the Kybele meteorite to Rome, facilitated by the Attalids.

Criterion (iii): ‘Pergamon and its Multi-layered Cultural Landscape’ bears unique and exceptional testimony to Hellenistic urban and landscape planning. The architectural monuments including the Asclepion, Serapis Temple and Sanctuary, Kybele Sanctuary at Kapıkaya and Tumuli are exceptional testimonies to their period, culture and civilization.

Criterion (iv): The acropolis of Pergamon, with its urban planning and architectural remains is an outstanding ensemble of the Hellenistic Period. The Serapis Temple and Sanctuary, Asclepion, water supply system and amphitheatre combine to illustrate the Roman period in Anatolia as a significant stage in history.‘Pergamon and its Multi-layered Cultural Landscape’ is an outstanding historic urban landscape illustrating significant stages of human existence in the geography to which it belongs.

Criterion (vi): Pergamon is associated with important people, schools, ideas and traditions concerning art, architecture, planning, religion and science. The Pergamon sculpture school contributed the ‘Pergamon style’. The Kybele Cult represents a continual tradition and belief in Anatolia.  Due to the consequent settling of Romans in Anatolia, following transfer of the Kybele cult idol to Rome by Pergamon’s Attalid king and the subsequent inheritance by Rome of Pergamon due to Attalid bequest in 133 BC,  Pergamon is directly associated with the creation of an eastern Roman empire. The continual religious use of the Temple of Serapis, which was first constructed as a temple during the Roman period, converted and used as a church during late Roman and Byzantine periods, while one of its rotunda was used as a synagogue, and which then continued to be used but as a mosque beginning from 13th century onwards, is an example of the continuity of use for religious purposes at a particular place. The physician, surgeon and philosopher Galen was trained in Pergamon and his works were disseminated from there. Last but not least, there is the tradition of production of Parchment specific to Pergamon.

Different Components of ‘Pergamon and its Multi-layered Cultural Landscape’ meet the conditions of authenticity through different attributes. The Hellenistic settlement at Kale Hill, the Asclepion, the Amphitheatre and Roman theatre have authenticity in form and design, materials, substance and location . The setting of the Hellenistic and Roman remains on Kale Hill is impacted by the funicular railway along the east side of the hill.

The authenticity of the Serapis Temple and sanctuary and its subsequent uses is expressed through the form and design, materials and substance of the archaeological remains. The Ottoman period buildings are being conserved according to good practice. The layout of the Ottoman town is preserved, but the authenticity of its setting is impacted by the development in the urban area that occurred during the last quarter of the 20th century. Roman ruins within the Ottoman town are preserved.

The authenticity of Component 2 Kybele Sanctuary at Kapıkaya is expressed through form and design, materials and substance, traditions, techniques, location and setting as well as spirit and feeling. When the tumuli are considered as the reflection of power in the natural territory of Pergamon in Antiquity, they altogether possess an authenticity in meaning and design of the cultural landscape. Components 1 & 7 have been impacted by illegal construction and component 8 by illegal excavation.

The entire first degree archaeological sites within the World Heritage nominated property including Kale Hill, the aqueducts, the Asclepion, the Musalla Mezarlık Roman Pleasure district, the Serapeum, the tumuli and Kybele rock-cut Sanctuary, and the urban sites are under protection of National Preservation Law, no.2863. All monuments within the urban sites are also protected by National Preservation Law no.2863. These urban sites mostly form the Ottoman neighbourhoods and trading areas and most have second or third degree archaeological site status. Any and all kinds of conservation, preservation or construction works related to the monuments, within the archaeological and/or urban site, are subject to approval from the Regional Conservation Council-2.

Bergama Municipality prepared an Urban Conservation Plan in 2012 to preserve the urban site in a unified way with its neighbourhood.  Street facades and traditional structuring details including techniques, materials used, lay-out and setting were all taken into account.

Management of the nominated property is co-ordinated by Bergama Municipality World Heritage Management Office, which was established at the end of 2011, and by the ‘’Advisory Body’’ and “Coordination and Supervision Body’’ which are responsible for approving and implementing the management plan and on which state and local administrative institutions, universities, NGOs and representative of muhktars are represented. A site manager has been appointed. Apart from the present preservation and conservation system the World Heritage Management Office and the relevant bodies have started to prepare a management plan, which will be the main guide for co-operation and comprehensive monitoring of the entire World Heritage Property and is planned to be completed at the beginning of 2016.
News 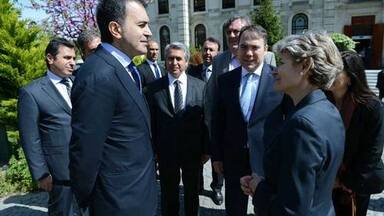