Monumental Earthworks of Poverty Point owes its name to a 19th-century plantation close to the site, which is in the Lower Mississippi Valley on a slightly elevated and narrow landform. The complex comprises five mounds, six concentric semi-elliptical ridges separated by shallow depressions and a central plaza. It was created and used for residential and ceremonial purposes by a society of hunter fisher-gatherers between 3700 and 3100 BP. It is a remarkable achievement in earthen construction in North America that was unsurpassed for at least 2,000 years. 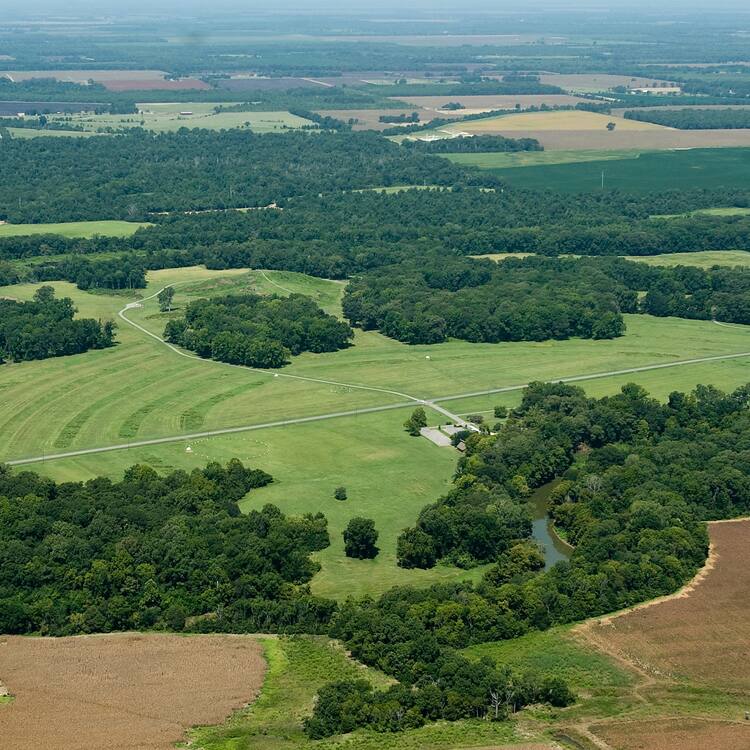 The Monumental Earthworks of Poverty Point is a publicly-owned and managed archaeological park in the parish of West Carroll, State of Louisiana, United States of America. The site is located on the eastern edge of an elevated landform, Macon Ridge, in the Lower Mississippi Valley. Today the ridge, which is about 7-9m higher than the adjacent lowlands to the east, overlooks and is abutted on its eastern side by the Bayou Maҫon.

The site consists of an integrated complex of earthen monuments, in the main constructed 3,700-3,100 years ago in the Late Archaic period. The complex includes large mounds and associated borrow/quarry areas, six semi-elliptical earthen ridges with an outer diameter of 1.14 km and a large flat plaza bordered by the ridges. Mound A, one of the largest constructed earthen mounds in North America, dominates the site. Collection and archaeological excavations have documented the rich material culture associated with this complex.

The Poverty Point complex is recognised internationally as an important site not just because of its scale, the integration of the earthworks and the extent to which the complex is intact, but crucially because it was built by hunter-fisher-gatherers. The elevated natural topography of the site above the Holocene alluvial lowlands provided a secure place for human settlement in an area otherwise prone to flooding, and influenced the layout of the complex and the placing of the earthworks: it helps to make it clear why the site was selected as the location of the monumental complex. All the singular elements that make up the complex as they survive in shape and substance – the mounds, the system of ridges and swales, the aisles, the plaza with the posthole circles, the causeway, the bisector ridge, the dock and the borrow areas – as well as their spatial organisation in relation to the topography, illustrate the refined use of natural features and topography to create a designed monumental landscape.

The extensive earth rearrangements beneath the above-ground structures attest to the extensive earthmoving to combat soil erosion and to achieve the required design. The archaeological deposits concealed below ground represent a repository of potential further information on the property and its builders. The meandering Bayou Maҫon, with its riverine vegetation, and the boggy and wooded areas, provide a sense of the natural environment at the time Poverty Point was constructed.

Criterion (iii): Poverty Point Monumental Earthworks bear exceptional testimony to a vanished cultural tradition, the Poverty Point culture, centred in the Lower Mississippi Valley during the Late Archaic period, 4,000-2,500 years ago. This site, which dates to 3,700-3,100 BP, is an outstanding example of landscape design and monumental earthwork construction by a population of hunter-fisher-gatherers. The mound complex is a singular achievement in earthen construction in North America: it was not surpassed for at least 2,000 years (and only then by people supported by a farming economy). The particular layout of the complex is unique to this site. The natural setting of this inland settlement was an important factor in the site’s establishment and longevity. The location provided easy access to the Mississippi River valley and the hardwood forests along its margins. Although rich in edible resources, the setting lacked stone, a critical raw material for tools and other objects. Thus, an extensive trade network for rocks and minerals from hundreds of kilometres away played a key role in the Poverty Point phenomenon.

The property is well preserved; repair and maintenance works are carried out regularly, especially to counteract soil erosion. The current boundaries of the property correspond to those of the Poverty Point State Historic Site: they include most of the elements that make up this monumental complex and the visual and functional relationship between them. Elements that possibly relate to the cultural and contextual setting of this complex also occur beyond the boundaries of the property; they act as a functional support to Poverty Point's significance. Highway 577 crosses the property from north to south and minimization of its impact will be continued in the long term.

Physical and intangible attributes of the nominated property as they have survived down the millennia, coupled with the extensive information obtained from the archaeological research conducted on the site and with the rich and largely undisturbed buried deposits, bear exceptional and credible witness to the Outstanding Universal Value of the Monumental Earthworks of Poverty Point and to the complex socio-cultural pattern of the societies that built the complex. The tranquil agricultural character of the landscape in the close and wider setting surrounding the property largely contributes to its understanding and enjoyment.

Poverty Point Monumental Earthworks has been owned and managed by the State of Louisiana as a state historic site open to the public since 1972. The management structure has been established under the federal and state legal framework in force, further strengthened by a Station Archaeologist program which ensures that research results be included in the scope of the management. Poverty Point’s archaeological and visual setting and its agricultural character support the Outstanding Universal Value of the property and require appropriate protection and management measures.
News