The site, located in south-east Senegal, includes three geographical areas: the Bassari–Salémata area, the Bedik–Bandafassi area and the Fula–Dindéfello area, each with its specific morphological traits. The Bassari, Fula and Bedik peoples settled from the 11th to the 19th centuries and developed specific cultures and habitats symbiotic with their surrounding natural environment. The Bassari landscape is marked by terraces and rice paddies, interspersed with villages, hamlets and archaeological sites. The Bedik villages are formed by dense groups of huts with steep thatched roofs. Their inhabitants’ cultural expressions are characterized by original traits of agro-pastoral, social, ritual and spiritual practices, which represent an original response to environmental constraints and human pressures. The site is a well-preserved multicultural landscape housing original and still vibrant local cultures. 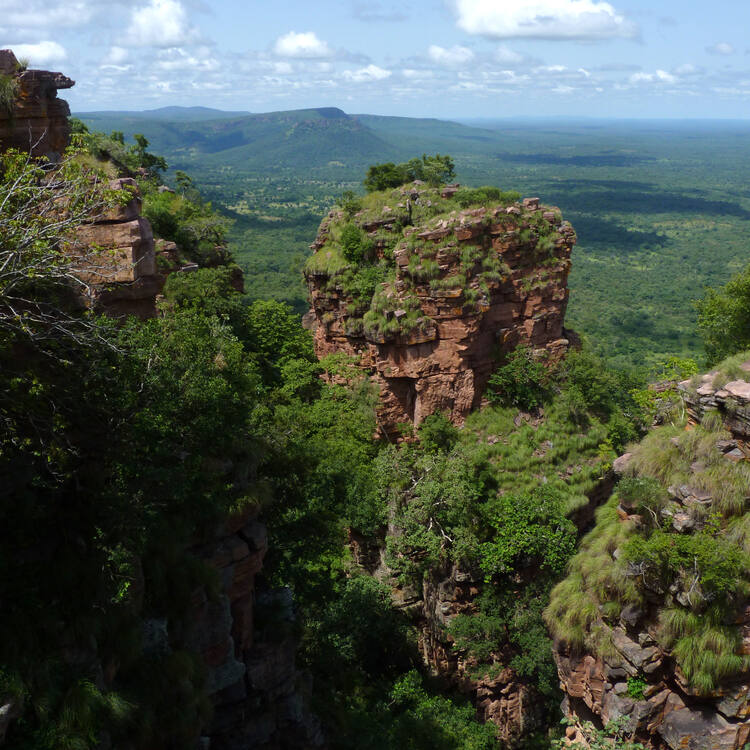 The cultural landscape of Bassari is located in south-eastern Senegal, close to the Mali and Guinean borders, in a hilly territory, formed by the northern foothills of the Fouta Djallon Massif. Two distinct geographic environments feature the region: the alluvial plain and the peneplain to the north and the mountains to the south. The former exhibit a mosaic of cultivated patches, pastures, bushes, the latter, relatively high and sheer, are dotted with several natural caves and have offered an environment particularly advantageous for the establishment of different cultural clusters and their defence. Archaeological evidences of early human occupation abound in the area. The property comprises three different geo-cultural areas: the Bassari – Salémata, the Bedik – Bandafassi and the Fula – Dindéfello areas, each exhibiting specific morphological and cultural traits. In this barely accessible region, but rich in natural resources and biodiversity, the Bassari, Fula and Bedik peoples settled and developed specific cultures, symbiotic with the surrounding natural environment. Until the last century, inhabited villages were grouped and located on rises, so as to control the plains, and consisted of round thatched huts congregated around a central space. Today dispersion and impermanence are the main traits of the Bassari settlements, the populations choosing to live close to the fields. Ancient villages are nowadays used only periodically for ritual ceremonies or festivals.

The property and its associated cultural expressions bear outstanding witness to the cultural specificity and interaction between the Bassari/Beliyan, Bedik, and Fula people in agro-pastoral, social, ritual and spiritual practices, and represent an outstanding, original response to natural environmental constraints and anthropic pressures, so as to use wisely the limited resources of the area.

Criterion (iii): The physical layout of the Bassari Cultural landscape bears an exceptional witness to the complex interactions among environmental factors, land-use practices, social rules, beliefs that altogether have concurred to shape a peculiar and remarkably preserved cultural landscape that outstandingly reflects the ability of make a respectful and sustainable use of the resources of the region.

Criterion (v): The Bassari cultural landscape bears witness to peculiar uses of the land, including crop rotation and manuring, communal sowing, weeding and harvesting and commuting practices imposed by traditional agricultural systems and by the relative scarcity of resources, thus representing an outstanding example of human interaction with a vulnerable environment.

Criterion (vi): The Pays Bassari as well as the sacred dimension that Bassari, Fula and Bedik people attach to it bear exceptional, tangible witness to the intertwined complex of practices, social rules, rites and beliefs that have helped the Bassari regulate the interaction between men and their living environment and have produced a cultural landscape shaped by and imbued with cultural traditions and spiritual meanings that persist in a lively dynamic of transmission.

The serial property includes all elements necessary to make manifest its proposed Outstanding Universal Value. Each area contributes to make evident and to reinforce the value of the whole system and the profound cultural connections between humans and nature. Their individual and overall sizes are also convenient to represent adequately the cultural features and processes conveying the Outstanding Universal Value of the property. In the long term, the sustenance of the integrity of the property needs that measures be set up to safeguard the Bassari culture from the disrupting impact of an excessive exposure to alien cultural models.

The landscapes and their land-use and settlement pattern, along with the traditional architecture, the sacred forests, and the sanctuaries bear credible witness to a complex socio-economic cultural system in which peculiar agricultural and social practices, rituals, beliefs and traditional education have contributed to make possible and durable the human settlement through the respectful and sustainable use of the scarce resources of the region.

The Bassari cultural landscape is covered by specific layers of formal protection according to the law in force. Forms of traditional protection and management continue to be implemented, complemented by the action of several national and local institutional bodies and NGOs. Overall the combination of legal, institutional and traditional protective measures is adequate to ensure the safeguard of the Outstanding Universal Value of the property. However its sustenance in the long term requires a strong coordination among all authorities, organisations and communities responsible at different levels for the protection and management of the Bassari region within a comprehensive management strategy that need to integrate all plans, measures and projects into one management system/plan. The joint management authority must be confirmed in its structures as well as in its means. Specific attention must also be paid to the control of economic development projects in the region, tourism within the property and potential mining or forestry projects in buffer zones. A strategy for the conservation of the property and its attributes must be attached to the Management Plan.