The List Petroglyphic Complexes of the Mongolian Altai
Print

The numerous rock carvings and funerary monuments found in these three sites illustrate the development of culture in Mongolia over a period of 12,000 years. The earliest images reflect a time (11,000 - 6,000 BC) when the area was partly forested and the valley provided a habitat for hunters of large game. Later images show the transition to herding as the dominant way of life. The most recent images show the transition to a horse-dependent nomadic lifestyle during the early 1st millennium BC, the Scythian period and the later Turkic period (7th and 8th centuries AD). The carvings contribute valuably to our understanding of pre-historic communities in northern Asia. 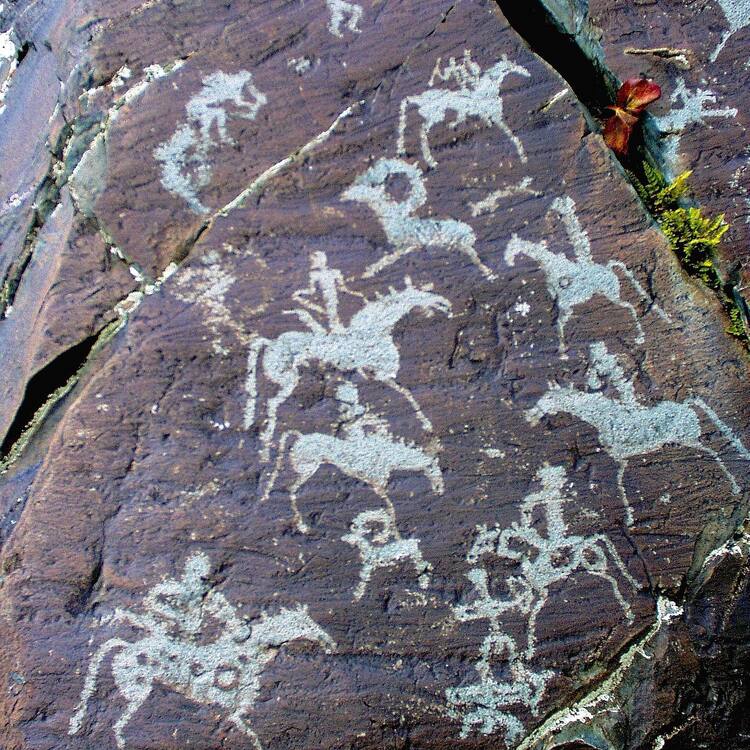 The Petroglyphic Complexes of the Mongolian Altai include three rock art sites in Bayan-Ulgii aimag: Tsagaan Salaa-Baga Oigor of Ulaankhus soum, and Upper Tsagaan Gol (Shiveet Khairkhan) and Aral Tolgoi, both of Tsengel soum. All three are located in high mountain valleys carved out by Pleistocene glaciers. These three property components include large concentrations of petroglyphs and funerary and ritual monuments reflecting the development of human culture over a period of 12,000 years. The persistent relationships between rock art, surface monuments and the larger physical context of rivers, ridges and cardinal directions create a vivid sense of the integration of human communities with the land they inhabited.

The earliest images reflect a period beginning in the Late Pleistocene and lasting through the Early Holocene (ca. 11,000 – 6,000 years BP), when the paleoenvironment shifted from dry to forested steppe and the valleys provided an ideal habitat for hunters of large wild game. Later images from the middle Holocene (ca. 6,000 – 4,000 years BP) reflect the gradual reassertion of steppe vegetation in this part of the the Altai and the early emergence of herding as the economic basis of communities. Imagery from the succeeding, Late Holocene Period, reflects the transition to horse-dependent nomadism during the Early Nomadic and Scythian periods (1st millennium BCE) and the subsequent spread of steppe empires in the later Turkic Period (7th-9th c. CE).

The Petroglyphic Complexes of the Mongolian Altai represent the most complete and best preserved visual record of human prehistory and early history of a region at the intersection of Central and North Asia.

Criterion (iii): The Petroglyphic Complexes of the Mongolian Altai Mountain provide an exceptional documentation of the pre-historic and early historic communities in the northwestern Altai Mountains, at the intersection of Central and North Asia. The petroglyphic imagery includes animals such as mammoths, rhinoceros, and ostriches, executed in static profile contours. These animals inhabited North Asia when the region was significantly colder, drier and covered by rough grasses and forbs rather than forests. By the end of the Late Pleistocene (ca. 11,000 BP), the dry steppe was gradually being replaced by the forested environment of the Early Holocene (ca. 11,000 – 6,000 BP). This period is reflected in majestic images of elk, aurochs, and ibex, executed in profile silhouettes. There are very few sites in North Asia that include pre-Bronze Age petroglyphs in such number, variety, and quality.

The two largest sites, Tsagaan Salaa-Baga Oigor and Upper Tsagaan Gol, include a unique array of material relating to the Bronze and Iron Ages. Together with Aral Tolgoi, the three sites include an undiminished record of human culture in this region over a period of more than 12,000 years. To preserve the integrity of the property, the potential impact of humans and their grazing animals on the petroglyphs requires strict control.

The authenticity of the property is demonstrated by its physical condition, which aside from the wear of time and the elements is essentially pristine. There is some modern damage on rock surfaces (writing, graffiti) located close to roads; but, in general, the rock art and monuments are relatively unimpacted by human or animal activities. The authenticity of the sites is protected by their relative inaccessibility due to both terrain and weather.

The three sites of Tsagaan Salaa-Baga Oigor, Upper Tsagaan Gol, and Aral Tolgoi are registered as historical and cultural properties under state protection since 2008 following the provisions of the 2001 Law on Protecting the Cultural Heritage of Mongolia. The whole of Aral Tolgoi and part of the Upper Tsagaan Gol Complex are also included within the Altai Tavan Bogd National Park, listed since 1994 under the Mongolian Law for Special Protected Areas; this law offers additional protection to the natural environment including water sources and restricts urban and rural development. Ideally this environmental protection should be granted to all three property components. The Mongolian Parliament in 2012 considers amendments to the Law on Protecting the Cultural Heritage of Mongolia in order to include specific articles concerning management of cultural and natural heritage inscribed on the World Heritage List and the National Tentative List; once these additional articles have been adopted, the protection for the property will be further strengthened.

The traditional protection by local inhabitants of this region is a key factor in the management of the Petroglyphic Complexes of the Mongolian Altai. Herders who have already been engaged in heritage protection in some soum (departments), need to be engaged as crucial partners for sustainable management. In this context, the role of the national authorities is important in the provision of incentives for traditional community management as well as for supporting strict control with regard to development proposals for purposes such as mining, road works or tourism infrastructure. This control must apply not only in the nominated areas but also in their upstream hinterland, where development could have detrimental effects to the Outstanding Universal Value of the property. Local and national management approaches could be more effectively integrated through a local site manager; who could ensure regular communication and exchange between the two levels. Management could also be better targeted if based on the results of a comprehensive survey and inventory of the petroglyphs in all three components of the property for their continued protection.