The 74,000-hectare property, inscribed as a mixed natural and cultural site, is situated in southern Jordan, near the border with Saudi Arabia. It features a varied desert landscape consisting of a range of narrow gorges, natural arches, towering cliffs, ramps, massive landslides and caverns. Petroglyphs, inscriptions and archaeological remains in the site testify to 12,000 years of human occupation and interaction with the natural environment. The combination of 25,000 rock carvings with 20,000 inscriptions trace the evolution of human thought and the early development of the alphabet. The site illustrates the evolution of pastoral, agricultural and urban activity in the region. 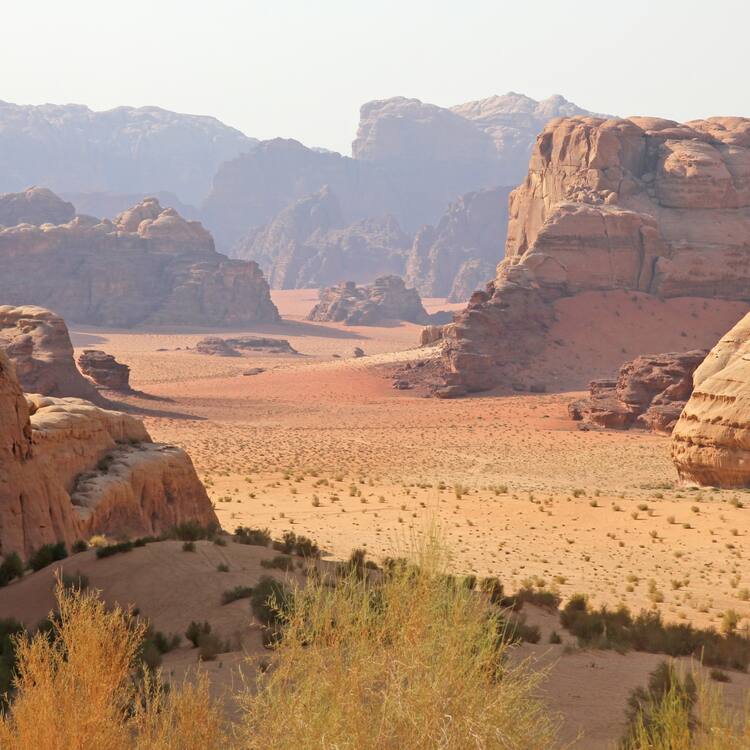 Wadi Rum Protected Area (WRPA) is located in the southern part of Jordan, east of the Rift Valley and south of the steep escarpment of the central Jordanian plateau. It comprises an area of 74,200 hectares. WRPA’s natural values include desert landforms developed within continental sandstones. These landforms have been developed under the influence of a combination of various controlling factors, such as lithology, tectonic activities (including rapid uplift, numerous faults and joints) and surface processes (including various types of weathering and erosion associated with desert climate as well as humid climates in the past), representing million years of ongoing landscape evolution.

Widespread petroglyphs, inscriptions and archaeological remains testify to 12,000 years of human occupation and interaction with the natural environment, illustrating the evolution of pastoral, agricultural and urban human activity in the Arabian Peninsula and the environmental history of the region.

Criterion (iii): The rock art, inscriptions and archaeological evidence in WRPA can be considered an exceptional testimony of the cultural traditions of its early inhabitants. The combination of 25,000 petroglyphs, 20,000 inscriptions, and 154 archaeological sites provides evidence to continuity of habitation and land-use over a period of at least 12,000 years. The petroglyphs, representing human and animal figures, are engraved on boulders, stones, and cliff faces. They provide evidence of long-term patterns of pastoral, agricultural and urban human activity in the property. Engravings indicate an elaborate sense of aesthetics in a pictorial culture, and the archaeological findings span all eras from the Neolithic to the Nabataean. Thamudic, Nabataean and numerous Arabic inscriptions in four different scripts testify to the widespread literacy among its pastoral societies.

Criterion (v): The variety of landforms at WRPA has played an essential role in fostering human settlement. The rock art, inscriptions and water catchment systems document the settlements of successive communities, which developed in areas of mobile animal husbandry and agriculture and form part of a wider context of human interaction with the semi-arid eastern desert environment of the Arabian Peninsula. WRPA assists the understanding of the continuum of settled and mobile lifestyles in a desert landscape illustrating the adaptability and ingenuity of human communities who have made the most of scarce resources to sustain continuous presence after the climate became dryer in the Bronze Age (3rd millennium BC).

Criterion (vii): WRPA is recognised globally as an iconic desert landscape, renowned for its spectacular series of sandstone mountains and valleys, natural arches, and the range of narrow gorges, towering cliffs, massive landslides, and dramatic cavernous weathering forms displayed. Key attributes of the aesthetic values of the property include the diversity and sheer size of its landforms, together with the mosaic of colours, vistas into both narrow canyons and very large wadis, and the scale of the cliffs. The property displays, in a protected setting, an exceptional combination of landforms resulting from drainage incision, severe weathering by salt, biological and other processes, and the undermining of steep sandstone cliffs by these weathering processes, together with the world’s most spectacular networks of honeycomb weathering features. Its associations with the writings of T.E. Lawrence, stressed strongly in the nomination, have ensured a high profile for the property and have reinforced its reputation of the area as a classic desert landscape both globally and within the Arab States.

Since the identification of Wadi Rum as a potential nature reserve in 1978 the various landforms and cultural resources have been managed in a shared framework, which prevented extensive development impacts and maintained the landscape character of the property. The buffer zone of Rum Village contains significant cultural property values and the cultural landscape character of the property reaches even beyond the mostly 5 kilometers perimeter of the buffer zone.

The rock art remains in its original setting, largely unaltered except for the effects of weathering, which has led to its fading as result of rain and wind erosion, leaving some petroglyphs hard to distinguish. In addition modern graffiti has a negative impact on several of the original drawings and inscriptions. However, the fact that so many petroglyphs and inscriptions have been documented means that their ability to convey the cultural traditions of the people who made them continues and that they qualify as an important resource for research.

WRPA was established in 1997 following cabinet decision no. 27/11/3226 (1997) and extended in 2002, following decision 224/11/1/986 (2002). It is further recognized as an archaeological site under the Law of the Department of Antiquities no. 21 (1988) and constitutes a Special Regulation Area under the Administration of the Aqaba Special Economic Zone. In addition to the existing protection for the property, special consideration may need to be given to archaeological artefacts to prevent their removal from the property.

A number of threats that have been identified require careful attention. In this context priority should be given to the impacts of visitor pressure, in particular car tracks and tourism infrastructure, but also the potential encroachment of the village of Rum, groundwater exploitation and firewood collection by local people.  The wider tourism and planning policies for the property, its buffer zone and wider setting also should prioritise the protection of its Outstanding Universal Value.