The site encompasses a rugged and extensively forested mountainous region in the south-east of Jamaica, which provided refuge first for the indigenous Tainos fleeing slavery and then for Maroons (former enslaved peoples). They resisted the European colonial system in this isolated region by establishing a network of trails, hiding places and settlements, which form the Nanny Town Heritage Route. The forests offered the Maroons everything they needed for their survival. They developed strong spiritual connections with the mountains, still manifest through the intangible cultural legacy of, for example, religious rites, traditional medicine and dances. The site is also a biodiversity hotspot for the Caribbean Islands with a high proportion of endemic plant species, especially lichens, mosses and certain flowering plants. 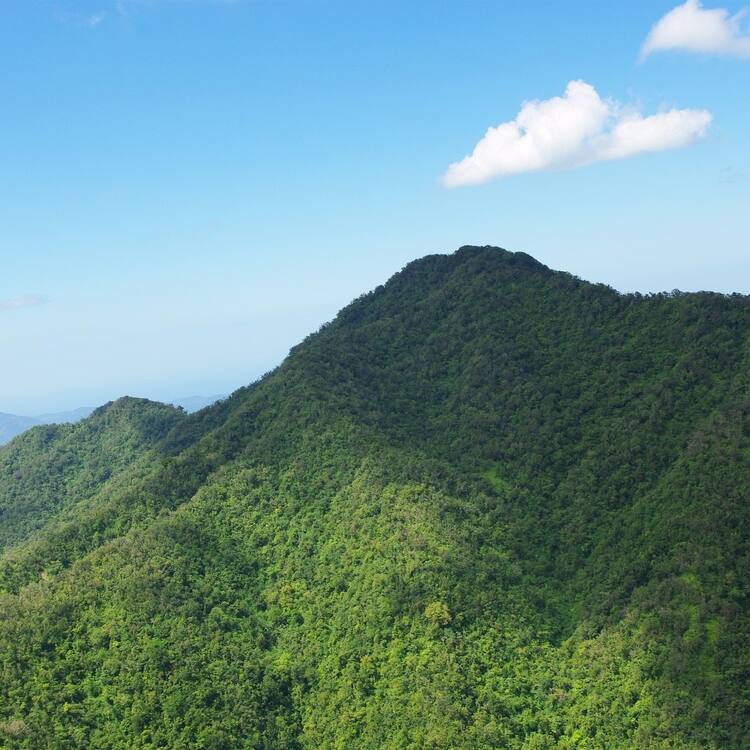 The cultural and natural heritage of the Blue and John Crow Mountains comprises 26,252 ha of tropical, montane rainforest within the larger Blue Mountain and John Crow Mountain ranges, located in the eastern part of Jamaica in the Caribbean. These two ranges cover approximately 20% of the island’s total landmass and are recognised for their biodiversity significance within the Caribbean Region. The property spans elevations from 850m to 2,256m asl and is surrounded by a buffer zone of some 28,494 ha. The high elevation, rugged landscape and the north and south-facing slopes of the mountains of the property have resulted in a wide variety of habitat types with nine ecological communities within the upper montane forest of the Blue Mountains (over 1,000m) and John Crow Mountains (over 600m). These include a unique Mor Ridge Forest characterised by a deep layer of acidic humus with bromeliads and endangered tree species. Above 1,800m, the vegetation of the Blue Mountains is more stunted with some species restricted to these altitudes. Above 2,000m the forest is known as Elfin Forest due to the stunted and gnarled appearance of the trees which are heavily coated with epiphytes including hanging mosses, ferns and tiny orchids.

The Blue and John Crow Mountains property lies within the Jamaican Moist Forests Global 200 priority eco-region, and is part of one of the 78 most irreplaceable protected areas for the conservation of the world’s amphibian, bird and mammal species. Furthermore it coincides with a Centre of Plant Diversity; an Endemic Bird Area and contains two of Jamaica’s five Alliance for Zero Extinction sites. There is an exceptionally high proportion of endemic plant and animal species found in the property, Jamaica having evolved separately from other landmasses. In addition, the property hosts a number of globally endangered species, including several frog and bird species.

The Blue and John Crow Mountains property offered refuge to Maroons (former enslaved peoples) and therefore preserves the tangible cultural heritage associated with the Maroon story. This includes settlements, trails, viewpoints, hiding places, etc. that form the Nanny Town Heritage Route. The forests and their rich natural resources provided everything the Maroons needed to survive, to fight for their freedom, and to nurture their culture. Maroon communities still hold strong spiritual associations with these mountains, expressed through exceptional intangible manifestations.

Criterion (iii): The Blue and John Crow Mountains in combination with its cultural heritage, materialised by the Nanny Town Heritage Route and associated remains, i.e. secret trails, settlements, archaeological remains, look-outs, hiding places etc., bear exceptional witness to the phenomenon of grand marronage as characterized by Windward Maroon culture which, in the search for freedom from colonial enslavement, developed a profound knowledge of, and attachment to, their environment, that sustained and helped them to achieve autonomy and recognition.

Criterion (vi): Blue and John Crow Mountains is directly associated with events that led to the liberation, and continuing freedom and survival, of groups of fugitive enslaved Africans that found their refuge in the Blue and John Crow Mountains. The property conveys outstandingly its association with living traditions, ideas and beliefs that have ensured that survival, and the specificity and uniqueness of which was recognised by UNESCO in 2008 through its inscription in the Representative List of Intangible Heritage.

Criterion (x): The Blue and John Crow Mountains belongs to the Caribbean Islands biodiversity hotspot and is an important centre for plant endemism in the Caribbean displaying 50% endemicity in the flowering plants at elevations above 900-1000 m asl with between 30-40 % of these species found only within the property’s boundaries. One of two Centres of Plant Diversity in Jamaica, the property includes a reported 1,357 species of flowering plant of which approximately 294 are Jamaican endemics and 87 of these species are found only within the property. 61 species of liverwort and moss occur in the property as well as 11 species of lichen, all of which are endemic. Genera which are well represented in the endemic flora of the property include Pilea (12 spp); Lepanthes (12 spp); Psychotria (12 spp) and Eugenia (11 spp).

The Blue and John Crow Mountains overlaps with one of the world’s most irreplaceable protected areas, based on its importance for amphibian, bird and mammal species. The property hosts globally significant populations of bird species and represents a key part of the Jamaican Endemic Bird Area. It is important for a number of restricted-range species as well as a large number of migratory birds such as the Petchary (Tyrannus domenciensis) Bicknell’s Thrush (Catharus bicknellii) and Swainson’s Warbler (Limnothlypis swainsonii). The property contains two of Jamaica’s five Alliance for Zero Extinction sites, hosting a significant number of globally endangered species, including the critically endangered plant species Podocarpus urbanii, Eugenia kellyana and Psychotria danceri. The property is also home to several endangered frog and bird species including the critically endangered Arntully Robber Frog, Eleutherodactylus orcutti and the Jamaican Peak Frog, E. alticola. Threatened bird species include Bicknell's Thrush C. bicknellii, the Jamaican Blackbird, Nesopsar nigerrimus, as well as the Yellow-billed Parrot, Amazona collaria and Black-billed Parrot, Amazona agilis.  The only terrestrial non-flying mammal species found in the property is the threatened rodent Hutia, Geocapromys brownii with a population restricted to John Crow Mountains.

The Blue and John Crow Mountains protects the most intact forests within the upper elevations of the Blue and John Crow Mountains. The more disturbed lower elevation areas are contained within the surrounding buffer zone. The property is legally well protected as it falls within the boundaries of the larger Blue and John Crow Mountains National Park and is aligned with the park’s Preservation Zone, providing the strictest levels of protection within the zoning system. The area is rugged, remote with limited access thereby providing additional security against some threats. The boundaries of the property are well designed to include the key attributes of its biodiversity values. Nevertheless there are a range of current and potential threats to the property, including from invasive alien species, encroachment, mining, fire and climate change. The majority of threats emanate from the interface between the higher elevation property and lowlands within the buffer zone.

The Blue and John Crow Mountains encompass the core cultural properties, sites and vestiges that support their significance as the refuge of the Windward Maroons. Their physical fabric is in a fair condition. The relationships and dynamic functions present in the landscape and the living properties essential to its distinctive character are maintained but require strengthening. The effective protection of the buffer zone is essential in order to sustain the integrity of the property.

The cultural heritage of the Blue and John Crow Mountains related to the story of the Windward Maroons exhibits a high degree of authenticity in terms of location and setting. The rugged topography and the impenetrable vegetation convey the function as refuge played by the area. Continuity of names of specific places and stories associated with them contribute to sustaining their authenticity. However, the most important aspect of authenticity for this cultural heritage is the meaning and significance attributed by Maroons to their heritage, and the strength and depth of linkages established by them to it. The mountains are also home to Maroon ancestors' spirits and therefore provide a link for Maroons to their past and preceding generations.

The property enjoys good levels of legal protection as it lies within the Blue and John Crow Mountains National Park. As such it is protected by a suite of legislation including the Natural Resources (National Park) Act (1993) and its regulations; the Forestry Act (1996); the Natural Resources Conservation Authority Act (1991) and the Protected National Heritage under Jamaica National Heritage Trust Act (1985). The property is also covered by a well-structured 5 year management plan.

The Blue and John Crow Mountains is subject to a complex governance regime that ensures broader engagement but should strive for continually improved inter-organisational coordination and cooperation. The management of the property recognises the complex interplay between its natural and cultural values and the Maroon local communities are positively engaged with the site and its management. The integration in protection and management activities of Maroon community members helps sustain their links with their heritage and supports the state agencies in achieving their mandates for the safeguarding of the property. Protection of the natural values of the property is also dependent to large extent on the sympathetic management of the lower elevation buffer zone which has been subject to a history of deforestation, agricultural landuse and encroachment. Active and sustained management of the edge effects from surrounding lands will be critical to ensure issues such as buffer zone planning, development and land use do not impact on the property. It will be important to manage the potential impacts of invasive alien species, fire and encroachment from both small scale shifting agriculture and commercial coffee growing. Vigilance will be needed to ensure that mining exploration and/or operations are not permitted to overlap with the property, and legislation and policy should be tightened to protect the World Heritage site in perpetuity from mining, in line with the established position of the World Heritage Committee and leading industry bodies. Monitoring of climate change impact on the elevation sensitive ecology of the property will be important to ensure proactive planning and management of this threat.

Adequate and increased capacity of staff and funding will be needed to manage the property in the face of the threats outlined above. Sustainable funding will be necessary in particular to strengthen management of the buffer zone and effectively address issues such as planning for sustainable development, support for livelihoods and enhanced community engagement. Stringent monitoring of activities carried out within the property and its buffer zone is also fundamental.
Activities (1)