Most of this archaeological site, which started as a Roman military camp and grew to become a town from the 5th century, has not been excavated. It contains remains from the Roman, Byzantine and Early Muslim periods (end of 3rd to 9th centuries AD) and a fortified Roman military camp. The site also has 16 churches, some with well-preserved mosaic floors. Particularly noteworthy is the mosaic floor of the Church of Saint Stephen with its representation of towns in the region. Two square towers are probably the only remains of the practice, well known in this part of the world, of the stylites (ascetic monks who spent time in isolation atop a column or tower). Um er-Rasas is surrounded by, and dotted with, remains of ancient agricultural cultivation in an arid area. 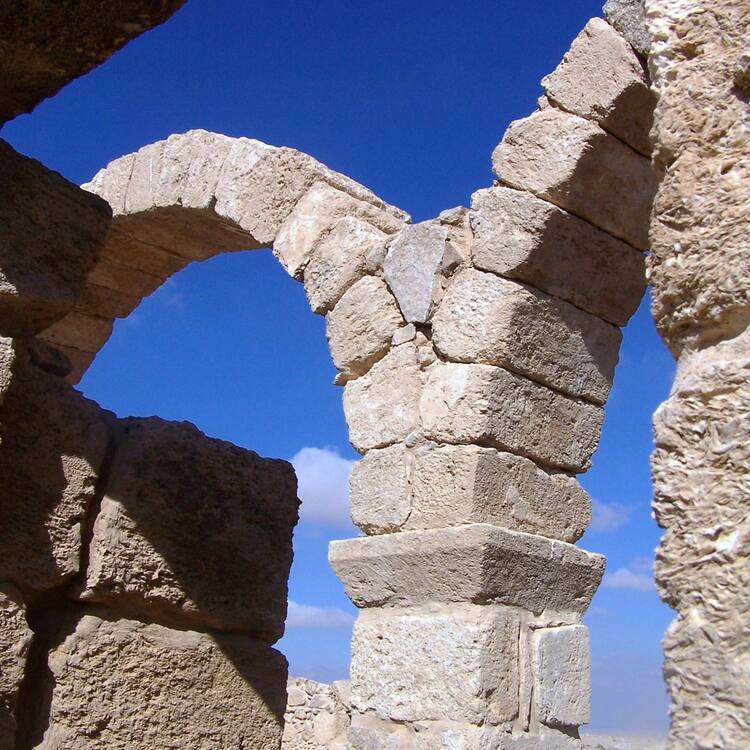 Located south-east of Madaba on the edge of the semi-arid steppe, this archaeological site, which started as a Roman military camp and grew to become a town from the 5th century, is largely unexcavated. It comprises remains from the Roman, Byzantine and Early Muslim periods (end of 3rd to 9th centuries AD) including a fortified Roman military camp and sixteen churches, some with well-preserved mosaic floors. Particularly noteworthy is the mosaic floor of the Church of St Stephen with its representation of towns in the region. A tall square tower and associated buildings are probably the only remains of the practice, well known in this part of the world, of the stylites (ascetic monks who spent time in isolation atop a column or tower). Um er-Rasas is surrounded by, and dotted, with remains of ancient agricultural cultivation, including terracing, water channels and cisterns.

The Outstanding Universal Value of the site resides in the extensive settlement of the Byzantine/Umayyad period. These remains occupy the interior of the former Roman fort and also extend outside its walls to the north. They include the churches whose mosaic floors are of great artistic value. Further to the north, in a separate group of ruins associated with quarries and cisterns, is the uniquely complete tower accommodation of the stylite monks.

The lifestyle of the stylite monks is conveyed by a 14 meter high stone tower built in the centre of a courtyard adjoined by a small church (the Church of the Tower). A room at the top of the tower, accessible from a door on the south apparently reached by a removable ladder was the monk's living quarters.

The archaeology and inscriptions show evidence that monastic Christianity was tolerated and continued during the Islamic period of the 7th and 8th centuries and testify to the spread of monotheistic beliefs in the region.

Criterion (i): Um er-Rasas is a masterpiece of human creative genius given the artistic and technical qualities of the mosaic floor of St Stephen's church.

Criterion (vi): Um er-Rasas is strongly associated with monasticism and with the spread of monotheism in the whole region, including Islam.

The identified remains of the Byzantine/Umayyad settlement are included within two separate core areas encompassed and linked by the buffer zone. The integrity of these is retained. The standing remains and excavated buildings remain intact as part of an archaeological site containing many ruined structures. Parts of the site are dangerous due to structural collapse in past earthquakes and open trenches. The ruins have been subject in the past to unauthorised investigation and excavation.

The limestone structures, some bearing remnants of painted plaster, and the excavated mosaic floors are vulnerable to general weathering processes and poor drainage. Remedies for this have involved consolidation/reconstruction of standing structures, backfilling of some excavations and the construction of protective shelters over St Stephen's Church and part of the Church of the Lions.

The property is vulnerable to increased and unregulated tourism. Its setting has potential vulnerability from possible future development of the surrounding area, which is at present pastoral and sparsely settled.

The form, design and materials, location and setting of the ruined and excavated structures continue to express the Outstanding Universal Value of the property. Their authenticity has, to a degree, been impaired by the use of incorrect repair and maintenance techniques in consolidation work and in the protection of mosaic floors.

The setting is vulnerable to tourism and local community requirements. Access routes within the site, parking areas, visitors' facilities and pathways all require careful design and management, as do any further excavation and stabilization projects that require shelters.

The property is protected by the Antiquities Law administered by the Department of Antiquities (DOA) under the Ministry of Tourism and Antiquities. The site manager and his assistants, an architect and archaeologist from the DOA are permanently present at the site. Five security guards from the local community deal with security issues and the safety of workers and visitors.

A Management Plan (including a comprehensive conservation plan) has been developed by a working group involving representatives from both the DOA and the Ministry. Expert committees involving staff from the DOA, other government agencies and the universities have studied particular issues and contributed to the process, which has been reviewed following recommendations by joint World Heritage Centre/ICOMOS missions in 2005 and 2006. It will incorporate guidelines and practice standards for maintenance and repair, conservation and archaeological research, together with a monitoring and maintenance programme. Once adopted, it will be implemented by the site manager and trained staff at the site.

Funding has been provided by the European Commission for a site conservation and presentation strategy for Um er-Rasas as part of a wider programme 'Protection and Promotion of Cultural Heritage in the Hashemite Kingdom of Jordan', aimed at raising the quality of research, restoration and site management, visitor facilities and information. The works will be completed in accordance with revisions agreed with the World Heritage Centre including the visitors' centre, security fencing around the whole site, visitors' pathways and a new shelter over St Stephen's Church.

More land has been acquired by the DOA around the southern part of the property containing St.Stephen's and other churches and also between that and the northern part containing the stylite tower and associated structures, enabling greater protection of the site. The DOA has negotiated with the municipality of Um er- Rasas to apply specific regulations to lands adjacent to the DOA-owned land so as to anticipate and mitigate any negative impacts of future land use change. A revision to the boundaries of the World Heritage Property could be considered in the light of the greater extent of land now owned by the DOA.

The partnership established between the DOA and the local community will continue to involve the community in the protection of the property and enable them to benefit from tourism.