The archaeological site of Takht-e Soleyman, in north-western Iran, is situated in a valley set in a volcanic mountain region. The site includes the principal Zoroastrian sanctuary partly rebuilt in the Ilkhanid (Mongol) period (13th century) as well as a temple of the Sasanian period (6th and 7th centuries) dedicated to Anahita. The site has important symbolic significance. The designs of the fire temple, the palace and the general layout have strongly influenced the development of Islamic architecture. 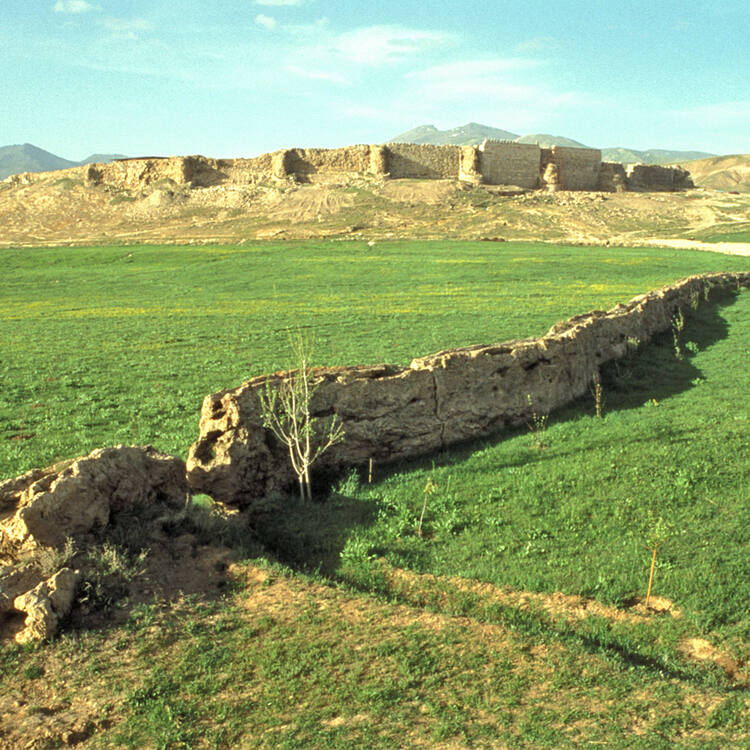 The archaeological ensemble called Takht-e Soleyman (“Throne of Solomon”) is situated on a remote plain surrounded by mountains in northwestern Iran’s West Azerbaijan province. The site has strong symbolic and spiritual significance related to fire and water – the principal reason for its occupation from ancient times – and stands as an exceptional testimony of the continuation of a cult related to fire and water over a period of some 2,500 years. Located here, in a harmonious composition inspired by its natural setting, are the remains of an exceptional ensemble of royal architecture of Persia’s Sasanian dynasty (3rd to 7th centuries). Integrated with the palatial architecture is an outstanding example of Zoroastrian sanctuary; this composition at Takht-e Soleyman can be considered an important prototype.

An artesian lake and a volcano are essential elements of Takht-e Soleyman. At the site’s heart is a fortified oval platform rising about 60 metres above the surrounding plain and measuring about 350 m by 550 m. On this platform are an artesian lake, a Zoroastrian fire temple, a temple dedicated to Anahita (the divinity of the waters), and a Sasanian royal sanctuary. This site was destroyed at the end of the Sasanian era, but was revived and partly rebuilt in the 13th century. About three kilometres west is an ancient volcano, Zendan-e Soleyman, which rises about 100 m above its surroundings. At its summit are the remains of shrines and temples dating from the first millennium BC.

Takht-e Soleyman was the principal sanctuary and foremost site of Zoroastrianism, the Sasanian state religion. This early monotheistic faith has had an important influence on Islam and Christianity; likewise, the designs of the fire temple and the royal palace, and the site’s general layout, had a strong influence on the development of religious architecture in the Islamic period, and became a major architectural reference for other cultures in both the East and the West. The site also has many important symbolic relationships, being associated with beliefs much older than Zoroastrianism as well as with significant biblical figures and legends.

The 10-ha property also includes Tepe Majid, an archaeological mound culturally related to Zendan-e Soleyman; the mountain to the east of Takht-e Soleyman that served as quarry for the site; and Belqeis Mountain 7.5 km to the northeast, on which are the remains of a Sasanian-era citadel. The archaeological heritage of the Takht-e Soleyman ensemble is further enriched by the Sasanian town (which has not yet been excavated) located in the 7,438-ha landscape buffer zones.

Criterion (i):Takht-e Soleyman is an outstanding ensemble of royal architecture, joining the principal architectural elements created by the Sasanians in a harmonious composition inspired by their natural context.

Criterion (ii):The composition and the architectural elements created by the Sasanians at Takht-e Soleyman have had strong influence not only in the development of religious architecture in the Islamic period, but also in other cultures.

Criterion (iii):The ensemble of Takht-e Soleyman is an exceptional testimony of the continuation of cult related to fire and water over a period of some two and half millennia. The archaeological heritage of the site is further enriched by the Sasanian town, which is still to be excavated.

Criterion (iv):Takht-e Soleyman represents an outstanding example of Zoroastrian sanctuary, integrated with Sasanian palatial architecture within a composition, which can be seen as a prototype.

Criterion (vi): As the principal Zoroastrian sanctuary, Takht-e Soleyman is the foremost site associated with one of the early monotheistic religions of the world. The site has many important symbolic relationships, being also a testimony of the association of the ancient beliefs, much earlier than the Zoroastrianism, as well as in its association with significant biblical figures and legends.

Within the boundaries of the property are located the known elements and components necessary to express the Outstanding Universal Value of the property, including the lake and the volcano, archaeological remains related to the Zoroastrian sanctuary, and archaeological remains related to the royal architecture of the Sasanian dynasty. Masonry rooftops have collapsed in some areas, but the configurations and functions of the buildings remain evident.

The region’s climate, particularly the long rainy season and extreme temperature variations, as well as seismic action represent the major threats to the integrity of the original stone and masonry materials. Potential risks in the future include development pressures and the construction of visitor facilities in the buffer zones around the sites. Furthermore, there is potential conflict between the interests of the farmers and archaeologists, particularly in the event that excavations are undertaken in the valley fields.

The Takht-e Soleyman archaeological ensemble is authentic in terms of its forms and design, materials and substance, and location and setting, as well as, to a degree, the use and the spirit of the fire temple. Excavated only recently, the archaeological property’s restorations and reconstructions are relatively limited so far: a section of the outer wall near the southern entrance has been rebuilt, using for the most part original stones recovered from the fallen remains; and part of the brick vaults of the palace structures have been rebuilt using modern brick but in the same pattern as the original. As a whole, these interventions can be seen as necessary, and do not compromise the authenticity of the property, which retains its historic ruin aspect. The ancient fire temple still serves pilgrims performing Zoroastrian ceremonies.

Takht-e Soleyman was inscribed on the national heritage list of Iran in 1931, and it is subject to legal protection under the Law on the Protection of National Treasures (1930, updated 1998) and the Law of the Iranian Cultural Heritage Organization Charter (n. 3487-Qaf, 1988). The inscribed World Heritage property, which is owned by the Government of Iran, is under the legal protection and management of the Iranian Cultural Heritage, Handicrafts and Tourism Organization (which is administered and funded by the Government of Iran). Acting on its behalf, Takht-e Soleyman World Heritage Base is responsible for implementation of the archaeology, conservation, tourism, and education programmes, and for site management. These activities are funded by the Iranian Cultural Heritage, Handicrafts and Tourism Organization, as well as by occasional international support. The current management plan, prepared in 2010, organises managerial strategies and activities over a 15-year period.

Sustaining the Outstanding Universal Value of the property over time will require continuing periodic on-site observations to determine whether the climate or other factors will lead to a negative impact on the Outstanding Universal Value, integrity or authenticity of the property; and employing internationally recognised scientific standards and techniques to properly safeguard the monuments when undertaking stabilisation, conservation, or restoration projects intended to address such negative impacts.