The Tugendhat Villa in Brno, designed by the architect Mies van der Rohe, is an outstanding example of the international style in the modern movement in architecture as it developed in Europe in the 1920s. Its particular value lies in the application of innovative spatial and aesthetic concepts that aim to satisfy new lifestyle needs by taking advantage of the opportunities afforded by modern industrial production. 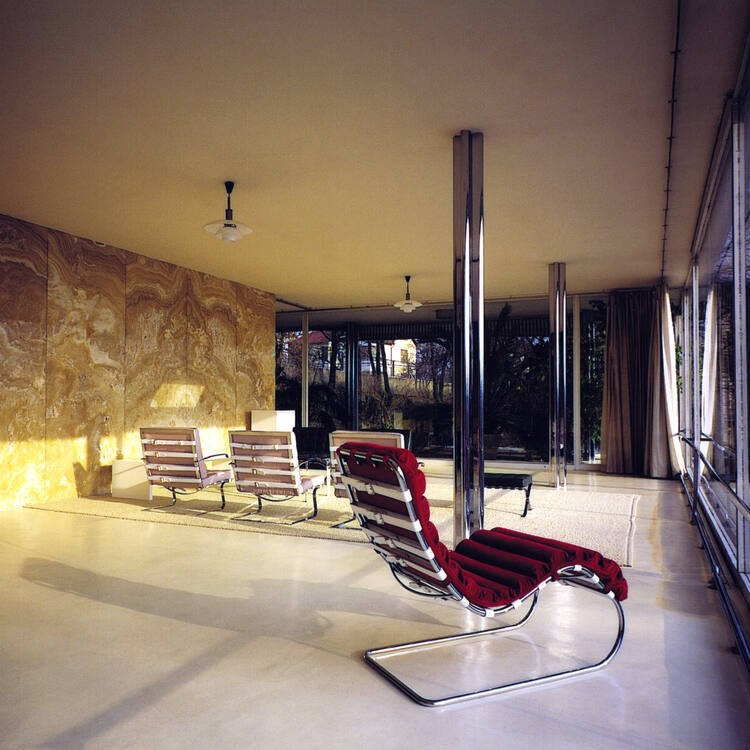 The Tugendhat Villa in Brno is a pioneering work of modern 20th century residential architecture. It embodies innovative spatial and aesthetic concepts that were developed in housing at that time to meet the new needs arising from the modern way of life, by taking advantage of the opportunities afforded by modern industrial production. Designing the interior residential area as a space without limits determines the architecture of the Tugendhat Villa. The villa also reflects the desire of Mies van der Rohe to create an architecture concentrating on the essential and aiming at the purest expression in each detail as well as in the whole. A winter garden occupies almost two-thirds of the entire floor space of the main floor. Subtle divisions made of rosewood and onyx separate spaces of this same floor, such as the reception hall, the music corner and the library. The living area has large windows and is directly joined to the terrace, which has a wide stairway leading down to the garden. The main structure of the house is made of reinforced concrete slabs supported by steel beams, some of them being polished. The basement includes mechanical equipment of the house, in particular for the central heating and air conditioning, as well as for the electrically operated large windows.

The Tugendhat Villa in Brno is one of the most original projects completed by Mies van der Rohe. He was able to fully implement his design in accordance with his intentions due to the ideal cooperation with the highly cultured Tugendhat family. The furniture was designed by the architect and some pieces were intended for specific locations. There is no other similar architectural work of the European production by Mies van der Rohe that has been preserved with such integrity.

Criterion (ii): The German architect Mies van der Rohe applied the radical new concepts of the Modern Movement triumphantly to the Tugendhat Villa to the design of residential buildings.

Criterion (iv): Architecture was revolutionized by the Modern Movement in the 1920s and the work of Mies van der Rohe, epitomized by the Tugendhat Villa, played a major role in its worldwide diffusion and acceptance.

The main components of the property, namely the house and the garden, are still present and are located within the boundaries of the property. The protective zone of the urban heritage reservation serves as the buffer zone of the Tugendhat Villa. The views of the villa and those from the villa of the town have been preserved. All risks of the erection of buildings that could compromise the visual field of the villa are kept under control by the bodies responsible for heritage preservation.

The Tugendhat Villa in Brno meets the criteria of authenticity. In spite of various alterations in the past and the loss of its original function, the present form of the villa, the materials and items of technical equipment of the villa are the same as in the design of the architect. The authenticity is underlined by the fact that the villa serves as a house-museum. The villa was used as a monument of modern architecture. In addition to regular maintenance over the years, the work done between 2010 and 2012 helped to restore its original appearance of 1930, the year when it was finished; this was achieved by the restoration of the finishes, plaster, wood, stone and metal, as well as by the repair of structural elements such as the slabs and the concrete walls. The restoration work has been carried out in accordance with the strict international conservation criteria with the use of period assembly and building techniques. The restoration was based on detailed research that has deepened the knowledge of its original architectural details.

The City of Brno is the owner and administrator of the Tugendhat Villa, and is responsible for the maintenance, protection, and promotion of the property. The villa is open to the public for guided tours. The site also hosts various cultural events. Financial resources for maintenance, conservation and the presentation of the site are allocated from the town budget. In 2006, the Tugendhat Villa Foundation has been established with the aim to support the conservation and the presentation of the property.

The management plan of the property is in place and it is scheduled to be updated regularly. In this document, there are monitored potential risks for the property. Since the inscription of the villa on the World Heritage List, annual monitoring reports have been prepared at the national level to serve the property manager, the Ministry of Culture, the National Heritage Institute and other agencies involved as well.