The Central Suriname Nature Reserve comprises 1.6 million ha of primary tropical forest of west-central Suriname. It protects the upper watershed of the Coppename River and the headwaters of the Lucie, Oost, Zuid, Saramaccz, and Gran Rio rivers and covers a range of topography and ecosystems of notable conservation value due to its pristine state. Its montane and lowland forests contain a high diversity of plant life with more than 5,000 vascular plant species collected to date. The Reserve's animals are typical of the region and include the jaguar, giant armadillo, giant river otter, tapir, sloths, eight species of primates and 400 bird species such as harpy eagle, Guiana cock-of-the-rock, and scarlet macaw. 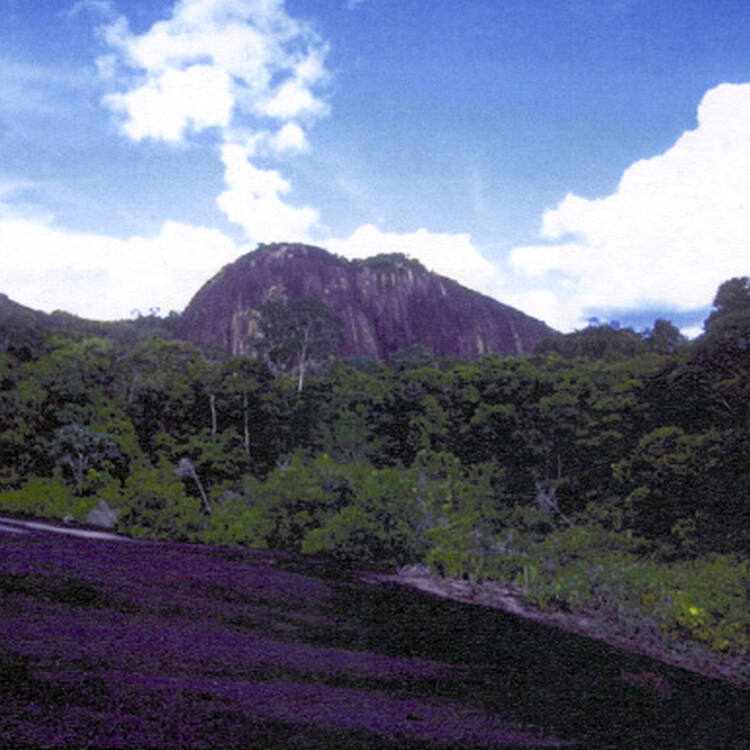 The Central Suriname Nature Reserve was established in 1998 to link up three pre-existing Nature Reserves named Raleighvallen, Eilerts de Haan and Tafelberg. Through the addition of significant areas in the process, the property now forms an immense protected area covering around eleven percent of the national territory. The 1,592,000 hectares are mostly comprised of primary tropical forest in west-central Suriname, a part of the Guiana Shield within the phylogeographic limits of Amazonia. The Reserve protects the upper watershed of the mighty Coppename River, as well as the headwaters of a number of other important rivers, covering a broad range of topography, ecosystems and habitats. Several distinctive geological and physical formations occur in the Central Suriname Nature Reserve, including granite inselbergs that rise up to 360 m.a.s.l. above the surrounding tropical forest. The eastern-most table top mountain or "Tepui" of the Guiana Shield is located in the Reserve and there is the Wilhelmina Mountain Range in the South culminating at Juliana Top, Suriname's highest elevation at 1,230 m.a.s.l.

The property is of notable conservation value due to its large scale and pristine state as an uninhabited and unhunted region. Its montane and lowland forests contain a high diversity of plant life with almost 5,000 vascular plant species collected to date, many of them endemic. There are also areas of swamp forest, savannah and xerophytic vegetation on the granite outcrops. Among the Reserve’s 400 recorded bird species are the charismatic Harpy Eagle, Guiana Cock-of-the-Rock, and Scarlet Macaw and there are viable populations of numerous mammals typical of the region, including Jaguar, Giant Armadillo, Giant River Otter, Lowland Tapir and eight species of primates. Much of the property has yet to be inventoried and the true extent of the area's diversity is not fully known. Pre-Colombian cultural artefacts and petroglyphs have been found near rivers and creeks in different parts of the property, suggesting a potentially significant cultural heritage hidden within the vast and almost inaccessible property.

Criterion (ix): The property encompasses significantly diverse topography and soils. The altitudinal gradient, ranging from 25 m.a.s.l. to Suriname's highest elevation at 1,230 m.a.s.l, spans almost the entire possible range. These conditions have resulted in an extraordinary variety of ecosystems, habitats and ecological niches of global conservation importance. Besides vast tracts of dense tropical lowland forest there are swamp forests, rare rocky savannas, and visually stunning granite inselbergs, all harbouring specialised communities of flora and fauna. To this day, this ecosystem variation has been allowing organisms to move in response to disturbance, adapt to change and maintain gene flow between populations in one of the few remaining areas of vast and undisturbed forests in the wider Amazonian region, practically free of direct human impacts. Viable populations of large top predators indicate a nearly pristine state, rendering the property into an invaluable scientific reference to better understand the natural dynamics of the undisturbed forest ecosystems.

Criterion (x): The site contains a stunning diversity of plant and animal species, many of which are endemic to the Guiana Shield and globally vulnerable, threatened or endangered. Due to its location on the Eastern edge of the Precambrian Guiana Shield the property contains a distinct assemblage of species compared to the rest of the Guiana Shield region. Some 6,000 plant species have been recorded in yet incomplete inventories. Of the 1,890 known species of vertebrates in Suriname, at least 65 are endemic to the country and likely occur within the property. Many of the species are endemic to the property or even small areas within the property, such as the ecologically and geologically remarkable individual granite inselbergs. The large and undisturbed property is of major importance for viable populations of several rare species such as Guianan Cock-of-the-Rock and Giant River Otter. Research expeditions routinely reveal species of fauna and flora previously unknown to science.

While large parts of the Guiana Shield and Amazon regions are rapidly being transformed by logging, hunting, mining and settlement, the Central Suriname Nature Reserve can still be characterized as an intact conservation of a large scale. It remains for the most part inaccessible, unaffected by human activity, keeping its variety of ecosystems and high diversity of plant and animal species with a notable degree of endemism well preserved. The inaccessibility affords the property an effective - if unofficial – "buffer zone" of nearly 100 miles in almost all directions. The ecosystems within the property are intact and sufficiently large to include entire and viable populations and interrelated communities of flora and fauna. The remoteness of the property has thus far protected it, but at the same time has also limited conservation activities there. As development pressures build up around the reserve it is likely that, in future, threats may arise which may affect on-going ecological and biological processes in the evolution and development of terrestrial and freshwater ecosystems and communities of plants and animals.

The protected areas preceding today's property 'were set up in 1960s and later brought together and significantly amended in 1998 when the large, entirely state-owned Central Suriname Nature Reserve was established. The central piece of legislation is Suriname's Nature Protection Act of 1954, prohibiting any activity that will negatively affect the integrity of nature reserves. According to the Act, the Head of the Suriname Forest Service (LBB) is responsible for managing all nature reserves and for handling all matters regarding nature conservation, including law enforcement. The operational management of the property is entrusted to the Nature Conservation Division (NB) of the Suriname Forest Service, which is assisted by the Foundation for Nature Conservation in Suriname (STINASU), a semi-governmental organization focusing on nature-based tourism and research in support of Suriname's governmental protected areas efforts. Management plans covering the entire property are to be produced for five year periods and amended by operational plans. Complementary business plans are desirable in the medium and long term. Although there are no permanent human inhabitants within the property, consultation with local resource-dependent communities in the vicinity are required. According to some observers, nearby Maroon communities, descendents of slaves, and Trio indigenous communities may have been affected by the creation of the Central Suriname Nature Reserve.

One challenge for the remote Central Suriname Nature Reserve is a lack of adequate resources and capacities. This is likely to become more acute in case of the expected scenario of mounting pressure on the property's resources. To develop the necessary capacity and ensure long-term financing, the Government of Suriname has joined forces with international conservation organizations and multilateral agencies. Diversified funding strategies are needed to ensure financing beyond the duration of individual projects. Tourism is in its infancy with some potential for localized interventions near a number of airstrips allowing access but unlikely to significantly contribute to covering management costs. Arguably the most serious long term challenge are the rich mineral and timber resources in and near the property. Several exploratory mining and logging concessions have been granted North, East and West of the property. Prospecting for gold occurs at the Northern tip of the property and major Bauxite deposits have been confirmed in the Bakhuis Mountains to the West of the Reserve. Careful assessment and planning is needed to ensure that future development will be adequately managed to prevent impacts incompatible with World Heritage status. A buffer zone could help balance development and conservation in sensitive areas near the property.