Events Call for nominations for the Ramsar Wetland ...
Print

Call for nominations for the Ramsar Wetland Conservation Awards 2015

The Ramsar Convention Secretariat is pleased to launch a call for nominations for the sixth edition of the Ramsar Wetland Conservation Awards, which will be presented at the 12th meeting of the Conference of the Contracting Parties in Punta del Este, Uruguay, in June 2015.

Three Awards will be given – each with the Evian Special Prize of US$10,000 kindly offered by the DANONE Group – in the following categories:

The Ramsar Secretariat invites all recipients of this message to consider whether they know of suitable individuals, organizations, or initiatives that could be nominated, as well as to disseminate this call widely within their network, so as to attract as many good nominations as possible.

For more information regarding the Criteria and Procedures for the Award, nomination forms, as well as on previous editions of the Awards please consult the attached documents or the Ramsar web site: http://www.ramsar.org/Ramsar-Award/

The deadline for the receipt of nominations is 15 July 2014. 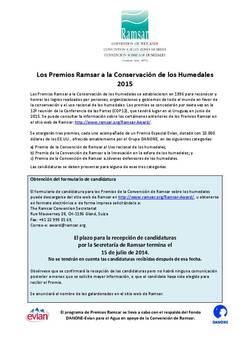 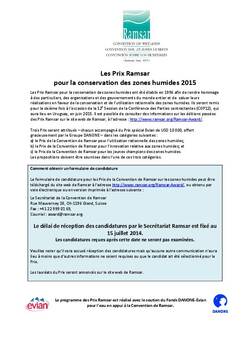 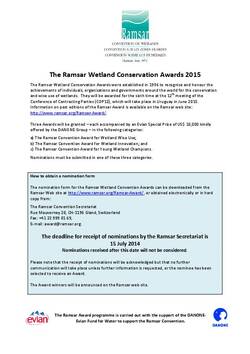