3. Thanks the State Party of Brazil for supporting the organization of an expert meeting on the relations between the World Heritage Convention, conservation and sustainable development, held in Paraty (Brazil) from 29 to 31 March 2010;

4. Welcomes the outcomes of the above-mentioned meeting and agrees that it would be desirable to further consider, in the implementation of the Convention, policies and procedures that maintain the Outstanding Universal Value of properties, and also contribute to sustainable development;

5. Also welcomes the proposed Action Plan for 2012 developed during the Expert Meeting at Paraty and presented in the above-mentioned Document, and encourages to reflect and to pursue the efforts to strengthen linkages between the World Heritage Convention and other relevant multilateral environmental agreements (MEAs);

6. Requests the World Heritage Centre, in close collaboration with the Advisory Bodies, to pursue the study of the revision of the Operational Guidelines, to integrate sustainable development, and to further consider these matters within the framework of the reflection on the Future of the Convention;

7. Also requests the World Heritage Centre, in close collaboration with the Advisory Bodies, to seek extra-budgetary funding to organize, within the framework of the reflection on the Future of the Convention, a consultative meeting on "World Heritage and Sustainable Development" with all States Parties and secretariats of the concerned MEAs, before the 36th session of the World Heritage Committee in 2012, and further requests the World Heritage Centre, within the limits of its capacity, to seek extra-budgetary funding for the implementation of the other activities mentioned in the Action Plan for 2012 presented in Document WHC-10/34.COM/5D;

8. Also requests the World Heritage Centre to identify opportunities, of potential collaboration with the UNESCO Man and Biosphere Programme (MAB), United Nations Environment Programme (UNEP), the Convention on Biological Diversity (CBD) and other MEAs, and taking into account the needs of Small Island Developing States (SIDS), in the form of pilot projects to address the relation between conservation and sustainable development at regional/ecosystem scales;

WHC-10/34.COM/20
Report of the Decisions Adopted By the world heritage committee At its 34th session (Brasilia, 2010) 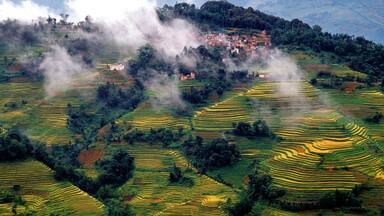