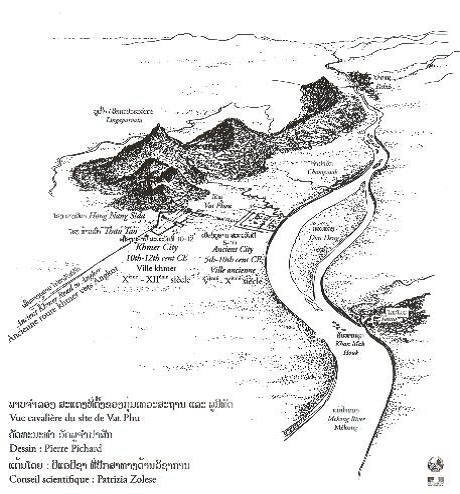 Support for the conservation and management of Vat Phou and Associated Ancient Settlements within the Champasak Cultural Landscape, Lao People's Democratic Republic

Located in the south of the Lao People's Democratic Republic, 500 km from Vientiane, the cultural landscape of Vat Phou, Champassak extends over 10 km, with a surface area of 39,000 hectares. Developed between the 5th and 8th centuries, it includes two ancient cities located in the alluvial plain, agricultural areas, a collection of temples, sanctuaries and hydraulic structures arranged along an axis linking Phou Khao mountain (1,416 m) and the west bank of the Mekong river.

In 2002, the attention of the World Heritage Committee was drawn to the possibility of a new road being built across Vat Phou and Associated Ancient Settlements within the Champasak Cultural Landscape. This concern was noted by the World Heritage Committee at its 27th session (Paris, 2003) in a decision whereby it requested the State Party to "submit a detailed topographical survey of the new north-south road in order to limit as much as possible any negative impact this road may have" (Decision 27 COM 7B.51).

In April 2010, after a long period of inactivity concerning the construction of the road, UNESCO received information that construction work had begun for road 14A and that its route would cross the property. The State Party was duly advised by the World Heritage Centre that the potential damage from the construction was in contravention of current legislation and the management provisions, and could endanger the Outstanding Universal Value of the property, therefore leading to its inclusion in the List of World Heritage in Danger.

Large-scale infrastructure projects that do not respect the surrounding environment are one of the potential threats that World Heritage sites can face. This is often due to a lack of sectoral and institutional coordination, a failure in the project design to realise the value of the sites, conflicts of power in terms of project management at national, regional and even local level and investors who are not used to having to consider World Heritage parameters in their specifications. When these issues are addressed in sufficient time, projects can be modified to respect environmental concerns and protect the values which led to the inscription of the property. It can give rise to remarkable examples of project management and development. The challenge is to deal with decisions already taken and projects already underway. In this case, corrective measures must be found, intervention phases identified and support provided to prevent operations leading to irreversible damage to the property. In order to do this, studies are needed at small and large scale, urban or rural, depending on each case, to identify the physical attributes required to manage change in an acceptable way.

From 2011 to 2014 the France-UNESCO Cooperation Agreement allowed the organisation of fact finding missions and technical support to the Lao authorities to identify the main axes of a landscape management strategy, with a view to conserving the values of the property. At the request of the Lao authorities, the experts involved in the conservation and protection of the City of Luang Prabang (Lao People's Democratic Republic) and the managers of the Val de Loire cultural landscape (France) were mobilised by the World Heritage Centre. They prepared a draft management strategy for the site, based on the restoration of the hydraulic system of the plain, consolidation of the management principles of Champassak as a riverine city and enhancement of the ceremonial axis linking the mountain to the river, as well as advocating a comprehensive study at the wider landscape level. They also raised the question of the management of riverine areas.

While awaiting the result of the reactive monitoring mission jointly conducted by the World Heritage Centre/ICOMOS/ICCROM in February 2012, an initial fact finding mission was carried out from 10 to 12 November 2011 for a preliminary needs assessment on research to improve the conservation of the site’s Outstanding Universal Value.

A second enquiry mission was conducted from 4 to 8 April 2013 at the request of the Laotian authorities. With the support of previous analyses and observations, the mission's goal was to complete the proposal for a strategic management study, to develop a wider scale plan for positive handling of the development pressure being applied to the site of Vat Phou. The Head of Cultural Landscape for the Val de Loire participated in the mission to provide her experience of managing a property on the World Heritage List. The specifications for the study were developed with the Laotian authorities. The specifications proposed conducting site studies at both small and large scale, developing a project for the strategic management of the territory at a scale extending to the city of Paksé and producing detailed urban development plans for the districts of Champassak, Soukhouma, Moulapamo, Phontong and Pathoumphone.

This preliminary study, similar in purpose to that carried out at Luang Prabang under the name of “Schéma de Cohérence Territoriale » ("Territorial Consistency Scheme") was intended to set the management parameters for the next 20 years.

A third mission was conducted from 9 to 16 March 2014, in order to meet the new Vice Prime Minister at the time, and to raise his awareness of the risks to the site from the construction project of the road running through it.

The conservation status of the site Vat Phou and Associated Ancient Settlements within the Champasak Cultural Landscape was reviewed several times by the World Heritage Committee, which emphasised the need to manage the planned road, even to suspend operations at times and to define a management scheme and detailed plans to ensure the implementation of the management plan, as well as a clear definition of the attributes that communicate the exceptional universal value of the property.