Categories
Cities Conservation of Cultural Sites Partnerships Restoration Urban Context
Carried out under the aegis of the France-UNESCO Cooperation Agreement, this project aimed to strengthen local capacity and sustain actions undertaken at the local level.

Surrounded by the huge Djurdjura, the Bibans and the Babors massifs, Béjaïa is among the oldest cities in Algeria, founded in 26 or 27 BCE by Emperor Augustus with the name Saldae. In the Middle Ages, the city became one of the most prosperous in the Mediterranean and a center of great learning. The Citadel, the most important historic monument of the city, with a surface area of 20,000 m2, is the result of exchanges between numerous cultures including: Roman, Hammadid, Spanish, Turkish, French and Arab-Muslim. It symbolizes an extinct cultural tradition and exhibits important periods in history.

The site has been listed as an Algerian national heritage site since 1968. Due to difficulties in the management of heritage, the Algerian government requested UNESCO to provide technical support to the Ministry of Culture and Communication and the national agency for archeology and protection of historic sites and monuments (Agence nationale d’archéologie et de protection des sites et monuments historiques) in the framework of a restoration project. In fact, despite efforts to undertake serious and effective work, these two bodies were faced with numerous difficulties such as a lack of trained staff, necessary budget, materials and cultural policy.

The site, which covers a surface area of 109 hectares, was in an alarming state of decay with some buildings, such as the Mosque, threatening to collapse. The site suffered from overgrowth of vegetation, humidity issues, and problems resulting from the successive transformations of structures which were readjusted without respect for coherence and with inappropriate methods.

The first technical assistance mission in 2003 conducted a feasibility study on the restoration of the Medina. Based on these results a preparatory phase to establish a safeguarding plan was conducted in early 2004, which was well received by local authorities. 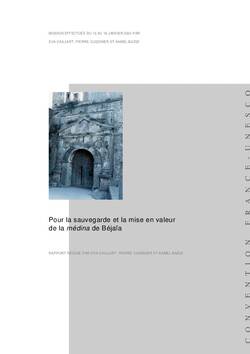