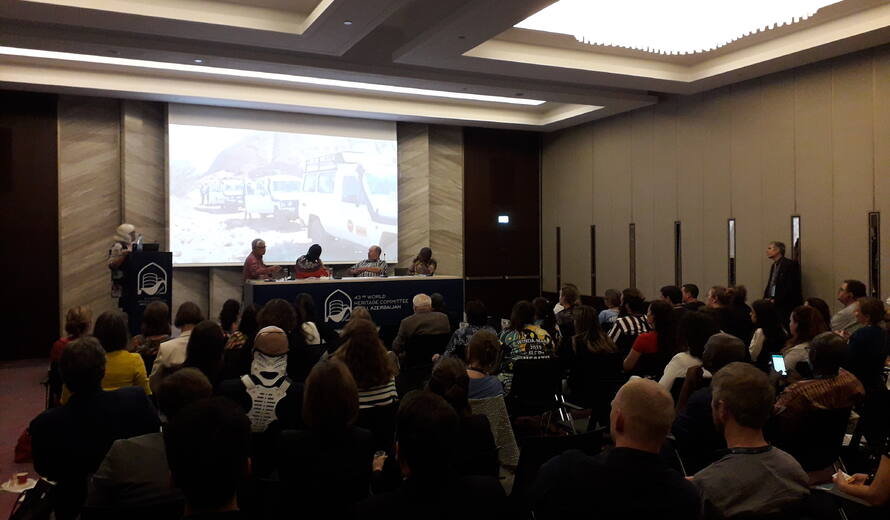 For the first time, indigenous peoples from across the globe gathered during the 43rd session of the World Heritage Committee in Baku, Azerbaijan, to highlight the importance of indigenous languages for safeguarding World Heritage properties. In an event marking the International Year of Indigenous Languages 2019, the indigenous panelists stressed that without language, there can be no transmission of community values and stories, and, therefore, no transmission of heritage to future generations.

Supported by the Government of Canada, the event, “Indigenous Languages for the Conservation of World Heritage” (5 July 2019), brought together indigenous peoples from Morocco, Solomon Islands, Japan, Greenland – Denmark, Canada, Mexico and Australia, and focused on 12 case studies.

Participants emphasized the importance of awareness-raising, inclusivity and the involvement of indigenous peoples and their languages in World Heritage conservation. “While many of us have the privilege and freedom of speaking our language without restrain or discrimination, indigenous languages around the world continue to disappear at an alarming rate,” highlighted H. E. Ms Elaine Ayotte, Ambassador and Permanent Delegate of Canada to UNESCO. Echoing these remarks, Mr Ernesto Ottone R., Assistant Director-General for Culture of UNESCO, stressed that “the International Year of Indigenous Languages was organized to draw the attention to the need to preserve, to re-vitalize and to promote indigenous languages and to take effective measures at the national and international level in response.”

The United Nations Permanent Forum on Indigenous Issues warns that 40 per cent of the estimated 6,700 languages spoken around the world are on the brink of disappearing. The loss of indigenous languages is particularly alarming, as these languages embody complex systems of knowledge and serve as a vital resource for development, peace building and reconciliation. Indigenous languages can also support the safeguarding of World Heritage properties, as they convey values and knowledge that can make site conservation and management more effective. At the same time, the inscription of a site on the World Heritage List can help preserve indigenous languages. “We are very happy to be a World Heritage site because it means that we now have a focus on our culture and language,” highlighted Ms Paninnguaq Fleischer-Lyberth, site manager of the World Heritage site “Aasivissuit – Nipisat. Inuit Hunting Ground between Ice and Sea,” located in Greenland, Denmark, which was inscribed in 2018.

In 2019, two more sites that feature indigenous languages in their name joined the World Heritage List: “Budj Bim Cultural Landscape” (Australia), located within the Country of the Gunditjmara, an Aboriginal nation in the southwest of Australia, and “Writing-on-Stone / Áísínai’pi” (Canada), a landscape considered sacred to the Blackfoot (Siksikáíítsitapi) people.

“We are very happy to be a World Heritage site because it means that we now have a focus on our culture and language” (Paninnguaq Fleischer-Lyberth, site manager)

Both events, as well as the participation of several members of IIPFHW, were made possible thanks to financial support from Canada.

The Parks Canada Agency is the proud sponsor of the side-event
“Indigenous Languages for the conservation of World Heritage".