In 1999, the Australian Committee for IUCN (ACIUCN) initiated a process for monitoring Australian sites that has now been applied to the Great Barrier Reef, Shark Bay and the Wet Tropics of Queensland. In the case of Great Barrier Reef, Focused Recommendations and a Framework for Management were adopted by the Committee and Australia has committed to submit a progress report on the implementation of priority actions to the twenty-sixth session of the Bureau in 2002. The Australian authorities have also agreed to work with ACIUCN to prepare a Framework for Management, based on Focussed Recommendations already discussed, for Shark Bay and the Wet Tropics of Queensland, as part of Periodic Reporting activities to be undertaken in the Asia Pacific Region during 2002/2003.

On 30 April 2001, a 9-year boy was killed by dingoes on Fraser Island.  This was the first recorded death in Australia by dingoes of a human over 1 year of age.  This death prompted a re-evaluation of the risk posed to humans by dingoes and a re-assessment of the management strategies outlined in the draft Fraser Island Dingo Management Strategy (March 2001).  The revised Strategy is now with the Queensland Government awaiting approval.

Immediately following the incident, the Queensland Parks and Wildlife Service (QPWS) undertook a cull of 31 dingoes to reduce the immediate risk to people from habituated dingoes that were frequenting areas heavily used by people.  This cull was a one-time operation.  A Risk Assessment Report (Risk Assessment: Risk to humans posed by the dingo population on Fraser Island, EPA, May 2001) was commissioned by the Queensland Environmental Protection Agency (EPA). The Risk Assessment provides direction for the immediate management of dingoes on Fraser Island and provides site-specific management recommendations.  As such it is complementary to the draft Fraser Island Dingo Management Strategy.The Risk Assessment outlined some previously unused management options at particular sites, including: (a) fencing of campgrounds and recreational areas; (b) active deterrence of animals in the vicinity of popular visitor areas; (c) restriction on taking of food to certain locations; and (d) time restrictions for visitors at some sites. Additional island wide management approaches recommended include: (i) limiting visitor numbers using a variety of approaches; (ii) significantly increasing fines and penalties for feeding dingoes; (iii) enhancing public education and awareness programmes; (iv) increasing enforcement through additional ranger presence; (v) increasing monitoring and research on the dingo

Elsewhere in Australia, and other range countries in Asia and Africa, most populations are, or will soon be, predominantly hybrid.  The IUCN Canid Action Plan lists the dingo as a threatened species.  With the 2nd edition of the Plan currently in preparation, the conservation status of the dingo is under review and may be upgraded to endangered.  Fraser Island may well be the only opportunity for the world to conserve a wild population of genetically pure dingoes.

Fraser Island does not have an exclusive Plan of Management, rather, it is catered for in the Great Sandy Region Management Plan (GSRMP).  The GSRMP covers the Great Sandy Region National Park, of which Fraser Island is a part, and also adjacent marine areas and some lands outside the protected area.  Released in 1994, it was prepared as a regional conservation plan with input from numerous government departments.  It does not have statutory status. The GSRMP is about to undergo a detailed review.  The process will involve substantial stakeholder and community input and is scheduled for completion in March 2003.  The review is explicitly considering a specific management plan for the Fraser Island World Heritage property, as well as a commitment to new legislative requirements for the World Heritage site.

On the 27 July 2001 the Queensland Government announced the allocation of an extra AU$1.75million towards the management of Fraser Island. AU$1 million has been earmarked this financial year for dingo management on the Island; the other AU$750,000 is to be spent employing eight permanent rangers for the Island.

“The Bureau commends the State Party/QPWS on the Risk Assessment and the draft Dingo Management Strategy and welcomes the State Party’s consideration of a variety of options including the imposition of visitor limits. The Bureau invites the State Party to provide further information on the visitor management strategy as it is developed. The Bureau welcomes the review of the GSRMP and its explicit recognition of Fraser Island as a World Heritage area requiring special management plans and legislative frameworks to protect the World Heritage site for perpetuity” 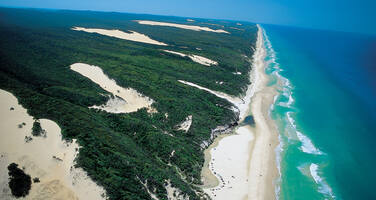