The cultural landscape of Bali consists of five rice terraces and their water temples that cover 19,500 ha. The temples are the focus of a cooperative water management system of canals and weirs, known as subak, that dates back to the 9th century. Included in the landscape is the 18th-century Royal Water Temple of Pura Taman Ayun, the largest and most impressive architectural edifice of its type on the island. The subak reflects the philosophical concept of Tri Hita Karana, which brings together the realms of the spirit, the human world and nature. This philosophy was born of the cultural exchange between Bali and India over the past 2,000 years and has shaped the landscape of Bali. The subak system of democratic and egalitarian farming practices has enabled the Balinese to become the most prolific rice growers in the archipelago despite the challenge of supporting a dense population. 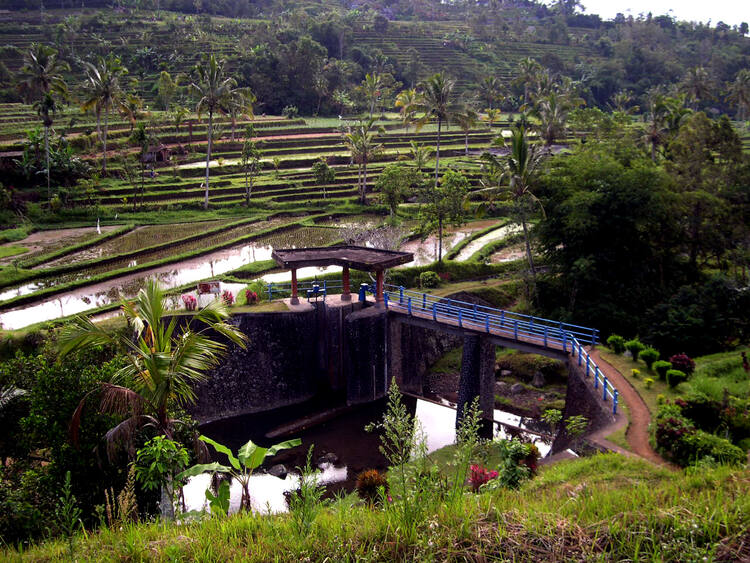 Cultural Landscape of Bali Province: the Subak System as a Manifestation of the Tri Hita Karana Philosophy. Water Reservoir © Ministry of Education and Culture of Indonesia

A line of volcanoes dominate the landscape of Bali and have provided it with fertile soil which, combined with a wet tropical climate, make it an ideal place for crop cultivation. Water from the rivers has been channelled into canals to irrigate the land, allowing the cultivation of rice on both flat land and mountain terraces.

Rice, the water that sustains it, and subak , the cooperative social system that controls the water, have together shaped the landscape over the past thousand years and are an integral part of religious life. Rice is seen as the gift of god, and the subak system is part of temple culture. Water from springs and canals flows through the temples and out onto the rice paddy fields.  Water temples are the focus of a cooperative management of water resource by a group of subaks . Since the 11th century the water temple networks have managed the ecology of rice terraces at the scale of whole watersheds. They provide a unique response to the challenge of supporting a dense population on a rugged volcanic island.

The overall subak system exemplifies the Balinese philosophical principle of T ri Hita Karana that draws together the realms of the spirit, the human world and nature. Water temple rituals promote a harmonious relationship between people and their environment through the active engagement of people with ritual concepts that emphasise dependence on the life-sustaining forces of the natural world.

In total Bali has about 1,200 water collectives and between 50 and 400 farmers manage the water supply from one source of water. The property consists of five sites that exemplify the interconnected natural, religious, and cultural components of the  traditional su b ak system, where the subak system is still fully functioning, where farmers still grow traditional Balinese rice without the aid of fertilisers or pesticides, and where the landscapes overall are seen to have sacred connotations.

The sites are the Supreme Water Temple of Pura Ulun Danu Batur on the edge of Lake Batur whose crater lake is regarded as the ultimate origin of every spring and river, the Subak Landscape of the Pakerisan Watershed the oldest known irrigation system in Bali, the Subak Landscape of Catur Angga Batukaru with terraces mentioned in a 10th century inscription making them amongst the oldest in Bali and prime examples of Classical Balinese temple architecture, and the Royal Water temple of Pura Taman Ayun, the largest and most architecturally distinguished regional water temple, exemplifying the fullest expansion of the subak system under the largest Balinese kingdom of the 19th century.

Subak components are the forests that protect the water supply, terraced paddy landscape, rice fields connected by a system of canals, tunnels and weirs, villages, and temples of varying size and importance that mark either the source of water or its passage through the temple on its way downhill to irrigate subak land.

Criterion (iii): The cultural tradition that shaped the landscape of Bali, since at least the 12th century, is the ancient philosophical concept of Tri Hita Karana . The congregations of water temples, that underpin the water management of the subak landscape, aim to sustain an harmonious relationship with natural and spiritual world, through an intricate series of rituals, offerings and artistic performances.

Criterion (v): The five landscapes within Bali are an exceptional testimony to the subak system, a democratic and egalitarian system focused on water temples and the control of irrigation that has shaped the landscape over the past thousand years. Since the 11th century the water temple networks have managed the ecology of rice terraces at the scale of whole watersheds. They provide a unique response to the challenge of supporting a dense population on a rugged volcanic island that is only extant in Bali.

Criterion (vi): Balinese water temples are unique institutions, which for more than a thousand years have drawn inspiration from several ancient religious traditions, including Saivasiddhanta and Samkhyā Hinduism, Vajrayana Buddhism and Austronesian cosmology. The ceremonies associated with the temples and their role in the practical management of water together crystallise the ideas of the Tri Hita Karana philosophy that promotes the harmonious relationship between the realms of the spirit, the human world and nature. This conjunction of ideas can be said to be of outstanding significance and directly manifest in the way the landscape has developed and is managed by local communities within the subak system.

The property fully encompasses the key attributes of the subak system and the profound impact that it has had on the landscape of Bali. The processes that shaped the landscape, in the form of irrigated, terraced agriculture organised by the subak system, are still vibrant and resilient. The agricultural areas are all still farmed in a sustainable way by local communities and their water supplies are democratically managed by the water temples.

None of the component parts is under threat but the terraced landscape is highly vulnerable to a range of social and economic changes, such as changes in agricultural practices and increasing tourism pressures. The management system will need to provide support to sustain the traditional systems and to provide benefits that will allow farmers to stay on the land.

Furthermore the setting of the various sites is fragile and under pressure from development particularly associated with tourism. The visual setting for the five sites extends beyond the boundaries and in many instances beyond the buffer zones. In a few cases some adverse development has already occurred. It will be essential to protect the wider context of the sites to avoid further loss of visual integrity. The management of water is also a critical element in maintaining the visual quality of the property.

The authenticity of the terraced landscapes, forests, water management structures, temples and shrines in terms of the way they convey Outstanding Universal Value and reflect the subak system is clear.

The overall interaction between people and the landscape is however highly vulnerable and, if the sites are still to reflect the harmonious relationship with the spiritual world and the ancient philosophical concept of Tri Hita Karana , it will be essential for the management system to offer positive support.

The village buildings have to a degree lost some of their authenticity in terms of materials and construction, although they are still functionally linked to the landscape.

The broad legal framework for the protection of the property was established by Provincial Decree of 2008 for conservation and spatial planning for the proposed sites. A specific legal framework for the areas has been established by a Memorandum of Understanding between the Government of Bali and Regencies of Bali for the Establishment of the Strategic Area of Bali. This agreement legally codifies conservation and spatial planning for the five sites, including tangible and intangible heritage and agricultural and forest ecosystems within the site boundaries. The Provincial Decree is based on National Law No. 26/2007, and National Government Decree No. 26/2008, concerning spatial planning and the establishment of National Strategic Areas for conservation of critical cultural landscapes.

Most subaks possess written legal codes, called awig-awig , which detail the rights and responsibilities of subak membership. Awig-awig , or traditional customary laws and regulations, including subak management and the traditional protection and conservation of cultural properties are covered by regulations of Bali Province Number 5 (2005) Section 19, that clarify zoning for protected sacred sites such as temples, based on local awig-awig . Rice terraces within the sites are also protected against large-scale tourism development by Tabanan Regency Decree No 9/2005.The temples and archaeological sites are currently protected under National Law No.5/1992 concerning Items of Cultural Heritage. The component sites are designed as Strategic Areas which may receive unusual levels of support from the Provincial Government.

A Management Plan has been adopted by the Provincial Government of Bali. This Plan puts in place a management system that aims to sustain traditional practices and deflect inappropriate development. The uses established management principles of ‘adaptive co-management by diverse stakeholders’ and modifies these to suit the Balinese context. It connects individuals, organisations, agencies, and institutions at multiple organizational levels by means of a democratic Governing Assembly.

All of the properties and their component parts are living sites still in heavy and continuous use by the local community. These sites are communally maintained by the subak system in the traditional manner. Temple maintenance is in the hands of the community who traditionally contribute funds and materials, and also volunteer labour for routine conservation measures that are carried out in cooperation with the local government and the Archaeological Office for Bali-NTB-NTT Province who provide the necessary expertise.

To sustain the living landscape ways will need to be found to provide more support to support the traditional systems and to provide benefits that will allow farmers to stay on the land. The protection of the setting of the landscapes will also be essential in order to protect the source of water that underpins the subak system.