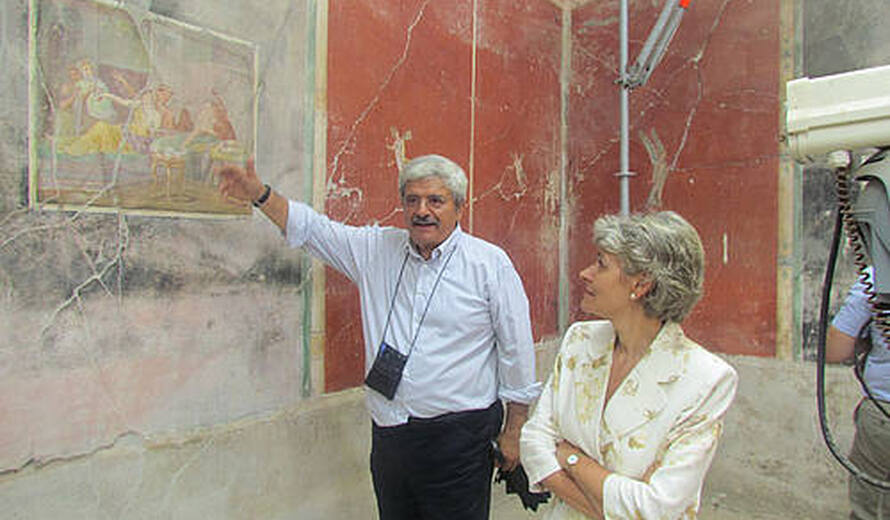 During her visit to Naples on the occasion of the World Urban Forum organized by UN-HABITAT, the Director-General, Irina Bokova, commended the Italian authorities, and in particular the Municipal authorities and Superintendency of Region for the positive emergency conservation achievements at the World Heritage archaeological complex of Pompei, following the collapse of walls in 2010 and 2011.

She expressed appreciation for the recruitment of 21 new and qualified technical staff to strengthen maintenance and management at the property, as well as progress accomplished by putting in place much-needed drainage, hydrological and restoration works, which have been initiated under UNESCO's supervision in 44 domus on the property.

The strengthening of cooperation and coordination between the various stakeholders involved in the conservation of the property - the Government of Italy, the Region and the Municipal authorities under UNESCO's leadership -- has proved especially valuable in making effective progress in the preservation of the archeological areas.

The authorities informed the Director-General about their intention to submit a preliminary report on the state of conservation before the end of the year in compliance with the decision of the World Heritage Committee.

The report will also provide necessary information on updating and the implementation of the Management Plan, integrating information on the expansion of the buffer zone, risk management measures and an emergency interventions plan that documents needs and addresses the pressure of tourism.

The Director-General also had a bilateral meeting with Mr. Luigi De Magistris, Mayor of Naples, during which they discussed the central role of cities for social and economic development through cultural investment and the revitalization of living expressions.

The Mayor emphasized the importance of inclusive urban policies for youth, in order to generate employment and ownership of the city and its cultural history and tradition.

He expressed great interest also in stimulating the safeguarding of the intangible cultural heritage through supporting community-owned know how and traditions, such as music, crafts and ceramics.

Irina Bokova also visited the World Heritage site of the Historic Centre of Naples, including the vestiges of the former Neapolis dating back to the Greek and Roman settlers. She congratulated the Municipal authorities, in particular Mr. Fabrizio Vona, Superintendent of the Museum Complex of the City, Mr. Gregorio Angelini, Director of the Regional Directorate of the Ministry of Culture, Ms. Teresa Elena Cinquantaquattro, Superintendent of Cultural Heritage of the city of Naples and the Archaeological Areas of Pompei, for the completion of the management plan for the property as per the Decision of the World Heritage Committee under the Agreement concluded between UNESCO, the Municipality of Naples and the Italian Government in February 2010, supported by the European Union. The Director-General expressed the hope that this would also facilitate the establishment of a new management structure for the property.

The Director-General also visited the World Heritage properties of Herculaneum, where she expressed satisfaction for the Herculaneum Conservation Project management system as a successful public-private partnership for the conservation of the archaeological property.

The visit was followed by the monumental 18th-century Royal Palace at Caserta with the Park, the Aqueduct of Vanvitelli, and the San Leucio Complex, created by the Bourbon King Charles III -- bringing together cultural and natural heritage, urban planning, as well as natural woodland, hunting lodges, and a silk factory.