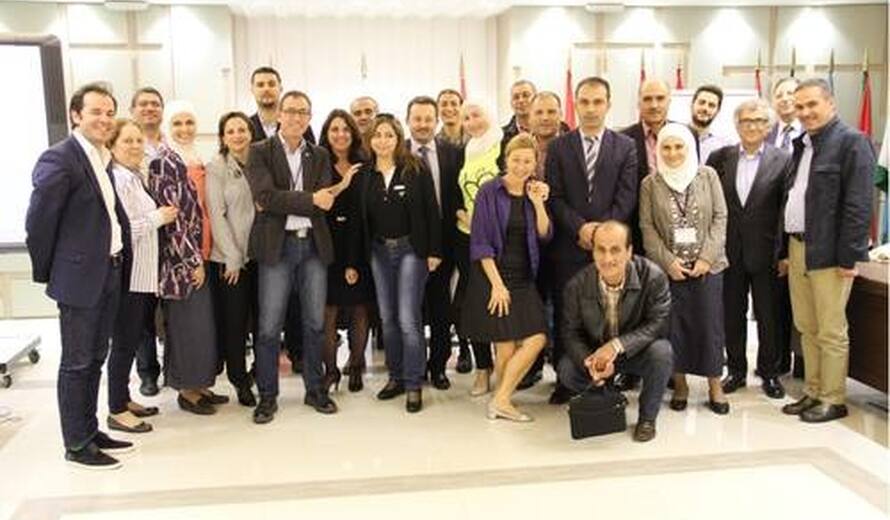 A recent fire that devastated a neighbourhood of the Ancient City of Damascus raised the alarm about the need to protect the old city, inscribed on the World Heritage list, from future catastrophes and sparked discussions about post-conflict action in Syria.

In April, a fire erupted in al-Asrooniya area, a commercial neighbourhood located between the Citadel of Damascus and the Great Mosque of the Umayyads inside the walls of the ancient city and home to several historic buildings. The fire was eventually contained but left the Ottoman Bank, a remarkable monument from the Ottoman era baring the influence of 19th century European architecture, extensively damaged.

“This unfortunate incident gives an impetus to develop a comprehensive plan for the protection of the old city of Damascus and other heritage sites in the country to prevent another disaster from occurring in the future,” said Nada Al Hassan, Chief of the Arab Region at the UNESCO World Heritage Centre.

A first aid support meeting for the ancient city of Damascus was held at UNESCO Office Beirut in the framework of the Emergency Safeguarding of the Syrian Cultural Heritage project funded by the European Union and supported by the Government of Flanders and Austria, and in partnership with the International Centre for the Study of the Preservation and Restoration of Cultural Property (ICCROM) and the International Council on Monuments and Sites (ICOMOS).

The meeting held on November 14 and 15 was an occasion for a delegation from the World Heritage Centre to discuss reconstruction strategies with officials from the Directorate-General of Antiquities and Museums (DGAM), the Governorate of Damascus, the Ministry of Tourism and other state and civil society experts.

The meeting stressed on the importance of implementing the decisions of the World Heritage Committee for any rehabilitation work taking place in old Damascus while recognizing obstacles and urgencies linked to the fact that it is a densely-inhabited and vital commercial site. The Ancient City of Damascus was put on the list of World Heritage Sites in danger in 2013.

Tarek Nahass, the Director-General of the Old City of Damascus, who has been overseeing the reconstruction of al-Asrooniya, spoke about efforts deployed to contain the fire in a timely manner. The fire was probably caused by an electrical short circuit and exacerbated by the presence of flammable materials, he said. Nahass said that the priority was the rapid reconstruction of al-Asrooniya to bring life back to the neighbourhood especially that the livelihood of many merchants depended on it. He also explained the challenges of preserving heritage in the current crisis situation. The restauration of the Ottoman bank will require a more thorough reflection. Meanwhile, interventions will be limited to emergency safeguarding of the monument.

In their management of the reconstruction phase after the fire was extinguished, Syrian officials implemented recommendations made in an emergency response plan for the Ancient City of Damascus developed by UNESCO and its partners in 2013. This plan was presented at the meeting by Cristina Menegazzi, UNESCO Project Officer for the Emergency Safeguarding of the Syrian Cultural Heritage project. Menegazzi recalled the importance of putting in place preventive measures to mitigate the effects of potential accidents in the future, and the need to create and train a disaster risk management team involving all the entities responsible for the preservation of the Ancient City of Damascus as well as local communities.

Following two days of talks about the rehabilitation of the neighbourhood as a pilot project, experts and officials came out with the following conclusions: the need for comprehensive coordination among the various parties managing heritage sites in the city, the inclusion of civil society in reconstruction efforts, awareness-raising among the local population about the risks of storing flammable materials, the value of their heritage and ways to respond effectively in crisis situations.

The participants agreed on the necessity of developing an integrated management plan for the Ancient City of Damascus emphasizing the importance of exhaustive documentation of the site. The meeting also mentioned the importance of using traditional materials for the sustainable preservation of the urban fabric. Another area of focus was the complexity of legal issues related notably to ownership and construction violations in the old city of Damascus. This paves the way for a larger future discussion about the rehabilitation of the Ancient City of Aleppo, which continues to be severely affected by the conflict.

“What happened in al-Asrooniya makes us cast a wider look at the situation of heritage in Syria,” said Sarab Atassi-Khattab, a heritage expert. “We need to mobilize ourselves to protect other threatened heritage sites.”

As follow-up to the meeting, UNESCO plans to provide a training to an all-inclusive team from Damascus on disaster risk management issues as well as organise a meeting to identify the most important documentation on the ancient city and other monuments. Identified documents will be digitized in a later stage and kept in a safe place. A joint UNESCO mission is also planned to further discuss the reconstruction of al-Asrooniya neighbourhood on the field.