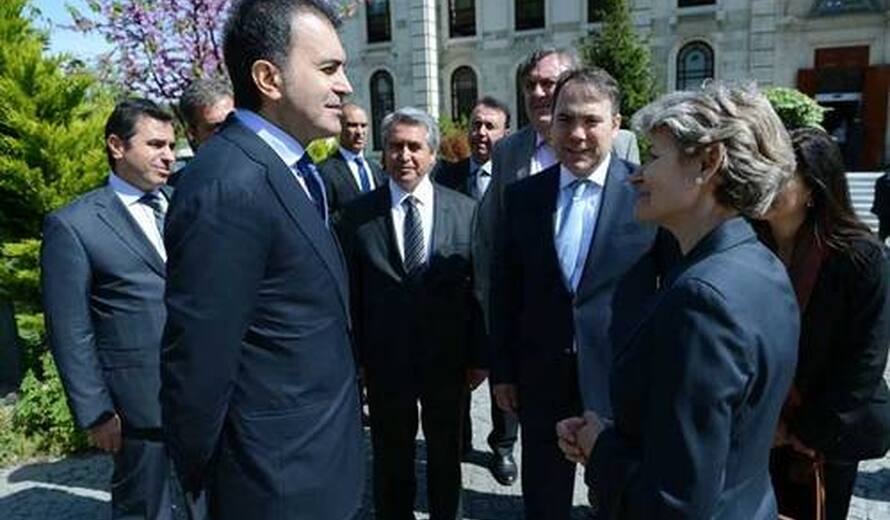 On 6 January, during her official visit to Turkey, the Director-General participated in a ceremony to present the World Heritage Certificates for the newly inscribed sites of “Pergamon Multi-layered Cultural Landscape” and “Bursa and Cumalıkızık: the Birth of an Empire” on the UNESCO World Heritage List, in the presence of H.E. Ömer Çelik, Minister of Culture and Tourism.

The ceremony took place at the stunning Museum of Anatolian Civilizations in Ankara, which opens a unique window onto the history, cultural wealth and diversity of Turkey, from the Paleolithic era through to the Ottoman period.

“I wish to congratulate the Government and the people of Turkey for these new inscriptions, which bring the total of sites in Turkey to 13 on the World Heritage List,” declared the Director-General.

“These sites carry special importance for every citizen of Turkey. They are also part of the wider history of all humanity, and this is the meaning of the concept of ‘universal outstanding value’ at the heart of the World Heritage Convention.”

Bursa and Cumalıkızık is a serial nomination, comprising eight sites, providing an outstanding example of the urban and rural system of the early Ottoman Empire, whose lessons reached well beyond its borders. Pergamon and its Multi-layered Cultural Landscape stands out as one of the foremost hubs of the Hellenistic period, with influences extending through the Roman and Ottoman periods.

“Both sites tell a story of constant exchange and dialogue across cultural and religious lines,” said Irina Bokova. “They tell a story of diversity, underpinned by respect and tolerance – this history belongs to all of us, and it is our responsibility to safeguard it for the benefit of all.”

The Director-General noted that these inscriptions celebrate the vision UNESCO and Turkey share, of humanity as a single community, with a single destiny. In reference to the cultural cleansing in Iraq and Syria, Irina Bokova said, "this is our response to extremism and the surest path to lasting peace."

H.E. Ömer Çelik, Minister of Culture and Tourism thanked the Director-General for the support of UNESCO and underlined the deep engagement of Turkey to safeguarding cultural heritage for the benefit of all humanity -- including also the need to fight against the illicit trafficking of cultural goods.

The Minister highlighted Turkey's commitment -- as "the world's largest open-air museum" -- to "UNESCO's ideals and principles" and intention to "take them to a new level."

"All this is a strong symbol of our joint commitment to renew and deepen the partnership between Turkey and UNESCO, for the benefit of all humanity," said the Director-General.