Most people know Bamiyan as the site where giant statutes of the Buddha were destroyed by the Taliban in 2001.  But it is the location of other important archaeological sites too, such as Shahr-i-Zohak (Red City), an impressive mass of ruins that was once the fortress protecting the entrance to Bamiyan in the 12th and 13th centuries.  Now this site will be restored and conserved as part of a new project in Afghanistan sponsored by UNESCO and the Government of Italy.

UNESCO’s Director-General, Irina Bokova, and Italy’s ambassador to Afghanistan, Luciano Pezzotti, made the announcement during the Director-General’s recent mission to Kabul (17 and 18 May). Bamiyan contains numerous Buddhist monasteries as well as forts from the Islamic period that testify to the interchange of Indian, Greek, Roman, Sasanian and Islamic influences.

The project - totalling 900,000 Euros - will include training in heritage management and awareness-raising of other archaeological sites that are on the Tentative List of UNESCO’s World Heritage, including Herat, Balkh and the Gardens of Babur. Herat dates back to the Avestan times and has a number of historic sites, including the Herat Citadel and the Mosallah Complex.  Balkh is an ancient city and centre of Zoroastrianism in northern Afghanistan.  The Garden of Babur is an historic park in Kabul.

UNESCO and the Governments of Italy and Afghanistan have cooperated on heritage protection for more than five decades thanks to the work of Italian organizations and universities.  Activities include expert missions to the Minaret of Jam and Herat, led by UNESCO with expert guidance from Professor Andrea Bruno, as well as excavations led by Professor Giuseppe Tucci, founder of the Italian Archaeological Mission in Ghazni.  UNESCO-Italy collaboration gained new impetus after 2002, when Italy rehabilitated the Mausoleum Abdul al-Razzaq in Ghazni, protected of the Minaret of Jam from seasonal flooding, and took emergency measures to protect the Fifth Minaret in the Musalla Complex in Herat.

In her recent visit to Afghanistan, the Director-General of UNESCO expressed the Organization’s gratitude to Ambassador Pezzotti.  The ambassador emphasized Italy’s commitment to international support for cultural development in Afghanistan.  This new initiative will complement existing funding from the Government of Japan and Swiss Development Cooperation to safeguard the World Heritage site of Bamiyan. The coordinated approach will engage a range of international and Afghan institutional partners to safeguard Afghan heritage and stimulate development at the Bamiyan Valley. 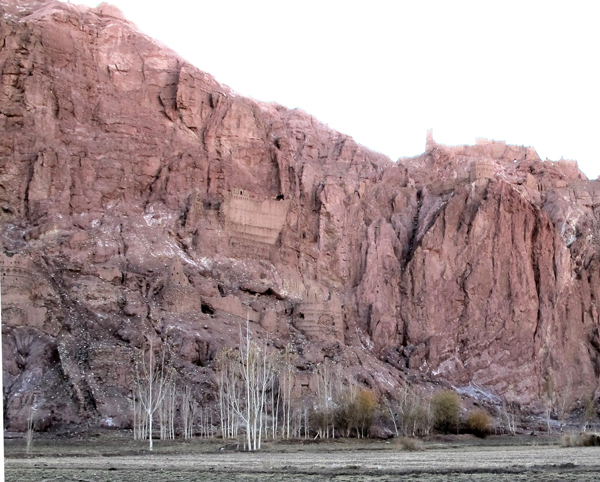 UNESCO will coordinate the project which will target the conservation and development of the ancient Islamic remains of Shar-e- Gholghola in Bamiyan involving the Ministry of Information and Culture of Afghanistan, the Délégation archéologique française en Afghanistan (DAFA), and the International Council on Monuments and Sites (ICOMOS Germany) with the scientific expertise of Professor Andrea Bruno. An audio-visual record of conservation works will also be developed as integral part of the project by Italian TV journalist and documentary film maker Duilio Giammaria in order to raise awareness both inside and outside Afghanistan on the importance of heritage protection and cultural development.

As part of UNESCO’s coordination role in the culture sector in Afghanistan, Italy has also agreed to host two important meetings convened by UNESCO later this year: on the history, art and archaeology of Ghazni in Naples, and the 12th Bamiyan Expert Working Group in Orvieto. These coordination mechanisms aim to advise the Afghan authorities on issues of conservation, archaeology, urban development, management and planning for heritage sites.

Italy will also lend its financial support to UNESCO and the Ministry of Information and Culture of Afghanistan to organize the Second International Conference for the Safeguarding of Afghanistan’s Cultural Heritage in September 2013. The conference will bring together a range of national and international partners, communities and government representatives to highlight the role and potential of culture as a pillar of sustainable development in Afghanistan.