The following threats were identified at the time of inscription of the property on the World Heritage List:

a) Theft and vandalism;

b) Pollution of the Vaal River;

At the time of its inscription in 2005, the World Heritage Committee noted that the nominated property requires special management and collaboration with landowners to ensure its integrity and requested the State Party to clearly define the legal boundaries for the three satellite component sites of the serial property. The World Heritage Committee also requested a monitoring mission to evaluate the progress made with the above actions; the mission took place in April 2008. In its decision 32 COM 7B.2, the World Heritage Committee requested a report to its 33rd session on progress made in implementing the recommendations of the 2008 monitoring mission, and in providing adequate legal protection to the property.

Concurrent to the proclamation of the property, the State Party has initiated a process to review the 2007 integrated management plan (IMP) of the Vredefort Dome in order for the Minister to approve it. The first draft of the reviewed IMP was discussed with the concerned stakeholders at a workshop held on 24 January 2009. The State Party expects that the final IMP will be ready for approval by the Minister by April 2009. The report also notes progress regarding management, the funding for a management team of seven staff being in place. Three of the posts have been filled, and a number are currently vacant but presumed to be under recruitment. An on-site office that serves as an interim information centre is in place and staffed by three Information Officers. IUCN considers that the appointment of suitably skilled and effective staff to this team will be a key issue, especially given the challenging stakeholder relations that exist with the property. A specific task of the management team should be the surveillance and protection of sensitive geological localities.

World Heritage properties are also governed by the National Environmental Management: Protected Areas Act, No 57 of 2003 and its 2005 Regulations. Thus development in a World Heritage property that is not compliant with any of the relevant legislations together with the World Heritage Convention requirements and is therefore an illegal activity and punishable under South African Law. The State Party considers that within the Vredefort Dome, the non-proclaimed status of the property and the fact that 99% of the land in the property is privately owned, makes it difficult to ensure compliance at this stage.

This fact is underlined by a recent audit by the North West provincial Department of Agriculture, Conservation and Environment of compliance that confirmed that almost all developments in the Vredefort Dome are illegal in terms of the Environment Conservation Act, 1989 (ECA). The study continued to state that some of these developments are having such irreplaceable negative impacts on the environment that they ought to cease immediately because they are in breach of the Duty of Care provided for in the National Environmental Management Act, No 107 of 1998 (NEMA). The State Party provides the results of this study which lists 46 different illegal developments which primarily appear to relate to leisure related activities, and which note pollution and waste management as amongst the key areas of concern. No similar assessment of development activity was reported regarding the part of the property in the Free State Province. IUCN has also recently received information suggesting that helicopter flying for tourists has increased dramatically and motorized recreation is also taking place, which may both also have an impact on the qualities and visitor experience of the property.

The landowners from both provinces within which the property is located have been informed in November 2008 that, in the words of the State Party report: “if the situation continues unabated, government might be forced to recommend that the property be de-listed from the World Heritage List”. A letter is provided by the State Party as part of its report in which the Deputy Director of Biodiversity and Conservation indicates to the landowners within the property that he is minded to recommend this course of action to the relevant Minister. The State Party further reports that during a meeting that was held on 17 December 2008, the stakeholders recommended that government should write a letter to the World Heritage Centre to request a joint World Heritage Centre/IUCN reactive monitoring mission to assess the extent of the impact of developments on the values of the property, and also outlines a remedial process that is also envisaged within national legislation.

The report also notes that road infrastructure developments have taken place through Provincial projects, while other projects are at an advanced stage and will be implemented. The World Heritage Centre and IUCN recommend that careful consideration is given to these developments and that road construction impacts on the geological values of the property should be carefully considered and that the State Party provides further details of the anticipated development to the World Heritage Centre. A major state-funded exhibition centre for the Vredefort Dome, located just outside the property near the town of Vredefort (Cape Province) is nearing completion.

The report notes the concerns regarding pollution in the Vaal River System and provides extensive details of the water and catchment management plans and activities. There appears to be no doubt that there is extensive planning in place, however there are also challenges in implementation. In order to address sewage spillage into the Vaal River, numerous meetings were held with the municipality that is considered to be the source of the pollution with Ngwathe Municipality (Free State Province). The municipality has been requested to increase the capacity of their treatment plant and to submit a costed business plan that will assist in determining the magnitude of the problem and the resources needed, although the response and timeline for a response to this request are not noted. The World Heritage Centre and IUCN also note that the concerns regarding many of the illegal developments listed by the State Party relate to sewage and waste disposal. The report also notes that the North West Provincial Government is currently in the process of finalising a Land Use Management Bill (LUMB) for the province, which if accompanied with effective implementation may provide a means to better regulate development in the future. No details are provided regarding land use activities in the Free State Province.

The World Heritage Centre and IUCN consider that the State Party report indicates that there are causes for concern regarding the Vredefort Dome, which are most clearly underlined by the letter sent to the landowners by the Government. Whilst there are a number of underlying issues, the key points that require attention are the installation of effective legal protection of the property and the establishment of effective governance and implementation of regulation and an urgent finalization of the proclamation of the status of the property. IUCN also remains concerned that the State Party report does not indicate clearly a common level of policy and protection between the two provinces whose territories include the Vredefort Dome. The relationship with the private landowners who own almost all of the property, and their responsibilities to its conservation, appear to be the key factor in determining whether the property can meet the expectations of the protection of integrity, and delivery of effective management set in the World Heritage Convention. The World Heritage Centre and IUCN also note that the State Party has requested a further reactive monitoring mission in relation to the illegal developments that have taken place within the property. The World Heritage Centre and IUCN consider that such a mission could not arbitrate on individual developments, but might be helpful in setting the parameters for this exercise. A mission should however focus on considering the regulations, the completed management plan, the land use management powers of the Management Authority, conservation and protection of specific vulnerable geological sites, the natural landscape, and the provision of appropriate access arrangements to the key sites.

The World Heritage Centre and IUCN also consider that if the above mentioned issues are not addressed by 2010, this could present a case for possible inscription of the property on the List of World Heritage in Danger, in conformity with the Operational Guidelines.

3. Takes note of the report of the State Party, including the noted progress and the assessment of the significant challenges facing the property, notably in relation to protection and effective management of its values, governance and the relationship with private landowners, and wider threats from illegal development and water pollution;

4. Regrets that extensive illegal developments have taken place and have had a negative impact on the Outstanding Universal Value of the property;

6. Also takes note of the wish of the State Party to invite a joint World Heritage Centre / IUCN monitoring mission to the property to assess the extent of the impact of developments on the values of the property and how this may be remedied, and invites the mission team to also advise, jointly with the stakeholders, on the development of an action plan to ensure that the property's effective protection and management can be rapidly put in place, as well as to advise on defining clearly the legal boundaries for the three satellite component sites of the serial property;

3. Takes note of the report of the State Party, and both the progress noted and its assessment of the significant challenges facing the property, notably in relation protection and effective management of its values, governance and the relationship with private landowners, and wider threats from illegal development and water pollution;

4. Regrets that extensive illegal developments have taken place and have had a negative impact on the Outstanding Universal Value of the property;

6. Takes note of the wish of the State Party to invite a joint World Heritage Centre / IUCN monitoring mission to the property to assess the extent of the impact of developments on the values of the property and how this may be remedied ; and invites the mission team to also advise, jointly with the stakeholders, on the development of an action plan to ensure that the property’s effective protection and management can be rapidly put in place ; 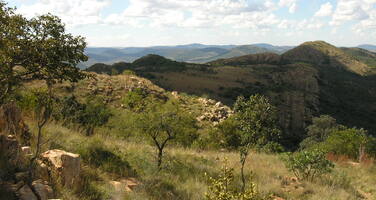