European Project "Protection of Cultural Heritage and Diversity in Complex Emergencies for Peace and Stability" USD 25,000

On 30 January 2018, the State Party submitted a state of conservation report, which is available at http://whc.unesco.org/en/list/184/documents/. Progress in a number of conservation issues addressed by the Committee at its previous sessions is presented in this report, as follows:

The information provided by the State Party demonstrates its commitment for the conservation of the Archaeological Site of Sabratha despite the prevailing conflict in the country and the lack of funds.

The damages incurred at the property due to the armed conflict, in conjunction with the difficulties to improve the situation and undertake appropriate protection and conservation measures, are of great concern. The property needs a comprehensive strategy for its management and conservation in order to better address the effects of the armed conflict, vandalism, urban encroachment, weathering (humidity, salt, sea water), and vegetation growth, among others. It is therefore recommended that the Committee call for the support of the international community for the conservation and protection of the property.

Concerning the urban encroachment issue raised in the previous state of conservation report, which referenced satellite images taken in 2012 and 2016 showing 620 new constructions in Sabratha, the State Party contends that there are in fact 2 new constructions within the proposed boundaries of the property and 31 within the buffer zone. This discrepancy should be addressed in the context of the State Party’s current efforts to elaborate a map of the property’s boundaries and buffer zone. It is therefore recommended that finalizing this map be given priority by the State Party.

It is also recommended that the important efforts made by the State Party for the elaboration of a strategy for the protection of Libyan World Heritage properties build on the short- and medium-term measures identified during the International Meeting on the Safeguard of Libyan Cultural Heritage, held in Tunis in May 2016. The report is available at http://whc.unesco.org/en/news/1496.

Other sources report that there is an increasing awareness at the level of the civil society and the local authorities about the necessity to protect cultural heritage in Libya, including the properties inscribed on the World Heritage List. The meeting of the five-member Union of Libyan World Heritage Municipalities (Sabratha, March 2018) called for government measures to protect Libyan properties and stressed the need for coordination and coherence between the relevant authorities in this matter. 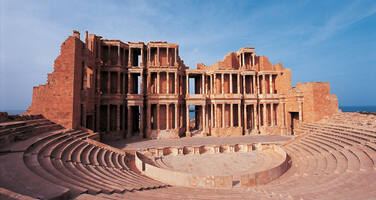