Threats identified at the time of inscription in 2013:

On 28 January 2015, the State Party submitted a state of conservation report, which is available at https://whc.unesco.org/en/list/247/documents/. The report responds to the request of the World Heritage Committee, at the time of inscription, notably addressing the major conservation project at Jaisalmer, and the conservation work at Chittorgarh and Kumbhalgarh Forts, as well as the potential threats to Chittorgarh from industrial and mining activities raised in Decision 37 COM 8B.31:

The World Heritage Committee requested reassurance, at the time of inscription, that the major conservation project for infrastructure and conservation of individual buildings at Jaisalmer Fort would be delivered according to the agreed timescale, in the light of the extreme vulnerability of the hill on which the fort stands to water seepage, and the large number of buildings within the fort that needed attention.

The State Party only reports that work is ongoing, with no details on work undertaken since inscription or reassurances on the agreed timetable being maintained. Worryingly, the report also states that various unauthorised construction activities are rampant and out of control and could add to the already existing sources of water seepage.

At the time of inscription, it was noted that the Management Plan for the Jaisalmer Fort along with sub-plans including visitor management, risk preparedness, and livelihood generation for the local population, would be completed by end of 2013. It is therefore of concern to note from the State Party report that no concrete progress with these plans appears to have been made since inscription and that they are all still in preparation, notwithstanding the view expressed that Plan is seen as the way to control illegal development.

It is recommended that the World Heritage Committee request further details on the progress with the major Jaisalmer infrastructure and conservation project, and its timetable, in order to ensure that the authenticity and intuit of this component are not threatened. It is further suggested that the Committee request the submission of the completed Management Plan for Jaisalmer Fort by an agreed date.

The information provided by the State Party on mining in the setting of Chittorgarh is not clear. From information in the public domain, it is understood that in 2011, the Rajasthan High Court directed that no mining should take place within 10km of the Fort, in order to stop adverse impacts from vibrations, dust and traffic. However in May 2013, a month before inscription, the Rajasthan High Court, in response to a challenge by a mining company, gave a temporary relaxation for mining within 10km but without blasting. Such a relaxation, that was not known at the time of inscription and has not been formally notified until now, could cause adverse impacts on the Fort. Although it is stated that a technical study on impacts is being considered by the Supreme Court of India, this would appear to suggest that blasting as well as mining might be considered within the 10km zone. On 19 March 2015, the World Heritage Centre requested the State Party to provide clarification on this matter. At the time of preparing the working document, no information has been provided.

The information provided by the State Party on the consolidation measures undertaken and foreseen for the Kumbhalgarh Fort is not detailed enough. It is recommended that the Committee also request further information on this issue to the State Party and express its concern that the commitment given at the time of inscription to progress the conservation project at Jaisalmer has not led to any significant progress being made. Furthermore, the protection and management of the setting at Chittorgarh does not appear to be effective. 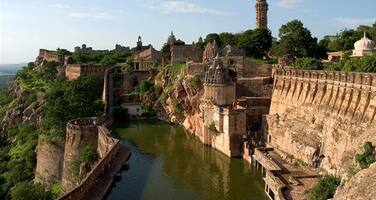