The Permanent Delegate of Greece to UNESCO informed the Centre by letter of 30 March 1995, that the Medieval City of Rhodes is a mixture of architecture dating from the time of the Knights, Ottoman architecture and eclectic buildings. The City was declared a historical monument, protected by the Archaeological Service, which applied the 1932 decree (Decree K.N. 5351). The protection concerns all the buildings, but the most interesting ones, declared historic monuments, receive special attention on the part of the Archaeological Service.

In 1984, in order to improve protection of the Medieval City, a conservation and restoration bureau was created thanks to a contract between the Ministry of Culture, the Town Hall of Rhodes and the Archaeological Fund. The objective of the Bureau is to protect the City, relodge its inhabitants and develop activities which are adapted to its character, such as small-scale artisanal activities and tourism, etc. The Bureau encourages activities for the restoration of monuments as well as roads, pedestrian areas, sewage works, rainwater drainage networks and anti-fire facilities, etc.

The Archaeological Service controls the following activities: a) the restoration of public or private buildings: facade, stone decorations, doors and windows, wooden constructions, wall colourings, etc.; b) the use of the buildings; c) the size and height; d) the construction of new buildings; e) the compulsory purchase of buildings of specific architectural interest; f) the cleaning and transformation of archaeological sites; g) intervention on the facades of stores and shops, and control of the use of unsuitable publicity signs, not in conformity with the monumental character of the City; h) the conservation of the existing plan; and, finally, archaeological research, excavation and the conservation of the fortifications and monuments.

The Bureau takes note of the information provided by the authorities of Greece on the legal protection and the management arrangements for the City.

The Secretariat informed the Bureau that, as requested by the World Heritage Committee at its eighteenth session, the Greek authorities had presented information on the legal protection and the management arrangements for the City. The Bureau requested the Secretariat jointly with ICOMOS to examine the information provided and to report on it to its next session in December 1995. 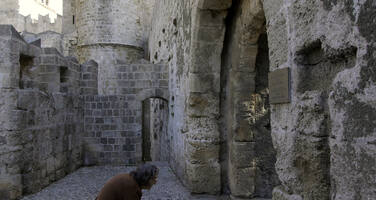