Human Origin Sites and the World Heritage Convention in Eurasia

The purpose of this publication and its two volumes is to present the reader with a panorama of Human Origins in Eurasia, by bringing together key papers written by leading scientists in the domain of research into human origins. The first volume focuses on the topic of Human Origins in Eurasia, whilst the second volume focuses entirely on the case of the Swabian Jura Aurignacian, particularly important in relation to some of the major research issues surrounding the dispersal of modern humans on the continent. The perspective of this publication is on Eurasia as a whole, transcending modern, political, cultural and regional frontiers, and thus allows for a greater and more profound study of prehistoric archaeological sites.

The volumes and their papers offer a series of current reflections and a summary of the latest research methodologies and recent discoveries in human evolution and dispersal patterns gathered from the most important prehistoric archaeological sites in Eurasia and their material culture. The volumes provide a compelling interface between the ongoing hypothesis of researchers and the general interests of the scientific community, highlighting the role of the international cooperation in this endeavour and thus enabling State parties to identify the way in which sciences are the best ally to assess the concept of Outstanding Universal Value in regards to Eurasian prehistoric legacy. These contributions are fundamental in understanding the significance of exceptional Eurasian cultural resources that make up our human story.

Up till now, archaeological sites related to human origins and social evolution have not benefited sufficiently from the international community’s efforts to protect our former ancestors’ heritage. The significance of this heritage of human evolution has been overlooked for decades by current heritage scholarly traditions, as a middle-land between biology, palaeoanthropology and geology, distant disciplines from cultural studies. These pages demonstrate that there are very few more accurate and relevant examples like the first step of human evolution that could deeply implement the will of the Natural and Cultural World Heritage Convention.

These volumes, full of wide-ranging and interdisciplinary material, brings together invaluable and up-to-date information and research from leading professionals in the field, useful to a whole ream of people; specialists, heritage managers, teaching professionals, students and the general public.

The discussions in this publication came from the international meeting, Human Origin Sites in Eurasia and the World Heritage Convention, held at the University of Tübingen, Germany, from 25 February to 1 March 2013. 29 scientific experts of 13 different nationalities, representing 25 international institutions, attended.

We conclude this introduction by extending our sincerest appreciation to the University of Tübingen, the academic hierarchy for their warm hospitality and assistance in hosting the international meeting. Special thanks to Prof. Nicholas Conard and his outstanding team at the University of Tübingen whose invaluable discussions led to this publication and, as always, my gratitude goes to the HEADS Scientific Committee for their enduring work in bridging the gap between such paramount scientific research and World Heritage. I also extend my heartfelt thanks to Dr Robin Dennell, whose work and commitment to the HEADS Programme in Eurasia has been instrumental to the project’s success. I would also like to recognize the dedication of all the international experts whose work in the study of human evolution in Eurasia has made this publication a reality. It is thanks to this exceptional and brilliant group of people, whose academic, professional and personal commitment are second to none that a publication of this calibre was possible. Last but not least, I thank the UNESCO team for their assistance and support on this paramount topic of human evolution and dispersal patterns in Eurasia. 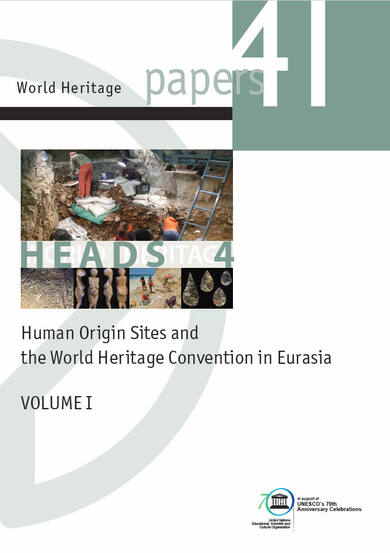