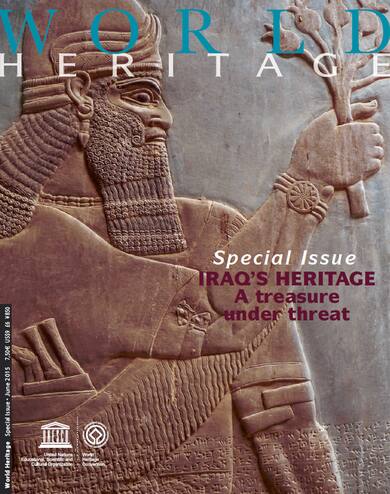 Cultural World Heritage sites are representative of the creativity and genius of humanity. While World Heritage belongs to everyone, and we share the responsibility to protect it, each site embodies the history, values, beliefs and skills of the people who created it. Whenever a cultural site is destroyed, it is a particularly devastating loss for those who hold the site as a reflection of their history, culture and identity.

The deliberate destruction of cultural heritage, such as we have witnessed in Iraq, is more than that of buildings or sculptures. It is cultural cleansing – aiming to destroy the dignity of the people who view this heritage as a reflection of their very identity. Iraq currently has four sites inscribed on the World Heritage List. This issue attempts to convey the splendour of these sites, as well as others that are part of the country’s Tentative List and could be inscribed in the future.

Hatra, inscribed in 1985, is a large, fortified city which withstood invasions by the Romans in AD 116 and AD 198, thanks to its high, thick wall reinforced by towers. In April 2015, elements of this 2,000-year-old site were deliberately destroyed. The ancient city of Ashur (Qal’at Sherqat) was simultaneously inscribed on the World Heritage List and the List of World Heritage in Danger in 2003. It dates back to the 3rd millennium BC, and from the 14th to the 9th centuries BC it was the first capital of the Assyrian empire.

In 2007, Samarra Archaeological City was also inscribed on both Lists. Samarra is the site of a powerful Islamic capital city that for a century ruled over the provinces of the Abbasid empire extending from Tunisia to Central Asia. The 9th-century Great Mosque and its spiral minaret are among the numerous remarkable architectural monuments of the site, 80 per cent of which remain to be excavated.

Erbil Citadel was inscribed on the World Heritage List in 2014, and is a former fortified settlement on top of an imposing ovoid-shaped tell in the Kurdistan Region of Iraq. A continuous wall of house façades still conveys the visual impression of an impregnable fortress, dominating the city of Erbil. Historical records document the antiquity of settlement on the site – Erbil corresponds to ancient Arbela, an important Assyrian political and religious centre.

The heritage of Iraq is not limited to those sites with World Heritage status, or with that potential. It encompasses these and other places that make this country unique. They are all at risk.

The value of these sites is obvious, and their loss would be irretrievable. Ashur, Hatra and Samarra are located in highly volatile conflict areas, where destruction, looting and the illicit traffic of cultural property has become a growing concern, and the situation is evolving every day. This issue of World Heritage draws attention to the sometimes little-known heritage of Iraq, highlighting its value and showing what is being done to protect it. The authors, among them Iraqi officials, international and UNESCO experts, highlight actions that are under way to protect this heritage, for Iraqi citizens and for the world.

Message by Irina Bokova, Director-General of UNESCO
The importance of cultural heritage in Iraq

Iraq is a vast museum that encompasses some of humanity’s cultural heritage and generously presents it to the world despite all the prevailing challenges.

UNESCO’s action in Iraq since 2003

In the aftermath of the 2003 conflict, and as a result of the destruction and looting of Iraq’s cultural heritage, UNESCO’s role was crucial in addressing emergency needs.

UN Security Council resolutions impose a collective commitment on states, which are required to act in order to satisfy the mandatory standards prohibiting trade in cultural property.

Since the diverse intangible heritage of the region is under severe threat, it is important that UNESCO continue to monitor the situation and support displaced communities through heritage education.