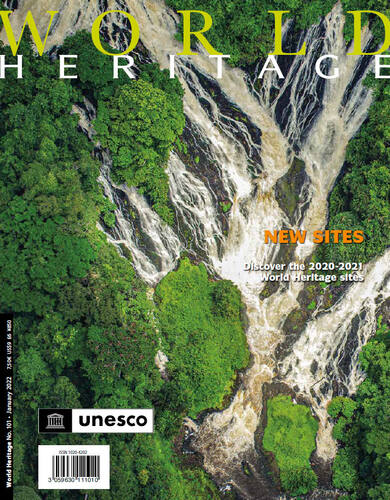 This year we will celebrate the 50th anniversary of the World Heritage Convention: a unique legal instrument that protects both both cultural and natural heritage. Because of this, the World Heritage List includes the most spectacular sites across the globe, and continues to grow.

The World Heritage Committee, made up of 21 elected countries, meets each year to assess the state of conservation of sites on the World Heritage List, and to add new sites to it. Due to the COVID-19 pandemic, the World Heritage Committee could not meet in 2020, meeting instead in July 2021 to discuss the sites proposed for 2020 and 2021. In a historic reunion held online from Fuzhou, China and UNESCO Headquarters in Paris, France, 132 countries participated via Zoom, and the session was webcast in six languages. During the proceedings, over 180,000 people visited the UNESCO World Heritage Centre website.

In this issue, we are happy to present the 34 sites that were added to the World Heritage List during that session, from the Spa Towns of Europe, with 11 spa towns across seven countries, to the biodiversity-rich Japanese serial site of Amami-Oshima Island, Tokunoshima Island, the northern part of Okinawa Island, and Iriomote Island. The remote and mountainous Cultural Landscape of Hawraman/Uramanat in Iran bears witness to the traditional culture of the Hawrami people down through the millenia, and the vast 300,000 ha of Ivindo National Park in Gabon includes spaces that have not yet been explored completely. These and more you will discover in these pages.

But adding sites to the World Heritage List is not an end in itself. By joining the Convention, each country commits to safeguarding these sites, and the unique values they embody, for the present and future. At a time when armed conflict, climate change and biodiversity loss are affecting sites around the globe, it is more important than ever to share our knowledge and resources and to act for the future of our planet.

I am very pleased to take on the role of Director of the UNESCO World Heritage Centre, following the departure of my dear colleague Mechtild Rössler to a well-deserved retirement.

I look forward to facing the challenges ahead in protecting World Heritage alongside UNESCO staff, the national and local authorities, site managers, young people, and the citizens who care so deeply about protecting our common legacy – as we look ahead to the next 50 years of World Heritage conservation.

What is World Heritage?