The purpose of the Funds-in-Trust is to preserve the tangible cultural heritage such as historic monuments and archaeological remains of great value.

Activities financed by the Funds-in-Trust

The Funds-in-Trust finances those activities which comply with this objective, such as restoration and preservation work and the necessary preliminary or general studies and surveys (including limited archaeological excavation work) for this purpose. The relevant services of international experts and equipment may be provided according to need. As the training of national specialists constitutes a major part of such co-operation, each project shall include activities for training in the relevant fields. Conversely, those activities which are not directly related to the aforementioned objective, such as the construction or development of an on-site museum or the installation of new structures for developing cultural tourism, shall not be the subject of funding.

More information on the Funds-in-Trust

In spite of the efforts made over the years by UNESCO, together with other institutions collaborating with it, both at the normative as well as operational levels, there are still many sites, historic monuments and other vestiges of the cultural heritage common to humankind which are threatened with serious degradation, and even disappearance, for lack of appropriate intervention. Deeply preoccupied by this problem, Japan ranks among the Member States which have kindly lent their active support to UNESCO's action, as illustrated by the financial and technical assistance provided by the Japanese Government to various international campaigns such as those for the safeguarding of the Temple of Abu Simbel in Nubia, the Temple of Borobudur (Indonesia) and the archaeological site of Moenjodaro (Pakistan). In 1988, Mr Noboru Takeshita, the Japanese Prime Minister, announced in London that the strengthening of cultural exchanges would henceforth be one of the pillars of Japanese foreign policy in regard to international co-operation. In the framework of this new cultural policy of co-operation, the field of preservation of the cultural heritage was selected and, in 1989, the Japanese Government deposited with UNESCO a fund specifically for that purpose called "The Japanese Funds-in-Trust for the Preservation of the World Cultural Heritage", thereby confirming its determination to support the joint efforts of UNESCO and the countries concerned.

Identification and selection of projects

Projects may be proposed both by UNESCO and the Japanese authorities on the basis of requests for assistance submitted by the governments, which wish to apply for this co-operation for their significant tangible cultural assets. The sites for this co-operation should be of globally objectively recognized significance and in imminent danger of disintegration or collapsing. The cultural asset need not necessarily be inscribed on the World Heritage List, but its inclusion may be a factor to be considered in appreciating the value of the cultural heritage concerned. In addition to the budgetary provision and availability of the funds, the priority given by the beneficiary government and the compatibility with Japanese foreign policy and geographical distribution of the projects already in progress are considered in the identification of projects. The collaboration/participation of Japanese experts shall be considered favourably in the spirit of technical co-operation for development.

Commitment of the beneficiary State

The spirit of co-operation under this Funds-in-Trust is to support the efforts made by national authorities in the field of preservation of the cultural heritage, especially through provision of technical assistance, so that this task can be taken in charge entirely by the beneficiary state in future. In this regard, a firm commitment by the beneficiary country to the task through its participation and co-operation is an essential element for the success of the project undertaken.

The world’s cultural heritage sites, including those presented here, show our cultural diversity through their different artistic styles and social functions. Thus, they provide us with opportunities to appreciate different cultural traditions while at the same time representing common human aspirations. Cultural heritage, an expression of human existence, continually inspires us. Therefore, responsibility for its protection should be shared by us all, in order that it can serve as a bridge between the past, present and future.

Four decades after the first International Safeguarding Campaign launched by UNESCO to save the monuments and sites of Nubia, the international community is now fully aware of the importance of the world cultural heritage and of its responsibility towards this common heritage of humanity.

Although the international community has continued to respond to UNESCO’s appeals, more pressing economic needs have often relegated culture to second place. Yet cultural heritage can be a major opportunity for economic development, as has been shown in Cambodia, and it needs to be properly managed according to integrated plans. The cultural heritage can also play an important role in enhancing people’s awareness of their own cultural identities, especially for those living in post-conflict situations.

UNESCO is grateful to the Japanese Government for its continuing support for the Organization’s endeavours in the field of culture, notably through the generous contribution it has made through this Funds-in-Trust to saving numerous cultural heritage sites all over the world. The greater part of this co-operation has been carried out in Asia, though projects have also been successfully implemented in Europe (Romania), Africa (Benin and Egypt), and Latin America (Peru and Chile).

Given the universal significance of cultural heritage preservation, it is UNESCO’s ardent wish that such cooperation should in future also be carried out elsewhere in the world at other cultural sites whose preservation is essential for future generations.

We would like to take this opportunity to express our thanks to all those who provided their technical assistance for the preparation of this promotional publication, particularly the Asia/Pacific Cultural Centre for UNESCO (ACCU). 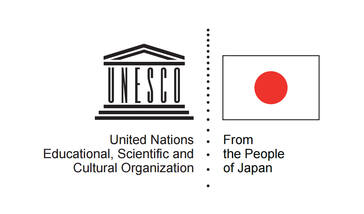