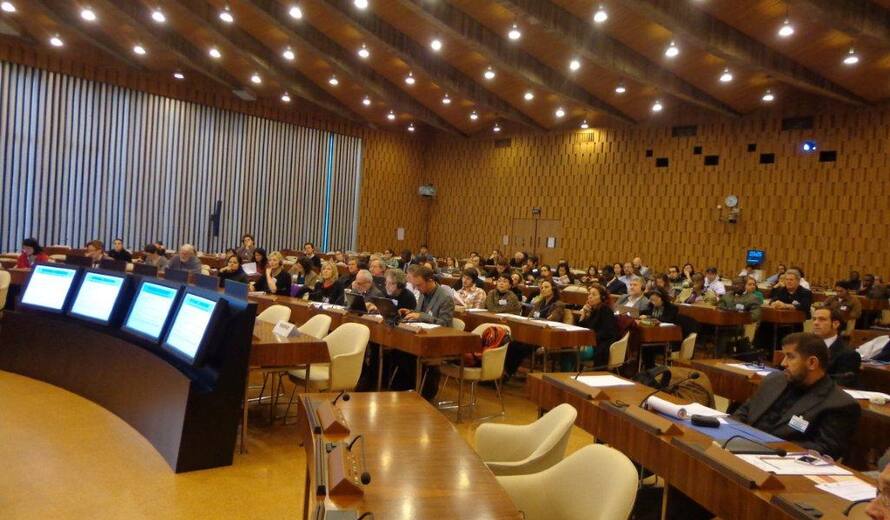 A session of the colloquium © UNESCO / K. Monteil

Within framework of the World Heritage Earthen Architecture Programme (WHEAP), an international colloquium on the conservation of earthen architecture was organized at UNESCO Headquarters in Paris, in partnership with CRAterre-ENSAG, on 17 and 18 December 2012.

This conference, which brought together 240 participants, including experts, professionals and students, was the first international event on earthen architecture in the context of World Heritage. Held at the midpoint of the WHEAP programme (2007-2017), it offered a critical look at the progress and achievements of the WHEAP programme and presented the diversity of earthen architecture on the World Heritage List.

“Apart from the fruitful exchanges among experts, the increased knowledge and reinforcement of our network, it is my hope that this meeting will provide guidance for World Heritage earthen architecture and the sustainable development of its communities around the world,” said Mr. Francesco Bandarin, UNESCO Assistant Director for Culture during his opening speech.

Mr. Lazare Eloundou, Head of the Africa Unit of the World Heritage Centre, UNESCO, emphasized that: “It is important to find a common position on how to go about the future of earthen architecture on the World Heritage List because it is part of the intangible heritage, part of cultures' beliefs systems and part of the way people built their environment. This is a very fragile material so it is important to discuss an integrated approach on how to deal with the conservation because this material continues to be used even today in modern construction.”

Highlights of the conference

The meeting was marked by the presence of 40 experts from all regions of the world, from institutions like the Aga Khan Trust For Culture, the World Monuments Fund and the Getty Conservation Institute, who were able to share their research in the areas of prevention and conservation of World Heritage earthen architecture.

It should be noted that an important role was given to site managers in the panel presentations, which allowed various field experiences around the earthen architecture to be put forward.
Two exhibitions “20 years of contribution to the World Heritage” and “Women Builders of Africa: Perspectives in Burkina Faso and Niger”, made by CRAterre ENSAG and Bâtir et Développer, showcased a concrete demonstration of the progress achieved since the WHEAP programme's inception in 2007.

Experts in general emphasized the importance of earthen architecture in development issues. Mr. Eloundou pointed out how “more than 1/3 of the world population lives in houses built from the earth material and this material is at the heart of sustainable development issues.” But this type of housing is increasingly neglected.

UNESCO Assistant Director for Culture, Mr Bandarin, noted that "This colloquium enabled us to prepare a road map for the future of World Heritage earthen architecture conservation.”