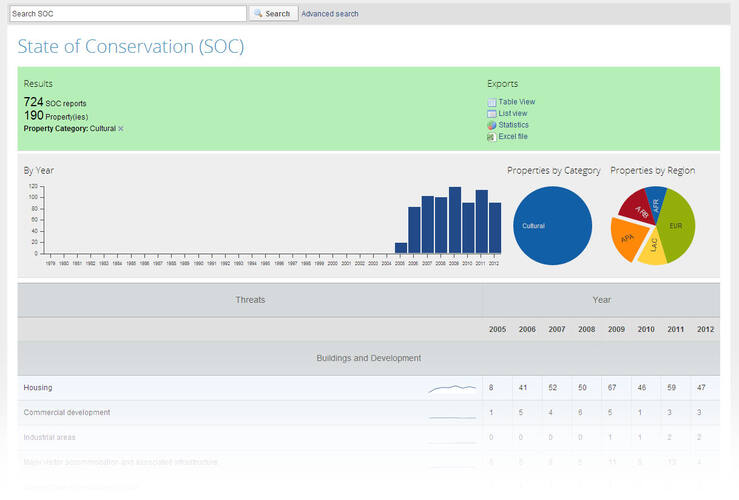 In the 40 years since the adoption of the Convention, thousands of such SOC reports have been prepared by the UNESCO Secretariat and the Advisory Bodies, which represents an exceptional and extensive amount of documentation on various conservation issues. It is one of the most comprehensive monitoring systems of any of the international conventions, involving a global network of nearly 1 000 sites.

In addition to its main purpose in terms of monitoring the state of conservation of properties, this new tool also highly contributes to the institutional memory of the World Heritage Convention and facilitates well-informed and consistent decision-making.

Finally, it will also help all interested users to conduct comprehensive analyses of the threats affecting the properties and their evolution over time.  These analyses will help identify generic threats and potential trends, which will assist States Parties in improving mitigation measures to better protect their heritage.

3.Takes note of the statistical analysis and encourages the World Heritage Centre to continue with the production of such informative data, including regional analyses;

4.Also takes note of the completion of the independent review process on extractive industries and World Heritage properties as a contribution to the Policy Guidelines development and invites the World Heritage Centre to disseminate this review as widely as possible;

5.Requests States Parties to make every endeavor to take into consideration disaster risks, including from human-induced hazards, in the management plans and systems for the World Heritage properties located in their territories;

6.Also requests the World Heritage Centre, with the support of the Advisory Bodies, to continue working with global and regional institutions involved in disaster risk management, with an aim to mainstream a concern for heritage within their policies and programmes as well as in UN-led processes such as the Post-Disaster-Needs-Assessment (PDNA);

7.Further takes note of the information provided regarding the recognition for the protectors of World Heritage properties in conflict and post-conflict zones, including through the use of blue/green berets or other appropriate insignia;

8.Takes note furthermore of the correspondence process in place to increase dialogue between the States Parties, the World Heritage Centre and the Advisory Bodies regarding conservation issues at World Heritage properties;

10.  Expresses its concern with regard to the state of conservation of World Heritage property of “Archaeological Areas of Pompei, Herculaneum and Torre Annuziata” and urges the State Party of Italy to intensify its efforts towards implementing the Committee’s decision taken at its 35th session (UNESCO, 2011);

11.  Extends its sympathy to the victims of the earthquake in northern Italy; also encourages the State Party of Italy to continue its important efforts for the assessment of the damage occurred and for the planning and implementation of the necessary remedial measures, including with a view to strengthening the overall resilience of the three properties in the future against all possible hazards; and requests furthermore the State Party of Italy to provide to the World Heritage Centre updated information on the situation and to coordinate with the World Heritage Centre and the Advisory Bodies possible initiatives for the recovery and restoration of the three affected properties;