World Bank and UNESCO: Expanding Opportunities for Collaboration on Culture and Sustainable Development 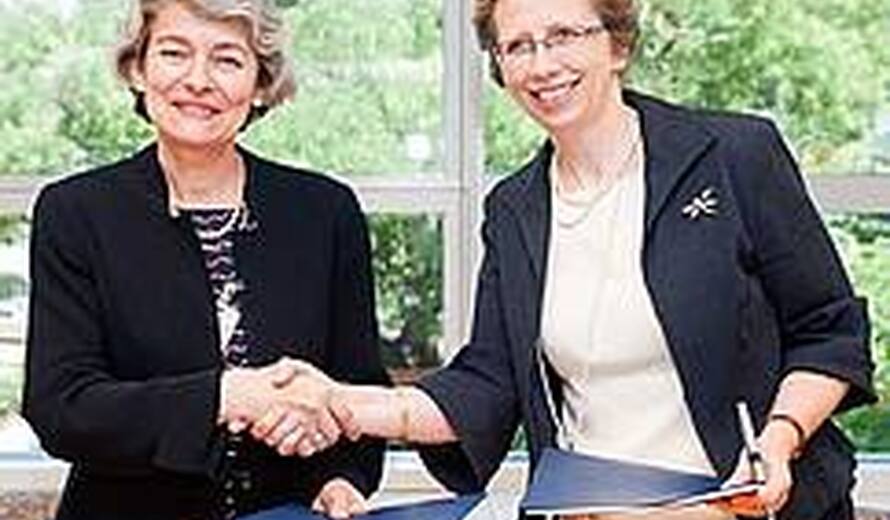 UNESCO and the World Bank have cooperated informally over the past decades, in particular on conservation efforts in the World Heritage sites. Today the two organizations signed a Memorandum of Understanding formalizing that on-going collaboration and expanding it to encompass a larger strategic scope.

Thanks to this Memorandum of Understanding (MoU), signed by Inger Andersen, World Bank Vice President, Sustainable Development and Irina Bokova, Director-General of UNESCO, concrete joint initiatives have been identified in an effort to pursue common objectives of the two organizations in the areas of culture and sustainable development.

“By joining forces, UNESCO and the World Bank can provide very positive input for the improvement of aid effectiveness, and make the most of culture as a motor for social development and poverty alleviation, through employment and job creation. We believe also we can give impetus and concrete follow up to the recent resolution of the United Nations General Assembly which underlined the links between culture and development,” said Irina Bokova, Director-General of UNESCO.

The MoU is part of UNESCO’s efforts to promote the culture and development agenda, and its efforts to support countries in achieving the Millennium Development Goals (MDGs). For the World Bank, signing the MoU communicates a clear message that it attaches increasing importance to cultural values in its operations and recognizes the positive role of culture in development.

“This Memorandum of Understanding formalizes the ongoing cooperation between our organizations on culture and sustainable development.  Future collaboration between UNESCO and the World Bank will focus in particular on urban development for cultural heritage and the economics of culture, but will also extend to cultural diversity and social inclusion,” said Inger Andersen, Vice President, Sustainable Development, The World Bank.

The overall objective of the MoU is to provide a framework for technical cooperation between UNESCO and the World Bank in the following areas:

The agreement comes at a very opportune time. As the global community is preparing to evaluate in 2015 the attainment of the MDGs and draw lessons for the future of international development, this partnership will bring a great value to the debate, especially through joint cooperative initiatives.

UNESCO/World Bank Conference on the Economics of Culture

In 1991, UNESCO and the World Bank, in partnership with the Government of Italy, organized a conference on culture and development in Florence, Italy entitled: “Culture Counts.” Within the scope of this MoU, UNESCO and the World Bank plan to organize a follow-up conference on the Economics of Culture in 2012 with the aim of highlighting the links between culture and poverty eradication, as well as the contribution of the culture sector to the global development agenda.