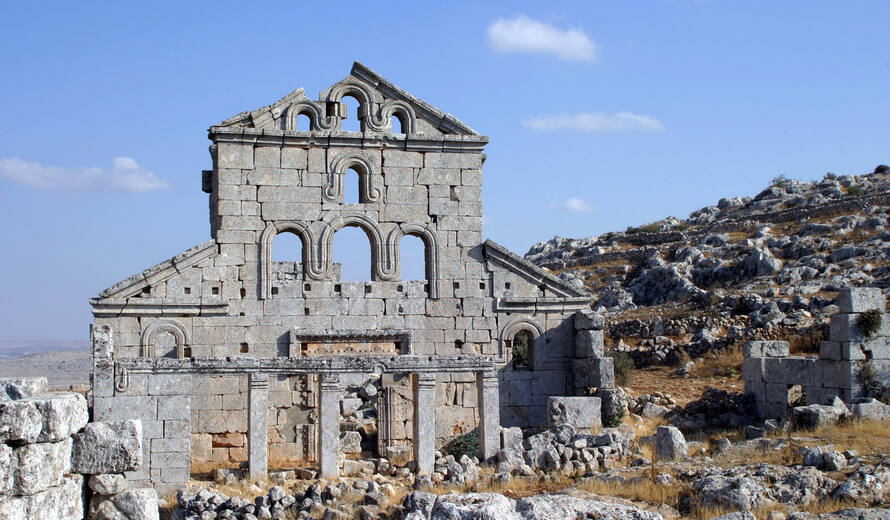 Ancient villages of Northern Syria (Syrian Arab Republic). Some 40 villages grouped in eight parks situated in north-western Syria provide remarkable testimony to rural life in late Antiquity and during the Byzantine period. Abandoned in the 8th to 10th centuries, the villages, which date from the 1st to 7th centuries, feature a remarkably well preserved landscape and the architectural remains of dwellings, pagan temples, churches, cisterns, bathhouses etc. The relict cultural landscape of the villages also constitutes an important illustration of the transition from the ancient pagan world of the Roman Empire to Byzantine Christianity. Vestiges illustrating hydraulic techniques, protective walls and Roman agricultural plot plans furthermore offer testimony to the inhabitants’ mastery of agricultural production.

The Cultural Sites of Al Ain (Hafit, Hili, Bidaa Bint Saud and Oases Areas, United Arab Emirates) constitute a serial property that testifies to sedentary human occupation of a desert region since the Neolithic period with vestiges of many prehistoric cultures. Remarkable vestiges in the property include circular stone tombs (ca 2500 B.C.), wells and a wide range of adobe constructions: residential buildings, towers, palaces and administrative buildings. Hili moreover features one of the oldest examples of the sophisticated aflaj irrigation system which dates back to the Iron Age. The property provides important testimony to the transition of cultures in the region from hunting and gathering to sedentarization.

The Persian Garden (Iran). The property includes nine gardens in as many provinces. They exemplify the diversity of Persian garden designs that evolved and adapted to different climate conditions while retaining principles that have their roots in the times of Cyrus the Great, 6th century BC. Always divided into four sectors, with water playing an important role for both irrigation and ornamentation, the Persian garden was conceived to symbolize Eden and the four Zoroastrian elements of sky, earth, water and plants. These gardens, dating back to different periods since the 6th century BC, also feature buildings, pavilions and walls, as well as sophisticated irrigation systems. They have influenced the art of garden design as far as India and Spain.

The Cultural Landscape of the Serra de Tramuntana (Spain) located on a sheer-sided mountain range parallel to the north-western coast of the island of Mallorca. Millennia of agriculture in an environment with scarce resources has transformed the terrain and displays an articulated network of devices for the management of water revolving around farming units of feudal origins. The landscape is marked by agricultural terraces and inter-connected water works – including water mills - as well as dry stone constructions and farms.

Pile Dwellings around the Alps (Switzerland, Austria, France, Germany, Italy, Slovenia).   This serial property of 111 small individual sites encompasses the remains of prehistoric pile-dwelling (or stilt house) settlements in and around the Alps built from around 5000 to 500 B.C. on the edges of lakes, rivers or wetlands. Excavations, only conducted in some of the sites, have yielded evidence that provides insight into life in prehistoric times during the Neolithic and Bronze Age in Alpine Europe and the way communities interacted with their environment. Fifty-six of the sites are located in Switzerland. The settlements are a unique group of exceptionally well-preserved and culturally rich archaeological sites, which constitute one of the most important sources for the study of early agrarian societies in the region.

Selimiye Mosque and its Social Complex (Turkey). The square Mosque with its single great dome and four slender minarets, dominates the skyline of the former Ottoman capital of Edirne. Sinan, the most famous of Ottoman architects in the 16th century, considered the complex, which includes madrasas (Islamic schools), a covered market, clock house, outer courtyard and library, to be his best work. The interior decoration using Iznik tiles from the peak period of their production testifies to an art form that remains unsurpassed in this material. The complex is considered to be the most harmonious expression ever achieved of the Ottoman külliye, a group of buildings constructed around a mosque and managed as a single institution.

A total of 35 nominations, including natural, cultural and mixed properties are being reviewed by the Committee, which is holding its 35th session at UNESCO Headquarters in Paris.