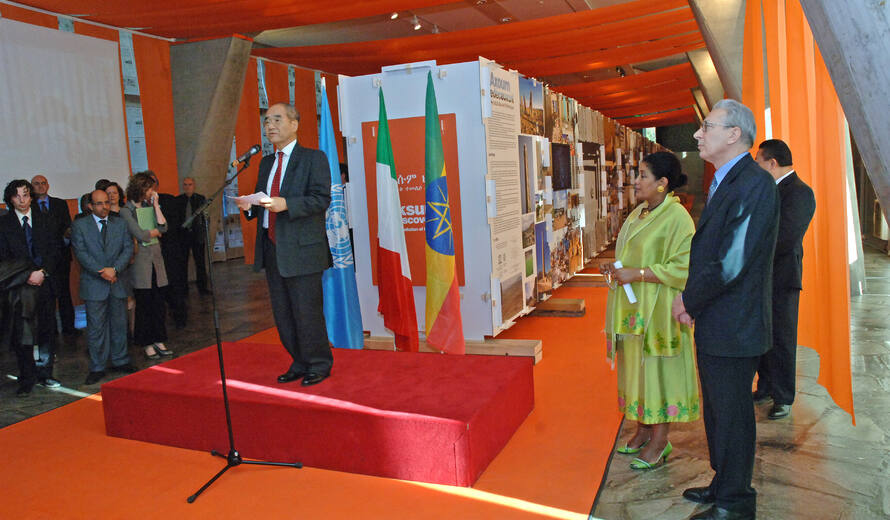 On 23 April 2009, the Director-General of UNESCO, Mr Koïchiro Matsuura inaugurated an exhibition at UNESCO Headquarters celebrating the successful reinstallation of the Aksum Obelisk in Ethiopia. Entitled 'Aksum Rediscovered: The Reinstallation of the Aksum Obelisk', the exhibition features films and photographs documenting key moments of the re-installation built around a structure which recreates the exact volume of the 23.4 metre high stele. Also present were Madam Tadelech Haile-Mikael, Ambassador and Permanent Delegate of Ethiopia to UNESCO and Mr Giuseppe Moscato, Ambassador and Permanent of Italy to UNESCO.

In his opening remarks, Mr Matsuura said that "the exhibition conveys a sense of the spontaneous, joyous festivities that have marked all the phases of the operations in Ethiopia: from the arrival by plane of the three sections of the obelisk in 2005, to the inauguration ceremony in Aksum on 4 September 2008. Today we are delighted to celebrate another milestone: the successful completion of this remarkable adventure. The specially designed metal support structure that obscured the obelisk over the past year has been dismantled at last. Thanks to the hard work, dedication and talents of UNESCO staff and experts, the 152-ton obelisk now proudly stands unencumbered on the Aksum World Heritage site as an archaeological reminder of Ethiopia's glorious past and a testimony to human creativity."

Continuing, Mr Matsuura said that while the long and complex operation constituted "an extraordinary and unprecedented technical achievement...the project also has a tremendous symbolic significance. Indeed, it is my hope that the Aksum project will be remembered above all as a convincing demonstration of the power of dialogue, international cooperation, and culture in development strategies."

The Director-General paid tribute to the Governments of Ethiopia and Italy, without whom the project could not have been undertaken and concluded by saying that "For all Ethiopians, the Aksum Obelisk is much more than an archaeological vestige of a bygone era: it stands as a potent and vibrant symbol of their national heritage and pride. At the present time, when international leaders and decision makers are searching for sustainable solutions to the crises that are wreaking havoc around the world, and whose consequences may be particularly dire for the peoples of the South, success stories such as the Aksum project provide convincing arguments for integrating culture into development strategies with a view to ensuring a brighter future for all peoples of the planet."