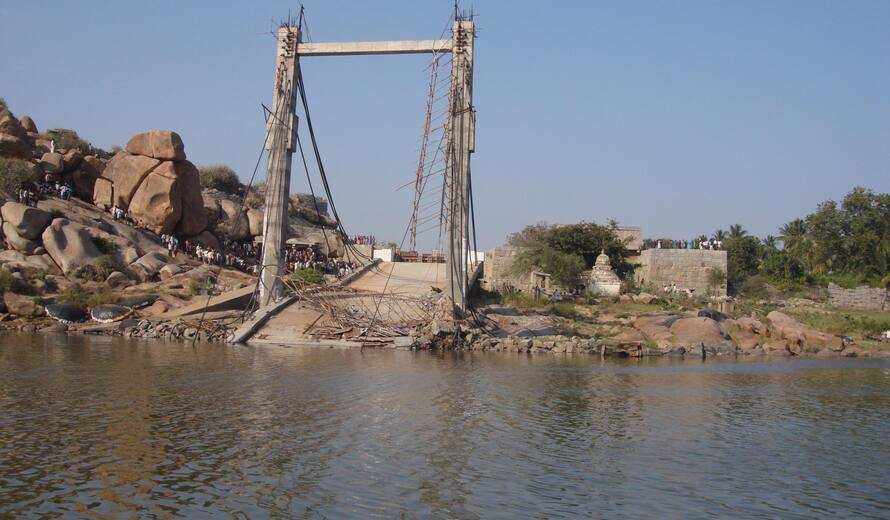 On 22 January 2009, the Anegundi Bridge at the World Heritage Group of Monuments at Hampi collapsed, killing eight construction workers. The unfinished bridge over the Tungabhadra River gave way under the weight of the additional concrete used to complete its construction, only weeks after resumption of the works which had been halted over 9 years ago.

The Group of Monuments at Hampi was inscribed on the List of World Heritage in Danger in 1999 in part because of the construction of two bridges, one of them the Anegundi Bridge. This suspension bridge, only partially completed at the time, dominated the natural environment in the core archaeological area of the site. It threatened the integrity of the World Heritage site due to the visual impact of the bridge as well as through the heavy vehicular traffic in the protected area that the bridge would engender.

UNESCO and ICOMOS had recommended in 2000 that an alternative site for the bridge be identified during the elaboration of the site Master Plan. In recognition of the need to complete the bridge as a temporary means to facilitate the river crossing, efforts to mitigate the threats to the site through constructing a bypass road and other control measures were proposed and executed between 2003 and 2006.

In 2006, the World Heritage Committee removed Hampi from the Danger List requesting the State Party, at the same time to "reconsider and adapt the design and dimensions of the Anegundi Bridge... respecting the visual integrity of the property" and to address the long-term concerns over the impact of the bridge on traffic and undesirable construction activities.

The spectacular site of Hampi was inscribed on the World Heritage List in 1986 as a testimony of the last capital of the great Hindu Kingdom of Vijayanagar. The vestiges of the fabulous temples and palaces, as well as the galleries of markets which once won the admiration of travellers between the 14th and 16th centuries, remain to this day in the awesome natural setting characterized by gigantic granite boulders and the Tungabhadra River.

The staff of the UNESCO World Heritage Centre express their condolences for the lives lost in this tragic event.