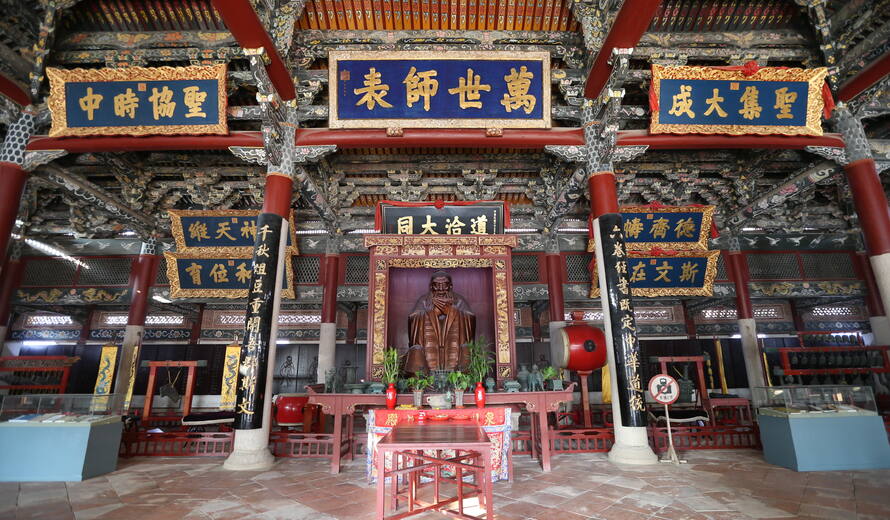 China, Quanzhou: Emporium of the World in Song-Yuan China
The serial site of Quanzhou illustrates the city’s vibrancy as a maritime emporium during the Song and Yuan periods (10th - 14th centuries AD) and its interconnection with the Chinese hinterland. Quanzhou thrived during a highly significant period for maritime trade in Asia. The site encompasses religious buildings, including the 11th century AD Qingjing Mosque, one of the earliest Islamic edifices in China, Islamic tombs, and a wide range of archaeological remains: administrative buildings, stone docks that were important for commerce and defence, sites of ceramic and iron production, elements of the city’s transportation network, ancient bridges, pagodas, and inscriptions. Known as Zayton in Arabic and western texts of the 10th to 14th centuries AD.

India, Kakatiya Rudreshwara (Ramappa) Temple, Telangana
Rudreshwara, popularly known as Ramappa Temple, is located in the village of Palampet approximately 200km north-east of Hyderabad, in the State of Telangana. It is the main Shiva temple in a walled complex built during the Kakatiyan period (1123–1323 CE) under rulers Rudradeva and Recharla Rudra. Construction of the sandstone temple began in 1213 CE and is believed to have continued over some 40 years. The building features decorated beams and pillars of carved granite and dolerite with a distinctive and pyramidal Vimana (horizontally stepped tower) made of lightweight porous bricks, so-called ‘floating bricks’, which reduced the weight of the roof structures. The temple’s sculptures of high artistic quality illustrate regional dance customs and Kakatiyan culture. Located at the foothills of a forested area and amidst agricultural fields, close to the shores of the Ramappa Cheruvu, a Kakatiya-built water reservoir, the choice of setting for the edifice followed the ideology and practice sanctioned in dharmic texts that temples are to be constructed to form an integral part of a natural setting, including hills, forests, springs, streams, lakes, catchment areas, and agricultural lands.

Islamic Republic of Iran, Trans-Iranian Railway
The Trans-Iranian Railway connects the Caspian Sea in the northeast with the Persian Gulf in the southwest crossing two mountain ranges as well as rivers, highlands, forests and plains, and four different climatic areas. Started in 1927 and completed in 1938, the 1,394-kilometre-long railway was designed and executed in a successful collaboration between the Iranian government and 43 construction contractors from many countries. The railway is notable for its scale and the engineering works it required to overcome steep routes and other difficulties. Its construction involved extensive mountain cutting in some areas, while the rugged terrain in others dictated the construction of 174 large bridges, 186 small bridges and 224 tunnels, including 11 spiral tunnels. Unlike most early railway projects, construction of the Trans-Iranian Railway was funded by national taxes to avoid foreign investment and control.

Spain, Paseo del Prado and Buen Retiro, a landscape of Arts and Sciences
Located at the urban heart of Madrid, the 200-hectare cultural landscape evolved since the creation of the tree-lined Paseo del Prado avenue, a prototype of the Hispanic alameda, in the 16th century. The avenue features major fountains, notably the Fuente de Cibeles and the Fuente de Neptuno, and the Plaza de Cibeles, an iconic symbol of the city, surrounded by prestigious buildings. The site embodies a new idea of urban space and development from the enlightened absolutist period of the 18th century. Buildings dedicated to the arts and sciences join others in the site that are devoted to industry, healthcare and research. Collectively, they illustrate the aspiration for a utopian society during the height of the Spanish Empire. The 120-hectare Jardines del Buen Retiro (Garden of Pleasant Retreat), a remnant of the 17th-century Buen Retiro Palace, constitutes the largest part of the property displaying different gardening styles from the 19th century to the present. The site also houses the terraced Royal Botanical Garden and the largely residential neighbourhood of Barrio Jerónimos with its rich variety of 19th- and 20th-century buildings that include cultural venues.