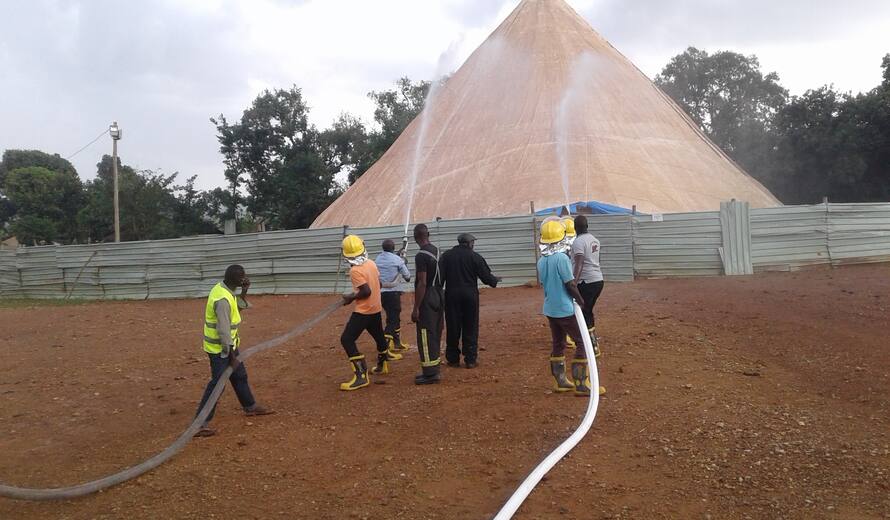 UNESCO’s Heritage Emergency Fund (HEF) supported an on-site firefighting training on 7 December 2020 for local communities and site management at the Tombs of Buganda Kings at Kasubi World Heritage site in Uganda organized by the Ministry of Tourism, Wildlife and Antiquities Department of Museums and Monuments.

The training is part of an ongoing HEF project for “Post-fire emergency assistance for the World Heritage property of the Tombs of Buganda Kings at Kasubi, Uganda” following a fire that broke out on 5 June 2020. The project is supporting the development of a disaster risk management plan for the site and providing some of the essential equipment required for a comprehensive firefighting system at the site. The project complements another ongoing UNESCO project for post-fire reconstruction from a 2010 fire at the Kasubi Tombs site that is funded by the Government of Japan, and has focused on reconstruction of the main building destroyed in the 2010 fire. The Japan funded project is also providing the majority of the budget for the procurement and installation of the firefighting equipment for the site, a site management office and interpretation centre, as well as publications on the reconstruction process together with a thatching guide and tour guide training, etc. In addition, following the June 2020 fire, the UNESCO Regional Office for Eastern Africa purchased fire extinguishers and other minor emergency equipment, some of which was used for the on-site training led by the local fire department.

“At the beginning of the training, the existing firefighting equipment on the site was arranged and inspected,” said Mr. Dennis Lukwago, site manager of the Tombs of Buganda Kings at Kasubi World Heritage property. “The participants were shown vulnerable areas of the site and discussed aspects that could pose a risk to site assets. They were also assembled and trained on how to use firefighting equipment to extinguish fires, especially with fire truck hoses,” he added.

“We are grateful for this support from the UNESCO Heritage Emergency Fund, which has provided critical financial and technical support for our World Heritage site in Danger,” said Ms. Rose Mwanja, Commissioner for Museums and Monuments.

The Donors to the UNESCO Heritage Emergency Fund include the Qatar Fund for Development, the Kingdom of Norway, the Government of Canada, ANA Holdings Inc., the Principality of Monaco, the Kingdom of the Netherlands, the Republic of Estonia, the Grand Duchy of Luxembourg, the Slovak Republic, the Principality of Andorra, and the Republic of Serbia.

For more information on the UNESCO Heritage Emergency Funds:  https://en.unesco.org/themes/protecting-our-heritage-and-fostering-creativity/emergencyfund2