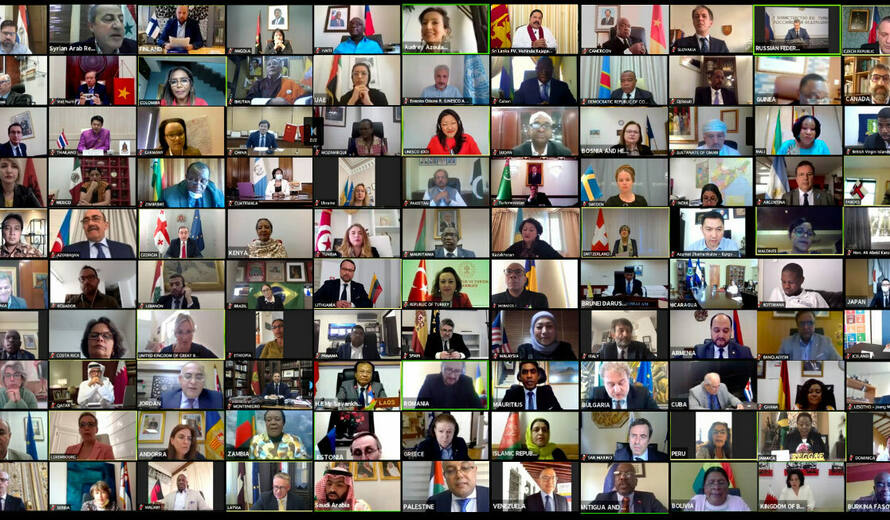 Over 130 Ministers and Vice-Ministers of Culture joined the online meeting convened by UNESCO to discuss actions to bolster the cultural sector, which is facing unprecedented upheaval due to the COVID-19 pandemic.

The ministers spoke of the direct effects of the current crisis on tourism, museums, cultural production and artists, as well as the measures that they have taken to mitigate the impact of the crisis. They reaffirmed their commitment to intergovernmental dialogue and international solidarity in order to strengthen and unite their efforts.

Opening the debate, the Director-General of UNESCO, Audrey Azoulay, reminded participants that “We need culture, so we need to help it to sustain this shock. We must assess the impact of the crisis, launch a joint reflection and coordinated initiatives. UNESCO fully intends to play its role in this process, in line with its mandate.”

Ministers highlighted the social and economic benefits of the culture sector in their countries, and agreed on the urgent need to invest in the sector during, and following, the crisis. The mobility restrictions and containment measures that governments have been forced to adopt due to the pandemic have drastically curbed access to culture in the short term and – if action is not taken – could weaken the entire cultural ecosystem for generations to come.

The ripple effect of COVID-19 on culture

A large majority of countries cited the closures of their World Heritage sites and cultural institutions and the ripple effect this is having within their countries. Indeed, to date, 90% of countries have closed or partially closed their UNESCO World Heritage sites and 128 countries have closed their cultural institutions. In addition to these closures, traditional festivals and a wide array of other events have been cancelled, impacting the cultural life of communities and the income of creative professionals, whose work is often seasonal.

In fact, Ministers repeatedly noted that artists and creative professionals have been among the hardest hit in this crisis due to the fragility of the sector, with many being self-employed, employed in small and medium-sized enterprises and, in some cases, working in the informal sector. During the meeting, many ministers highlighted that the collapse of cultural life and production was having a dire impact on the tourism sector – which, in some countries, corresponds to more than half of the country’s economic activity. Recent figures from the World Travel and Tourism Council show that 75 million jobs in the tourism sector are under threat.

Culture is a vital part of the solution

A succession of ministers paid tribute to their national artists and all workers in the cultural sector, including heritage site managers, for their talents and their role in ensuring access to culture in these times of confinement, as well as their commitment to raising awareness about the pandemic through their activities. Thanks to online platforms, access to culture has been ensured in many parts of the world, including through virtual museums, galleries and libraries. Countless musicians, dancers, visual artists and writers have made their works accessible online. Many such initiatives are also ensuring the continuity of arts education activities. However, culture is not only been disseminated via digital platforms, as many parts of the world do not have the relevant infrastructure. Cooperation with television stations, radio and the press are also ensuring that people can connect with culture as a source of comfort, wellbeing and togetherness during these traumatic times.

To address the fact that the cultural sector has been one of the first to be affected by this crisis, and yet often the last to receive budgetary support, many ministers highlighted the emergency funding packages that they have put in place in their countries to safeguard the livelihoods of artists, artisans and creative professionals in the short term. Some of these include commissioning new works, often adapted to the new reality of the digital environment, to provide a continued income for individuals and access to culture for society as a whole.

Whilst countries are at different stages of the COVID-19 pandemic, many have already begun to undertake impact assessments to address not only the short-term impact but also to devise strategies in the longer term. For a great number of governments, the expansion of digital technologies will be a major part of the strategy. The UAE noted that “we must begin discussions on a holistic digital cultural economy and plan to support culture that does not easily translate in the virtual world.” Yet, as many Ministers pointed out, culture is also a collective experience of our shared humanity and it will be important to revitalise human contact when it is safe to do so.

Building a broad coalition to support the cultural ecosystem

The massive participation in the meeting itself was a testament to the need for international solidarity at this time, a sentiment that was echoed repeatedly by the Ministers. For example, China, the first country to be affected by COVID-19, noted that “culture can - and should - bring us together, boost international commitment and restore hope and confidence.” Several other Member States called for a strengthened platform for dialogue to share good practices among states. Others highlighted the need for international financial mechanisms to support the countries least able to reinforce their cultural sectors. Even the enhancement of UNESCO normative instruments was cited as a long-term goal, as the crisis has brought into stark relief the importance of culture for society, as well as its vulnerability. As the Czech Republic underscored, “Culture is an essential part of society, it is not a luxury.”

Many Ministers noted that the impact of the crisis on the cultural sector is not to be understated and the world will look different after the lifting of these exceptional measures. Sweden implored fellow ministers to “join our efforts to defend open and democratic societies where creators can work under free, fair and safe conditions and where artistic freedom is protected and promoted”. Indeed, many countries said that in the long term we must adapt to a “new normal”, with countries such as Mali saying that “this crisis is an opportunity to develop a global and strategic reflection on culture.” Quite simply, stated Mexico, “culture has always saved us in the past and this time will not be any different”.

Closing the debate, the Assistant Director-General for Culture, Ernesto Ottone R. recalled that “there can be no future without culture”. He concluded that, “This meeting has shown your great commitment and UNESCO will continue to support you. We cannot reverse the progress seen over the past few years in the cultural sector. It through culture that we will forge our collective resilience and it is culture that will bring us closer together.”