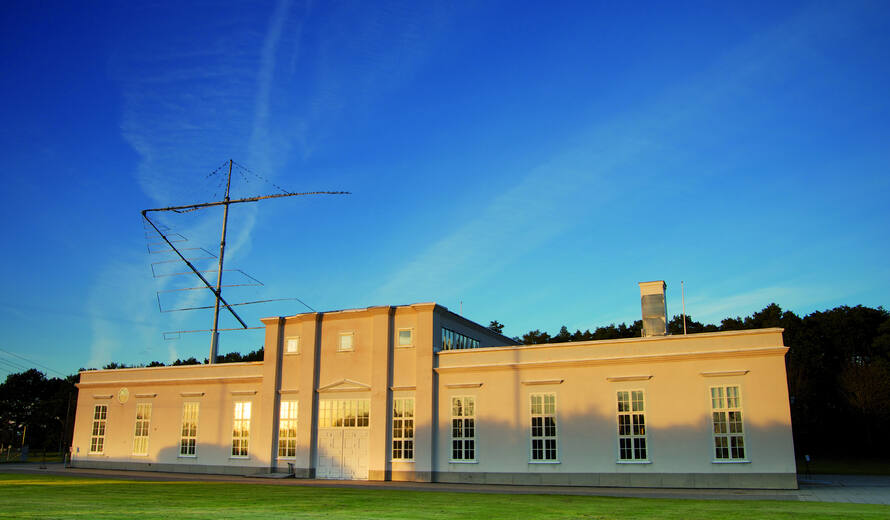 Today is World Radio Day, proclaimed in 2011 by Member States of UNESCO, and adopted by the United Nations General Assembly in 2012 as an International Day to highlight the importance of radio.

Radio is a powerful medium for celebrating humanity in all its diversity. At the global level, radio remains the most widely consumed medium. This unique ability to reach out to the widest audience means radio can shape a society’s experience and stand as an arena for all voices to speak out, be represented and heard.

To commemorate World Radio Day this year, the Municipality of Varberg in southern Sweden chose Aleksandra Stratimirovic´s Transmission as an art installation to be inaugurated at Grimeton Radio Station, Varberg (Sweden). The choice was made through a jury selection with art experts together with representatives from World Heritage Grimeton.

This art installation consists of two laser projectors placed on one of the radio station's antenna towers; the station's communications will be visible through the laser beams. Patterns in the shape of waves and frequencies convey messages in slow, rhythmic sequences, pulsating at intervals that mimic the Morse alphabet.

“This transmission has the ability to visualize Grimeton´s exciting history and to make visible the invisible. It will be a monument to communication and to the values of the site,” said Bodil Hedberg Petersson, art coordinator at the Municipality of Varberg.

The light becomes letters that then form words, conveying messages built on UNESCO's vision of peace and human equality: peace, friendship, freedom, equality, life, love. The artwork is intended to be interactive and bring awareness of World Heritage preservation.

“The choice of technology means special demands on both artist and our organization. It’s not the easiest solution, but an exciting challenge which gives the project an extra dimension,” said Camilla Lugnet, Managing Director at the Foundation World Heritage Grimeton.

Inscribed on the World Heritage List in 2004, Grimeton Radio Station, Varberg is an outstanding example of the development of telecommunications and the only surviving example of a major transmitting station based on pre-electronic technology. Built from 1922 to 1924, it is an exceptionally well-preserved monument to early wireless transatlantic communication.