Cultural Days in the Royal Palaces of Abomey (Benin) 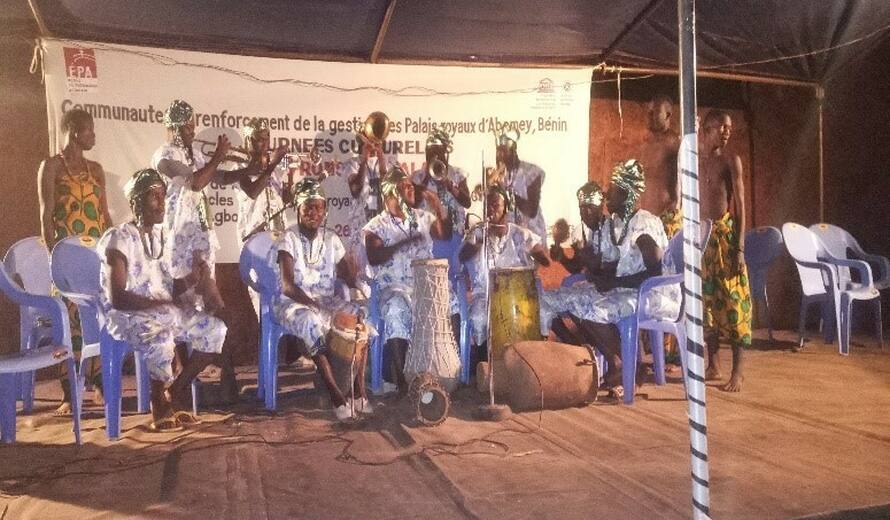 Launched in July 2017 with financial support from the Netherlands Funds-in-Trust, the “Communities and reinforcement of the management of the Royal Palaces of Abomey World Heritage Site” project, has been successfully concluded with a three-day cultural celebration event, from 27 to 29 December 2018.

During the three days, the Palaces of the Kings Hwégbaja Ghézo, Glélé and Agoli Agbo gathered about 1000 people coming from the local communities of Abomey, as well as the dignitaries of the Royal families (including the chiefs of the 12 lineages of the royal dynasty of Abomey), the local authorities and tourists, who discovered and appreciated the rich traditional cultural practices of the historic capital. In total, 15 artists and groups of artists were involved in the animation of the site inscribed on the World Heritage List since 1985. This confirmed the cultural vivacity of Abomey through its artists and traditional and modern music and dances.

Mr. Toussaint Abbozo, president of A2PRA, concluded: “What we just started can’t stop now. We are going to do what is necessary to reach the objectives. We are aware of the role we have to play and I think EPA and its partners will not be disappointed for the trust they placed in us”.

This also reflects words from Mr. Edmond Moukala, Chief of the Africa Unit of the World Heritage Centre, who stated: “The involvement of local communities is essential for a sustainable management of World Heritage properties”.

This initiative is the first activity of the organization, which was created in March 2018 in the framework of the project which contributed to strengthen the state of conservation of the Royal Palaces of Abomey through enhanced involvement of local communities in the management of the property.