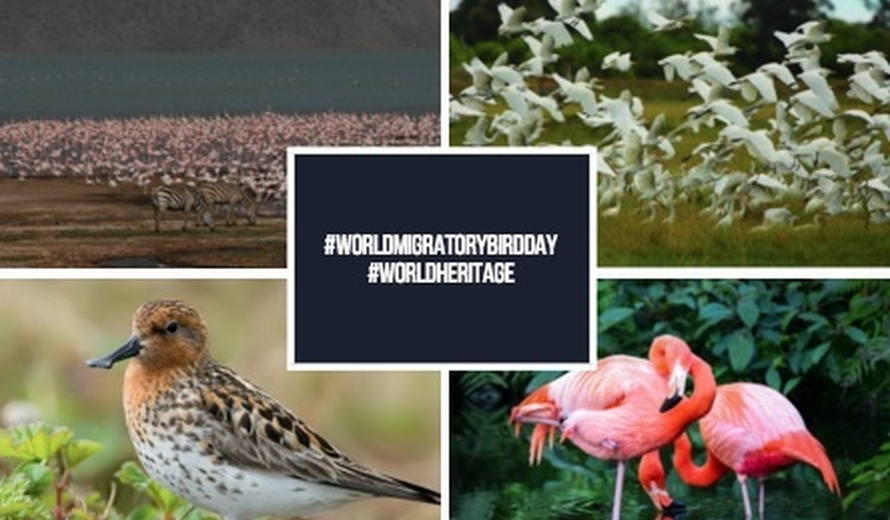 This year’s World Migratory Bird Day is dedicated to the world’s major bird flyways—the flight paths of migratory birds that span continents and oceans. These flyways include World Heritage sites that are key stopover sites for birds, so the effective conservation of these sites are crucial for migratory bird conservation on a global scale.

The three major flyways, shown below, contain critical habitats and refuges vital for migratory birds. A prime example is the East Atlantic Flyway, connecting the Arctic region with the Wadden Sea (an essential staging, moulting and wintering area for millions of migratory birds), Doñana National Park (the wintering site for more than 500,000 water fowl), and Banc d’Arguin National Park (one of the most important zones in the world for nesting birds and Palearctic migratory waders).

Another example is the West Asian – East African Flyway, connecting the Saryarka – Steppe and Lakes of Northern Kazakhstan (a key stopover point for migratory waterbirds on their way from Africa, Europe and South Asia to their breeding places in Western and Eastern Siberia) with the Kenya Lake System in the Great Rift Valley (where billions of birds are found to travel from northern breeding grounds to African wintering places).

While the impact of climate change on migratory birds is difficult to assess, we are already seeing changes that might provide an indication of what the future holds. For example, scientists have observed that some birds that breed in the Arctic are getting smaller because their typical food pattern is disturbed. These birds from the Arctic have to start their migration to the Wadden Sea and Banc d’Arguin National Park with an empty stomach, and thus have smaller chances of survival.

Below are World Heritage sites across the three major flyways containing critical habitats and refuges vital for migratory birds. It is up to us to protect these sites, and therefore protect these fragile species.