Today, for the third time, we celebrate African World Heritage Day. The Day was established to raise awareness of the immense potential of the African cultural and natural heritage. It also aims to alert the world to the vulnerability of this heritage: there are 21 African sites on the List of World Heritage in Danger.

The preservation and enhancement of this heritage are essential factors in sustainable development, the only kind of development capable of meeting the complex challenges that face Africa today and include climate change, the challenge of education and the economy, and rapid urbanization.

Mobilizing local communities, especially young people, around the safeguarding of the heritage, involving them in projects that place value on their cultural identity and natural environment, is one of the best ways of opening up prospects for the future and for development. It is in particular through training and education that this mobilization may eventually prove to be most effective.

This year, it is indeed the young people of Africa who are being honoured on African World Heritage Day. These young people are, we know, one of the continent’s strengths: some 60% of the African population now is under 25 years old; by 2050, Africa will have over one billion young people and children. However, it is a strength that is underutilized: the youth unemployment rate is increasing exponentially - in West Africa and Central Africa it has reached over 60%.

Investing in the safeguarding and enhancement of the heritage can create new education and employment opportunities. Involving communities in local and regional projects helps to stem the rural exodus and migration, and to defuse the sentiments of exclusion and alienation that breed violence and radicalization.

Africa is a priority for UNESCO. For many years now, the Organization has been working closely with the African World Heritage Fund and civil society actors so as to give the magnificent heritage of Africa its due, and to implement durable social and educational policies and promote a culture of peace.

Initiatives have been successful, such as the rehabilitation of the world heritage sites of Timbuktu, and the enhancement of the Virunga National Park in the Democratic Republic of the Congo. The project to rehabilitate Lake Chad, recently launched by UNESCO and its African partners, is part of this same overall approach: by implementing education and training activities, restoring biosphere reserves and enhancing the cultural heritage, the project contributes to acting on the causes of poverty and works in a lasting way for peace and security in the Lake Chad basin region. UNESCO is also active in the Sahel where it is developing educational activities to prevent extremism. Another UNESCO project, designed to create a network of African universities to improve cooperation in heritage conservation, has moreover just been launched in Zimbabwe.

On this African World Heritage Day, UNESCO has the pleasure of joining the celebrations organized specially for the occasion in Mozambique, and thanks all those – governments, institutions, voluntary organizations and local stakeholders – who contribute to the safeguarding and promotion of the African heritage, a heritage that is as rich as it is unique. 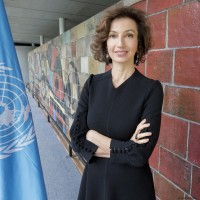 Proclaimed by the 38th session of the General Conference of UNESCO (November 2015), African World Heritage Day (5 May) is an opportunity for people around the world, and particularly Africans, to celebrate the Continent’s unique cultural and natural heritage

What UNESCO does for African Heritage

Reconstructing the cultural heritage of Timbuktu

In collaboration with UNESCO and the Ministry of Culture and Tourism of Mozambique, the African World Heritage Fund is organizing the Third Regional Youth Forum on World Heritage in Africa.

The Forum, which follows the gathering in 2016 for English-speaking countries in Robben Island (South Africa) and the Francophone one in 2017 at Loropeni Ruins (Burkina Faso), will address the African Lusophone Youth. The four-day Forum (30 April-3 May) will consist of fieldwork on the interpretation of the Island of Mozambique World Heritage Site and will conclude with a one-day Seminar (4 May) and the official celebration of the African World Heritage Day (5 May).

Participate and Win a Prize