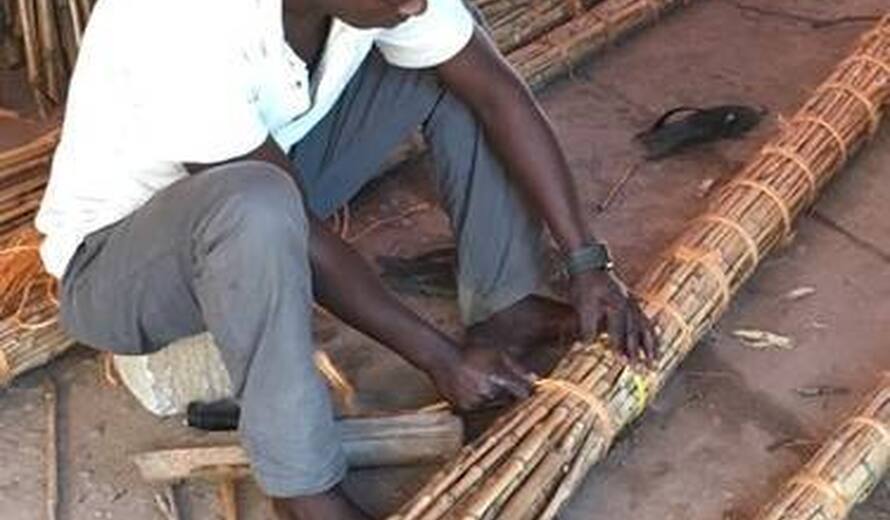 A youth apprentice at Kasubi Tombs measuring the circumference of the reed beams being assembled for the ceiling restoration. (11/09/2017) © UNESCO / K.Monteil | Image Source: K.Monteil

Following the fire that ravaged the Tombs of Buganda Kings at Kasubi World Heritage property in 2010, the site was added to the UNESCO List of World Heritage in Danger.

The local community of the Buganda Kingdom have been working hand-in-hand with the Uganda Ministry of Tourism, Wildlife and Antiquities with support from UNESCO to rebuild the Muzibu-Azaala-Mpanga building, which houses the four tombs of the Buganda Kings and is considered an architectural masterpiece. The training of youth apprentices from the Buganda community is at the core of the reconstruction process. Elders from the Buganda community oversee their work and guide them in traditional building techniques as well as in intangible cultural practices and belief systems.

A 650,000 USD Japanese Funds-in-Trust to UNESCO project was launched in 2013 in order to offer Emergency Assistance to the State Party of Uganda and accompany them in rehabilitating the property in view of its removal from the List of World Heritage in Danger. The project, entitled ‘Technical and financial assistance for the reconstruction of Muzibu-Azaala-Mpanga, architectural masterpiece of the Tombs of Buganda Kings at Kasubi, Uganda, World Heritage property in Danger’, aims to set up an efficient risk prevention scheme at the site with all the equipment needed and support the cost of qualified supervision for the reconstruction of the destroyed roof. The project also aims to provide scientific support to the team in charge of reconstruction to ensure that the outstanding universal values of the site, both tangible and intangible are maintained.

In addition to the Japanese-funded project, the King of the Buganda Kingdom is also investing considerable funds to the rehabilitation of the site. The International Council on Monuments and Sites (ICOMOS), an Advisory Body to the World Heritage Committee, is providing technical advice and guidance towards the reconstruction process as well as in the development of a Master Plan for the conservation and management of the site. CRAterre, the International center for Earthen architecture, has also been a close advisor in the rehabilitation process.

Despite several delays, the reconstruction process is slowly progressing. The local community has continued to rally around the site and their youth apprentices are working hard to learn the traditional building techniques of their forefathers under the watchful eyes of the community elders. Reed by reed and ring by ring, the ceiling is spiralling into shape awaiting the thatching of the roof to begin.