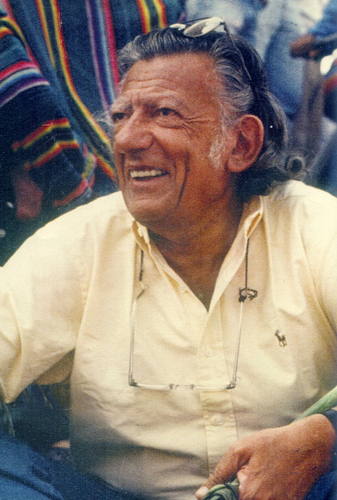 The World Heritage Centre expresses its condolences to the family, friends and colleagues of Sylvio Mutal, who passed away on 18 February 2017.

Mr Mutal had a full and rich career spanning more than 40 years as a Practitioner and Executive Manager of the International Development Cooperation.

After an education in Istanbul (Turkey), London (UK), Leiden (Holland) and Santiago de Chile (Chile) in Engineering and Social Sciences, Sylvio Mutal became a member of the Ministry of Foreign Affairs of Netherlands and, in 1969, of the Department of Economic and Social Affairs (ECOSOC) of UNO in New York. Starting in the 1960s, he worked as a representative and coordinator for the United Nations for Development Programme (UNDP) in developing countries.

In 1976, he began work with UNESCO as the founder and executive director of a regional project of great significance for cultural, urban and environmental heritage in South America and the Caribbean, based at the UNDP office in Lima. Mr Mutal also collaborated in the establishment of about twenty conservation centres in countries such as Brazil, Chile, Colombia, Costa Rica, Cuba, Ecuador, Guatemala, Haiti, Mexico and Peru. In later years his work expanded to Eastern and Central Europe, and Africa and Central Asia, where he carried out missions of the United Nations in cities and World Heritage sites such as Fez, Vilnius, Saint Petersburg, Bucharest, Barcelona, Mozambique Island, Djenne, Gore, Samarkand, and others. He also attended World Heritage expert workshops as well as Committee sessions.

In collaboration with professionals and institutions, Mr Mutal conducted multidisciplinary pre-investment programs and feasibility studies for heritage projects around the world. These were conducted in cooperation with the international banking community, the World Bank and the Inter-American Development Bank, as well public and/or private national and international donor agencies.

Mr Mutal’s advocacy of the economic potential and social dimensions of built heritage—particularly in Historic Cities—has been of paramount importance for innovative approaches to heritage conservation and development. Mr Mutal was also a pioneer in establishing systematic monitoring and evaluation schemes for cultural World Heritage sites, particularly Historic Cities. In 2005, Mutal completed a two-volume publication on 20 World Heritage Cities and their future, and he lectured extensively to young people in order to share practical knowledge and experience with younger generations.