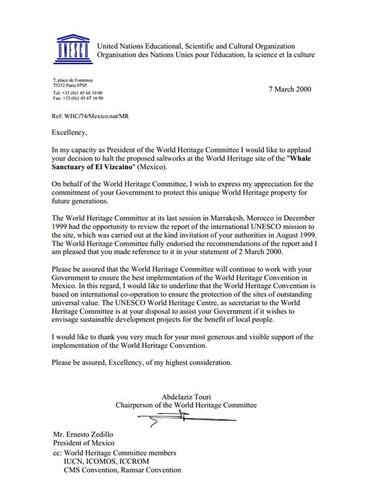 The President of Mexico, Ernesto Zedillo, announced on 2 March 2000 that the development of the proposed saltworks at San Ignacio would not proceed.

The decision was made following the international UNESCO expert mission to the site in August 1999. The results of the mission were presented to, and adopted by, the World Heritage Committee at its twenty-third session held in Marrakesh (Morocco) from 29 November to 4 December 1999.

The experts considered a variety of issues including the management structure, the integrity of the site and its landscape values, the status of the whale population, salt production, sustainable use and tourism. The mission listened to the views of representatives from the Mexican authorities, local and international NGOs, scientists, the salt company and local communities on-site. In adopting the recommendations of the UNESCO mission, the World Heritage Committee emphasized the need to preserve the biodiversity and landscape values of the site.

The Government of Mexico endorsed the conclusions and recommendations of the mission report and stated its intentions to fully take into account the World Heritage values of the site when evaluating any project with potential impacts on the site and its natural resources.

The President of Mexico, in his statement of 2 March 2000, indicated that the World Heritage site, forms a part of the largest reserve in Mexico (the UNESCO Biosphere Reserve of El Vizcaino), which incorporates marine areas and desert ecosystems, and contains endemic species and unique scenic landscapes that should receive the best possible protection: "Its a unique site on a world-wide scale, for species habitat and for its natural beauty, which is also a value to be preserved". …."We Mexicans are generating a new culture of appreciation, respect and care for the natural resources of our nation."