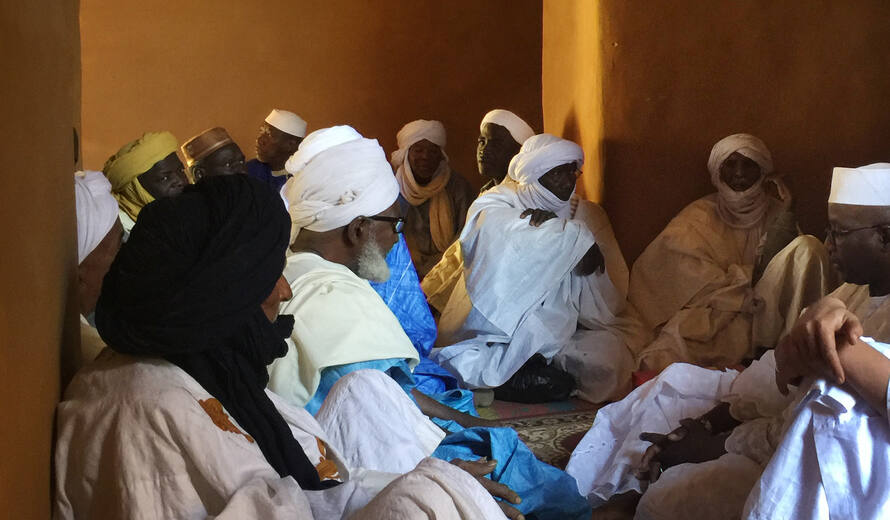 The ceremony, held at the Mosque of Djingareyber, began in the early morning hours with the sacrifice of animals and reading of Quranic verses. It was intended to invoke the divine mercy to provide the basis for peace, cohesion and tranquility. The ceremony concluded with a Fatiha (prayers) pronounced by the imam of the Djingareyber Mosque. These religious rites also represent the rejection of intolerance, violent extremism and religious fundamentalism, which, in 2012, contributed to the destruction of much of the city’s rich cultural heritage.

In a message on this occasion, addressed to the people of Mali, the Director-General of UNESCO, Irina Bokova, stressed that this ceremony was the third and final stage in the cultural renaissance of Timbuktu. “We gathered here on 18 July 2015, for the inauguration of these mausoleums. This is our promise, and we held it together. In this effort we have rebuilt more than just monuments, we have forged bonds of friendship and nothing can undo them,” she said.

“These mausoleums are now once again standing. This is irrefutable proof that unity is possible and peace is even stronger than before. We did it and we can do it again,” she added.

European Union Ambassador Alain Holleville paid tribute to the community of Timbuktu in his remarks. “For the European Union, contributing to the safeguarding of the Malian heritage is a form of promoting culture as a factor of reconciliation and lasting peace, and is part of our reconstruction and development priorities in Mali.”

Beatrice Meyer, Resident Director of Cooperation at the Swiss Agency for Development and Cooperation was equally complimentary of the efforts of all involved. “I am very pleased that this heritage has been preserved and protected thanks to the enormous commitment of local communities, with the support of international cooperation,” she said.

The head of families, Sekou Baba, meanwhile thanked the international community for its support. “We were fed on hope and rebuilt our mausoleums. It is done. We look forward to this ceremony that connects us back to our saints.”

Finally, Almamy Koureissi, speaking on behalf of the Minister of Culture, Handicrafts and Tourism of Mali, thanked the people of Timbuktu, and expressed gratitude to UNESCO and the technical and financial partners. “Culture is at the heart of government action because we have found our bearings, our cultural values. We need to embrace our moral center, to remain standing, open to the world, welcoming and hospitable in accordance with our legendary traditions.”

The mausoleums of Timbuktu have long been places of pilgrimage for the people of Mali and neighboring West African countries. They were widely believed to protect the city from danger. Sixteen of these mausoleums are inscribed on the World Heritage List and 14 were destroyed in 2012, representing a tragic loss for local communities. Due to this, the government of Mali, starting in May 2013, turned to outside partners, including UNESCO, for assistance. The preservation of ancient manuscripts and rehabilitation of 14 mausoleums destroyed by armed groups in 2012 began in March 2014 and concluded in July 2015.