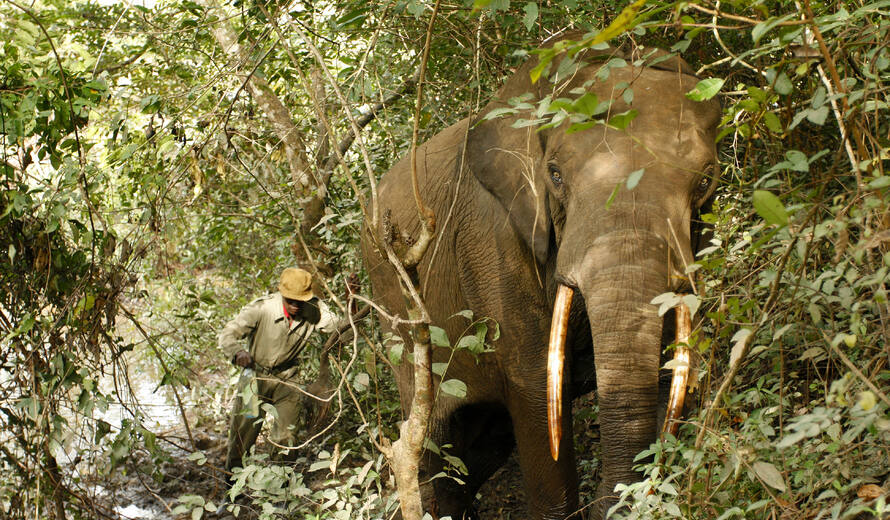 The Rapid Response Facility has made an emergency grant to Garamba National Park, Democratic Republic of Congo (DRC) to help tackle the continuing elephant poaching crisis there. Over 215 elephants have been killed in the past 18 months, and the park’s elephant population is now estimated to have fallen to between 1,100-1,400 individuals. If the poaching continues unchecked, it could lead to the complete eradication of elephants in Garamba within the next 8-10 years – a major loss of the Outstanding Universal Value for which the site was accorded World Heritage status.

Located on the border between north-eastern DRC and South Sudan, the current spike in poaching (which started in April 2014) is believed to be linked to the political instability and fighting in this highly volatile area. Poachers are heavily armed with modern weapons and plentiful ammunition, and frequently use helicopters. As well as the tusks, other body parts are also being removed from carcasses, meaning that all elephants – including calves – are targets.

Garamba National Park was inscribed on the World Heritage list in 1980, with its Outstanding Universal Value including the last population of northern white rhino, presumably lost, and its elephants. It has been on the World Heritage List in Danger list since 1996, due to pressure from poachers on its exceptional large mammal populations.

As well as the impacts on elephants, this unprecedented wave of poaching is having a devastating human impact. Just this month, four men (three rangers and one army colonel) were killed during an anti-poaching operation, adding to a rising death toll amongst personnel trying to protect the park.

The grant from the Rapid Response Facility to African Parks Network (which manages Garamba on behalf of the Congolese authorities) will be used to purchase long-range binoculars, cameras and night vision equipment to assist with the early detection of helicopters as they approach the area, and identification of the aircraft to help track the source of the poaching.

The Rapid Response Facility is a partnership between UNESCO and Fauna & Flora International dedicated to supporting natural World Heritage sites at times of crisis. The current RRF grant of $28,715 follows a grant from the fund in July 2014 to improve the park’s anti-poaching equipment, and a subsequent RRF crowd-funding appeal that paid for the rehabilitation of a ranger vehicle. The RRF support is part of a multi-donor response to the crisis, which has also included increased collaboration with the regional military task force supported by AFRICOM (The United States Africa Command), construction of new infrastructure to allow faster deployment of anti-poaching teams, and the extension of the communications network throughout the park.