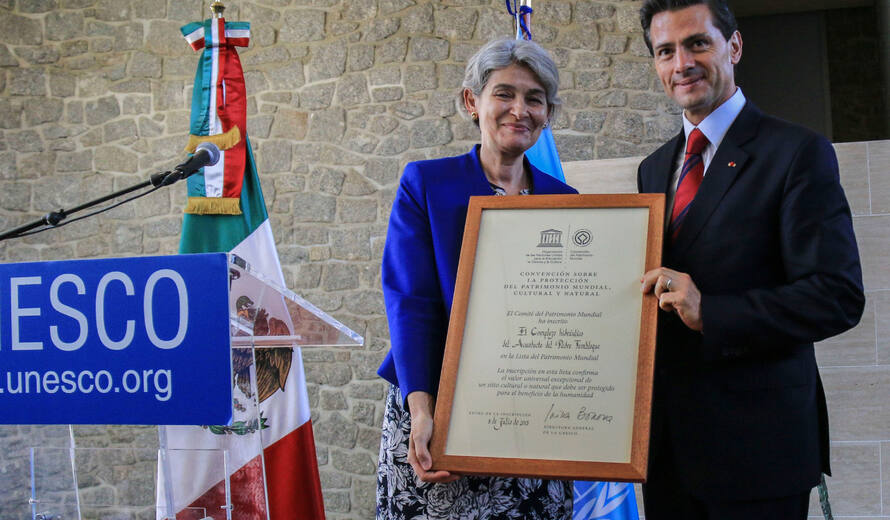 Director-General Irina Bokova presented the President of Mexico, HE Enrique Peña Nieto, the certificate of inscription to UNESCO’s World Heritage List of the Aqueduct of Padre Tembleque Hydraulic System during his official visit to UNESCO Headquarters today. The presentation of the certificate took place in the context of an official ceremony in the presence of the Chairperson of the Executive Board and Ambassador of Egypt, HE Mohamed Sameh Amr, and representatives of Member States to UNESCO.

“The recognition of the outstanding universal value of the Aqueduct of Padre Tembleque is part of this global vision of culture” that UNESCO shares with Mexico, said the Director-General. “The Aqueduct embodies the essence of UNESCO’s message – culture as a source of dignity, creativity and discovery of the other and of history”, declared Irina Bokova underlining the privileged cooperation between UNESCO and Mexico and reiterating the Organization’s commitment to accompany the country in its “vast national effort in favor of access to quality education.”

“With the inscription of the Aqueduct of Padre Tembleque, Mexico has established itself as a cultural and natural power,” said President Peña Nieto. “This certificate honors us and invites us to preserve the rich cultural heritage of our country for the benefit of present and future generations.”

After the ceremony presenting the certificate, the Director-General and the President of Mexico held a bilateral meeting during which they discussed issues of mutual interest including the importance of education for sustainable development, the protection of cultural heritage and safeguarding of cultural expressions, the fight against the illicit trafficking of cultural property and the importance of biosphere reserves in the context of the fight against climate change.

“UNESCO strongly supports the efforts of the Mexican Government in reforming its education system, as education is the foundation of the future of every country,” stressed the Director-General.

The President of Mexico thanked the Director-General for the support that UNESCO has been providing to the educational reform process in his country, which he described as a “process with a noble and necessary objective.”

For her part, the Director-General underscored some of the Organization’s priorities and reiterated her invitation to the Mexican President to participate in the Leaders Forum to be held in the context of the 38th session of the General Conference in November this year, when UNESCO will celebrate its 70th anniversary.

The Director-General also underlined the importance of UNESCO’s work in fighting against the illicit trafficking of cultural property, an issue of high priority to Mexico and to Latin America, as well as UNESCO’s efforts to prevent the destruction of cultural heritage in Iraq and Syria.

This was the second time the President of Mexico has visited UNESCO; the first visit was on 18 October 2012, in his capacity as President-Elect of Mexico.

On this visit, the President Peña Nieto was accompanied by the Minister of Foreign Affairs, José Antonio Meade, the Minister of Environment and Natural Resources, Juan José Guerra, the President of the Council for Culture and Arts, Rafael Tovar y De Teresa, the Director-General of the National Institute of Anthropology and History, Teresa Franco, the Ambassador and Permanent Delegate of Mexico to UNESCO, Porfirio Thierry Muñoz Ledo, and the Secretary-General of the Mexican National Commission for UNESCO, Socorro Rovirosa, , among others.

Inscribed on UNESCO’s World Heritage List on 5 July 2015, the Aqueduct of Padre Tembleque was built in the 16th century and is located between the states of Mexico and Hidalgo, on the Central Mexican Plateau. This heritage canal system encompasses a water catchment area, springs, canals, distribution tanks and arcaded aqueduct bridges.

The site incorporates the highest single-level arcade ever built in an aqueduct. Initiated by the Franciscan friar, Padre Tembleque, and built with support from the local indigenous communities, this hydraulic system is an example of the exchange of influences between the European tradition of Roman hydraulics and traditional Mesoamerican construction techniques, including the use of adobe. It was added to the 32 other Mexican sites already inscribed on UNESCO’s World Heritage List, which makes Mexico the country with the highest number of inscriptions in the Americas and the 6th highest worldwide.