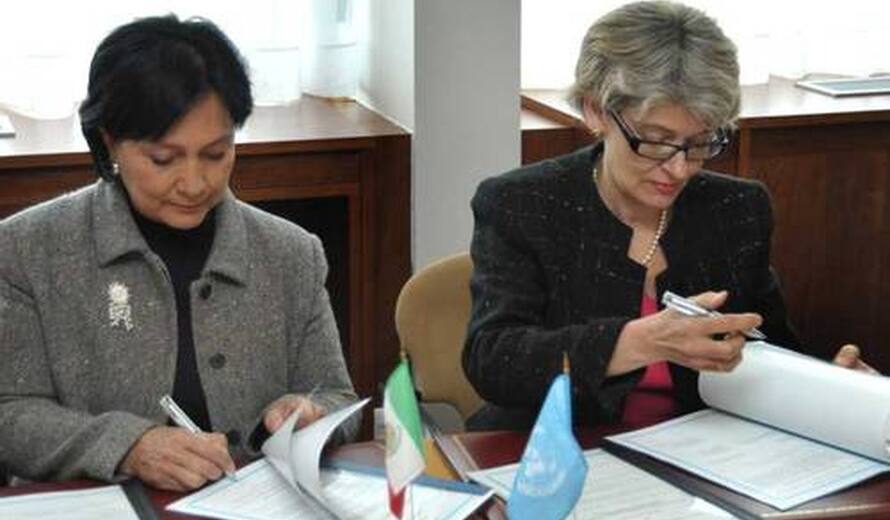 Director-General Irina Bokova and the Governor of the Mexican state of Zacatecas, Amália García Medina, signing the Agreement establishing, in Zacatecas, the Regional World Heritage Institute as a category 2 institute under the auspices of UNESCO (12/04/2010) © UNESCO / Patrick Lagès

On 12 April 2010, UNESCO Director-General Irina Bokova and the Governor of the Mexican state of Zacatecas, Amália García Medina, signed the Agreement establishing, in Zacatecas, the Regional World Heritage Institute as a category 2 institute under the auspices of UNESCO.

The Regional Institute of Zacatecas, which will be located in the ‘Casa del Conquistador’, the former home of the conqueror of the capital Zacatecas, will be part of a network of eleven institutes of training and research related to World Heritage, created by UNESCO as a category 2 institute, in other words, driven by national authorities but under the auspices of the Organization. The Institute will aim to educate and train those working to preserve humanity’s heritages. Its functions will comprise research, advocacy, dissemination, monitoring and management, not only of the cultural and natural wealth of Zacatecas and Mexico, but also of Central America and the Caribbean.

Noting the important and active role Mexico displays in protecting its heritage in all its forms – natural, cultural and intangible – Irina Bokova recalled that "heritage plays an extremely important role in the development of each country, we have the ambition that the new Centre can serve to emphasize the link between culture and development not only in Mexico but in other countries in the region." "We will work very closely with that goal, and will accompany local and national authorities in this initiative," said the Director-General at the signing ceremony of the agreement.

For her part, Governor Garcia Medina reiterated the commitment of her state and her country in the defence of heritage preservation. She announced that the new Centre will have its first technical meeting in September 2010, under the Periodic Report for World Heritage in Latin America and the Caribbean. "It is an honour for Zacatecas to be able to collaborate with UNESCO in safeguarding heritage. We'll work with dedication and together with specialists from the World Heritage Centre," said the Governor.

The Historic Centre of Zacatecas was founded in 1546 and was inscribed in UNESCO’s World Heritage List in 1993, according to criteria (ii) and (iv).